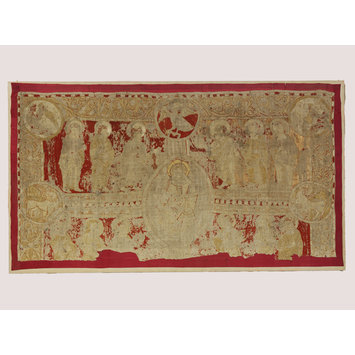 Altar frontals were introduced as liturgical furnishings in the fifth century. These textiles, often richly worked, introduced a welcome note of colour and ornament to the church interior, but their purpose was principally symbolic. The altar they covered, considered by the church to be Christ's table, was vested with a great spiritual significance. The sanctity of the altar was thus conveyed by the fine materials and elaborate techniques employed in the frontal that covered it. This particular altar frontal was identified by Donald King as the earliest example of its type in existence.

While it is not known for whom the frontal was commissioned, we do know that it came from La Seo de Urgel in northern Catalonia, which has long been a seat of episcopal power for the Roman Catholic church.

The frontal is of linen, embroidered with red, pink, yellow and white silk threads. The now much faded scene depicted on the frontal is that of Christ in Majesty, surrounded by the four evangelists and the twelve apostles; this is one of the more conventional subjects that constitutes part of the great wealth of Christian iconography.

Altar frontal of linen, embroidered with coloured silks in different shades of red and yellow. Rectangular, divided into four parts by two bands of decoration forming a cross: in each of the four smaller panels are three figures of apostles on a red ground, with a continuous inscription between their heads. In the centre of the cross is a vescia-shaped glory containing the seated figure of Christ in Majesty with traces of lettering on each side (see Marks/Subjects). At the ends of the crossed bands are medallions with the symbols of the evangelists, a lion, an eagle and an ox. In the corners are medallions with the Rivers of Paradise, which are represented by nude figures holding urns. Around the whole runs a broad band of conventional acrolling foliage, interrupted by the medallions, with a narrow chequered border. The ground is in two shades of dark and light red (now much worn). The bottom of the frontal containing the lower part of the second row of apostles, and the medallions with the symbols of S. Matthew, Hiddekel and Euphrates, is missing.

'A POS TOLI DO MI NI, ÑRI IH ESV XRIS TI'
Inscription embroidered between the heads of the apostles.

'VIA VERITAS'
In the centre of the cross is a vescia-shaped glory containing the seated figure of Christ in Majesty with traces of lettering on each side.

A lion with 'SCS MARC', an eagle with 'S IOH' and an ox with 'S LVC'
Medallion with the symbols of the Evangelists.

The hanging came from La Seo de Urgel in northern Catalonia. According to the green catalogue, there is a silk-embroidered banner of St. Oth in the Barcelona museum that bears a strong resemblance to this altar frontal, indicating that both objects may be from the same workshop. 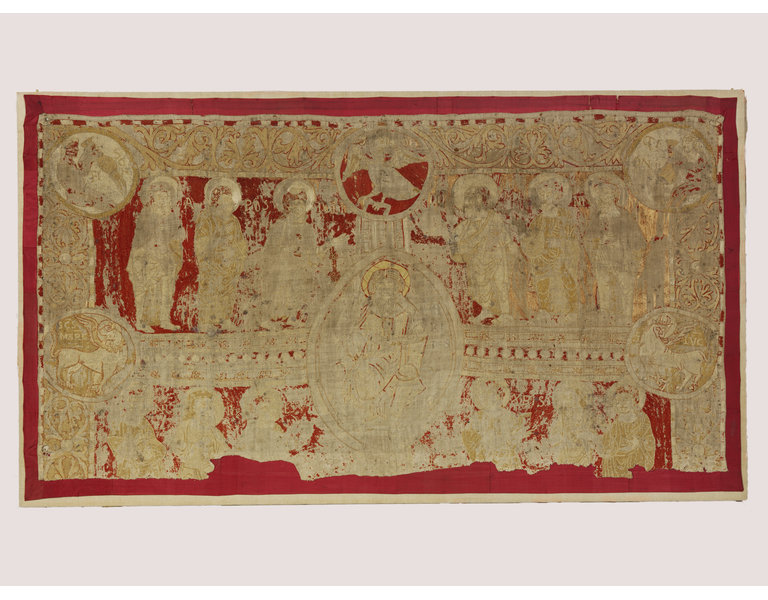