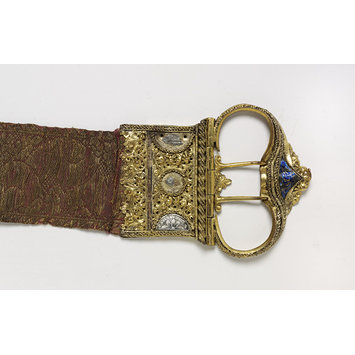 Girdles, or belts, were worn by both men and women in the Medieval period. From the mid-fifteenth century, fashionable women wore broad and short girdles like this one high on the ribcage, over a houppelande, a full-skirted, long-sleeved outer robe. Girdles owned by the wealthy were made of fine and costly fabrics and often embellished with silver or gold decorative fittings along their length. The elaborately-worked buckles and strap ends were usually decorated with enamels or niello, often with a family coat-of-arms and/or inscriptions. The textile used for this girdle incorporates gilded silver threads, and would have been woven by a single weaver working on a small tablet loom. The buckle and strap end appear to be gold, but in fact are gilded base metal, with applied plaques of enamelled and engraved silver. This is a rare example of a fifteenth-century cloth-of-gold girdle complete with its original mounts.

The girdle is tablet-woven lampas, the ground is 5-shaft satin and the pattern is 1:2 S-twill. The warps are silk, pink threads without a visible twist, 60 per cm. The binding warp appears to be yellow silk. The ground wefts are cream silk, without a visible twist, 32/33 cm. The pattern wefts are strips of gilt silver wound in S around a yellow S-twist core, 32/33 per cm. It was originally completely reversible but in one area on the reverse (the section worn next to the wearer's body) the gold thread has been snipped away to leave only the plain satin ground.

The buckle and strap end are cast and gilded, the flower-shaped mounts round the belt-holes are stamped brass.

AMORE. VOL
Italian, 'Love wants'
Nielloed on a semi-circular plaque set into the belt end.
The words are the start of a saying popular in fourteenth- and fifteenth-century Italy (and perhaps earlier), which states that 'love wants (or needs) fidelity' (see Musacchio: 2008, p.101).

'SPERA. IN DIO'
Italian, 'Have faith in God'
Nielloed on a semi-circular plaque, set into the belt end.

Unidentified coat of arms in an eight-pointed shield, nielloed on a silver plaque set in the centre of the belt end.

This girdle was almost certainly commissioned as a gift, but the context in which it was given is not known. The inscriptions that refer to love, faith and fidelity suggest it was a betrothal present, although there is only one coat of arms (unidentified, on the belt end). By comparison, a girdle now in the British Museum is more clearly associated with a marriage. It has two different coats of arms on the buckle and strap end (probably connected to the Malatesta family of Rimini), and facing profile heads of a man and a woman flank the arms on the buckle (see Herald : 1981, p. 180).
Three other girdles with similar metal mounts to the V&A example, but woven with the arms and family device of Pope Julius II, were diplomatic gifts. Between 1494 and 1512, Julius presented the belts to James I of Scotland, Ladislaus II of Hungary and the Confederation of Swiss Cantons. These girdles are preserved at Edinburgh Castle, the National Museum of Hungary, Budapest and the Landesmuseum, Zurich.
No documentation exists to explain the circumstances behind the creation of the V&A girdle. It was purchased by the Museum in 1857 for the sum of £40. The V&A is grateful to Dr Lisa Monnas for sharing her expertise (in 2004) on the techniques of weaving used to make this girdle.

Girdle of silk and silver-gilt thread, the buckle and strap end of base metal, gilded, enamelled and set with nielloed silver plaques, the flower-shaped mounts of brass, Italy, ca. 1450

The girdle was a powerful symbol of chastity within marriage and a treasured fashion accessory. This made it a popular gift for brides at all social levels. It was worn around the waist with one end hanging down in front. This one, with its original cloth of gold, has amorous and religious inscriptions on the buckle. [05/10/06- 07/01/07] 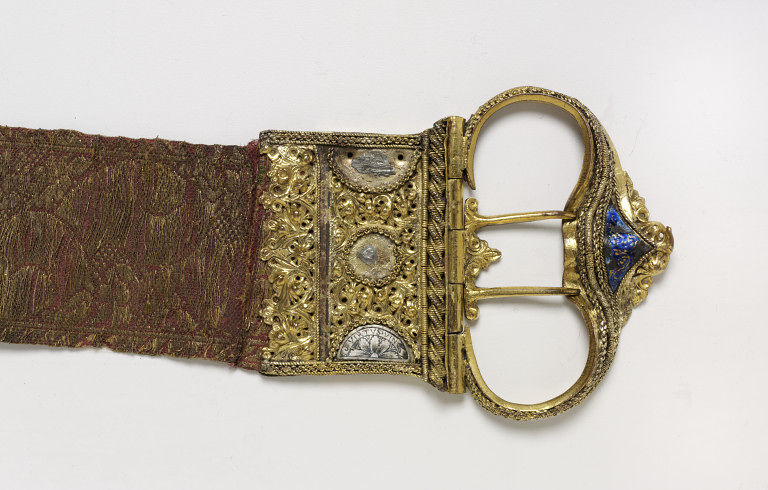