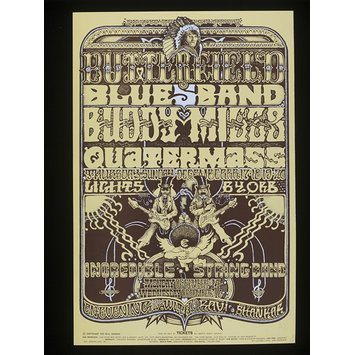 19th-century ‘Wild West’ posters, advertising circuses or medicine shows, were also an important influence for the poster artists of the psychedelic era. The popular idea of the Native American, representing the ‘outsider’, living an simple, communal life, struck a romanticised chord among the hippies, as did the long hair and traditional dress.

Norman Orr was the youngest artist of the Fillmore group, hired in 1970, fresh out of high school, and fascinated by the imagery of the American West. His style combines the essential publicity techniques required to promote the events, with spiritual and political themes. He was particularly interested in the place of the Native American in American culture, and they became a recurring motif in a number of his posters. Here, Orr has combined a number of ‘Wild West’ references; a chief is pictured in a feathered head-dress, and two top-hatted 19th-century figures play guitars. Also included is the curious image of a cherub with a large afro hairstyle. This is, in fact, a portrait of the drummer and blues vocalist, Buddy Miles, who is listed in the line-up. Miles led an eclectic career working with everyone from Jimi Hendrix to Mike Bloomfield of the Paul Butterfield Blues Band, who headline this event.

Psychedelic poster advertising a concert for the Butterfield Blues Band, Buddy Miles, and Quatermass, printed in black and yellow. The event details fill most of the space, and motifs such as the head of a Native American chief, two bearded guitatists, and a putto with an afro, are incorporated into the poster's design. The lettering reads, 'Butterfield Blues Band, Buddy Miles, Quatermass, Thursday - Sunday December 17, 18, 19, 20, Lights by Orb, 1970 Poster by Orr, © Bill Graham, Incredible String Band, Monday December 14, Wednesday December 16, An Evening In With Ravi Shankar'. The lettering and imagery evoke a sence of 'the wild west'. 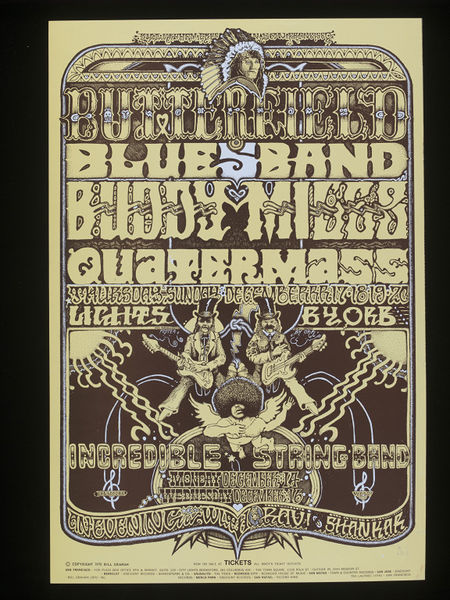