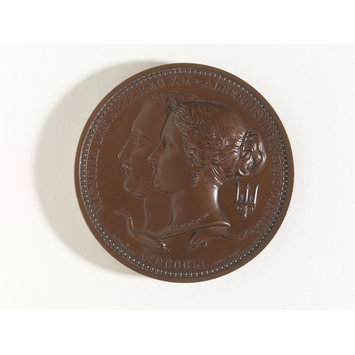 Prize Medal for the Great Exhibition of 1851

The Prize Medal was presented to at least 2,913 exhibitors from the Great Exhibition of 1851. The Royal Commissioners recommended it should be awarded by the Juries 'Wherever a certain standard in excellence production or workmanship had been attained- utility, beauty, cheapness, adaptation to particular markets, and other areas of merit'. The medals were awarded alongside a certificate illustrated with detailed engravings of the medal design, and a copy of the extensive Juries’ reports compiled on the exhibits.

This is one of the five official medals commissioned for the Great Exhibition, and presented on behalf of Queen Victoria. They were struck in bronze, the metal considered most appropriate for the development of superior skill and ingenuity in medallic art. This reflected the Great Exhibition’s mission of promoting British manufacturing through encouraging excellence in industrial design, and developing public taste. Figures embodying the Four Continents and the Latin motto on the medal reverse design reflect the international aspirations of the Great Exhibition; the event was promoted as a truly international cultural showcase and an example of collaboration between nations in which Britain could prove herself.

This example is inscribed around the edge to the School of Design and forms part of a leather- bound and gilded, book-shaped set of all five medals presented to the Department of Practical Art, a government body set up as a direct result of the Great Exhibition. Henry Cole, Prince Albert’s Chief advisor for the Great Exhibition of 1851, became the first General Superintendent of the Department of Practical Art. It was responsible for Art education in Britain and set up the Museum of Ornamental Art in 1852, the precursor of the Victoria and Albert Museum.

Bronze medal with obverse depicting conjoined profile busts of Queen Victoria and Prince Albert, facing left. Two dolphins sit below the busts and a trident to the right. Victoria wears a laurel and jewellery. Beading decorates the rim.

The reverse design depicts a seated female figure of Britannia crowning a kneeling female figure of Industry with a laurel. Behind stand four attendants in a row, embodying the Continents Europe, Asia, Africa and America. Piled up on the ground surrounding the group are artefacts of art and industry including a bust, a decorated vase and a cogged machinery wheel.

The Prize Medal was issued to at least 2,913 of the ca. 17,000 exhibitors in the Exhibition of the Works of Industry of All Nations of 1851, known as the Great Exhibition. Five official award medals were designed for the Exhibition, to be presented on behalf of Queen Victoria. They were struck in bronze, the metal considered by the Royal Commissioners 'better calculated than any other for the development of superior skill and ingenuity in the medallic arts'. This reflected the Exhibition’s objective of promoting British manufacturing through encouraging excellence in industrial design, and developing public taste. The figures of the Four Continents, and the quote on the medal’s reverse, reflect the aspirations of the ‘Exhibition of the Works of Industry of All Nations’; the event was promoted as a truly international cultural showcase, and a collaboration between nations, in which Britain could excel.

The Royal Commissioners (Members of the Royal Commission, established in 1850 by Queen Victoria to organize the Great Exhibition of 1851, and actively presided over by Prince Albert) recommended the Prize Medal should be awarded by the Juries 'Wherever a certain standard in excellence production or workmanship had been attained - utility, beauty, cheapness, adaptation to particular markets, and other areas of merit'. They were awarded alongside a decorative certificate illustrated with detailed actual size engravings of the medal design, and an Octavo (small) copy of the extensive Juries’ reports on the exhibits. Manufacturers and Artisans valued the medals for their prestige and for advertising purposes.

The Great Exhibition was split into four main groups of exhibits reflecting the different stages of industrial production: Raw Materials; Machinery; Manufactures and Fine Art. An elaborate system of Juries was established and overseen by the Royal Commission and the award decisions were brought before ‘Groups’ and the Council of Chairmen, who attended meetings and advised on the award principles established where clarification or guidance was needed, but did not have any authority in awarding the prizes. It is made clear in the published Commissioners Report, and the introduction to the Reports of the Juries, that a rigorous and impartial system of prize awards for exhibits, based on merit, was considered very important, and a great deal of work was put in to strive to make it as fair as possible; this was to ensure a high level of prestige surrounded the awards, and that they reflected and encouraged the organiser’s ideals in manufacturing and design. Ensuring half the Jury members were from the 33 foreign countries exhibiting validated the international status claimed for the Exhibition. Instructions to the Juries show that the Council impressed they were very keen to ensure the most impartial distribution of prizes.

Although initially a prize fund of up to £20,000 was allocated, money was soon rejected as the principle award system for the Great Exhibition, as was a traditional system 3 tier system of medal prizes, such as those used in the French ‘Expositions’. The Juries complained it was unfeasible to judge degrees of merit in exhibitors of different nations, with products that must be judged on different standards, to determine comparable degrees of excellence. Indeed some of the best English manufacturers initially threatened to not submit exhibits; with little faith relative merit could be assessed fairly, they were concerned that if they lost out on a ‘first prize’ then their business and reputation would suffer. The Royal Commission concluded that their intention to encourage a range of industry and innovation did not suit individual competition and comparison, declaring: ‘It is the wish of the Commissioners to reward excellence in whatever form it is presented’. Rewards were therefore to be largely confined to the honorary distinction of a Medal, although there were some discretionary monetary gifts allowed as well in certain circumstances. Honourable Mentions and associated certificates were also issued.

The Prize Medal is one of the three medals originally conceived by the Royal Society of Arts as prize awards for the Great Exhibition of 1851, all featuring reverse designs chosen by international public competition. 129 entries were received, exhibited and judged anonymously at the Royal Society of Arts. Three of these were awarded the prize of £100 and selected for the reverse of what later became the Jurors, Prize and Council medals. Complementary Latin inscriptions were chosen from classical literature by a committee including future Prime Minister William Gladstone. The obverse (front) design of the conjoined heads of Queen Victoria and Prince Albert was commissioned from William Wyon, medallist and Chief Engraver of the Royal Mint. The winning design on the reverse of this medal is by his son, the London medalist, modeller and die engraver Leonard Charles Wyon. He uses the convention of four female figures to represent The Four Continents. The concept appeared in Cesare Ripa’s Iconologia, an illustrated book of emblems widely used by artists from the 1600’s onwards. Africa has her attribute of the elephant headdress. A detailed and skilled wax model for the reverse of this Medal by Leonard Wyon is in the V&A’s collections.

When the Jurors met they recommended only two selective award medals, for the reasons discussed above, and added in the ‘Honourable Mention’ which would only award a certificate. The third medal design was appropriated by the Commission so they could award these to the Jurors themselves for their massive undertaking. In addition they prepared two other smaller medals: one for all exhibitors and one for those who have rendered service to the Exhibition. All exhibitors received the Exhibitors Medal, apart from those already awarded the more exclusive Council Medal or Prize Medal. Although not intended overtly as a second prize, The Prize Medal was the second largest and awarded more often than the Council Medal. Tellingly, it's working title during much of the process was the 'Ordinary' medal, whilst the Council Medal was referrred to as the 'Great' medal.

The striking of the medals was awarded as a private commission to William Wyon. Four of the official medals were struck at the Royal Mint before he died, and it was his son, Leonard, who completed the medal production for the Royal Commissioners. Obverse and the reverse hardened steel dies for this medal were given to the V&A in 1921. They were used to strike comparatively soft round blanks of Bronze to form the medal designs. William Wyon’s illness meant that the Official medals were not ready to be distributed at the closing ceremony of the Great Exhibition in 1851, and his subsequent death delayed the inscribing of the edges and the distribution of the medals to recipients. The Prize Medal was the third to be finished.

There are subtly different versions for the Reverse design of this medal. Although it is part of a presentation set, this version is consistent with those awarded individually to exhibitors: there is a full stop after ‘LIGAVIT.’, and the signatures are in two separate lines.

Medal, Prize medal for the Great Exhibition of 1851 depicting Queen Victoria and Prince Albert, inscribed to the School of Design, struck bronze, by William Wyon and Leonard C. Wyon, London, 1851 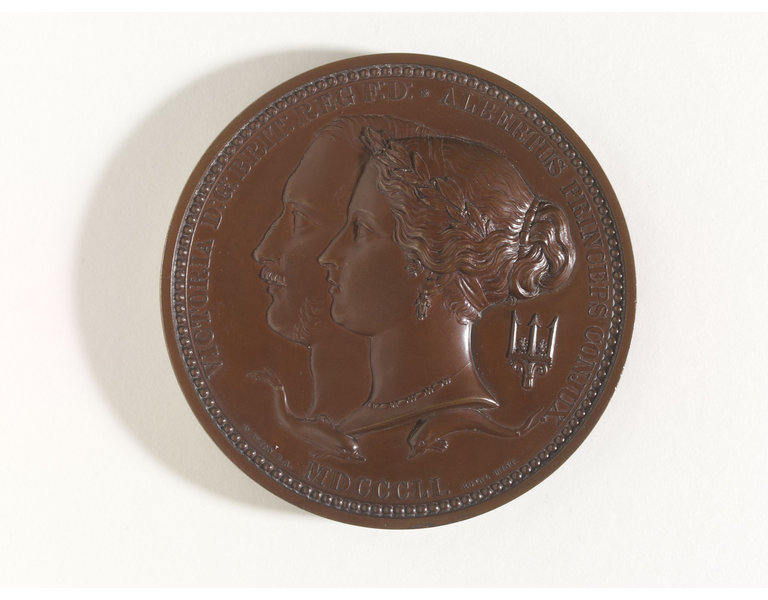