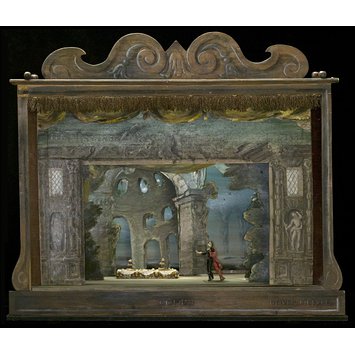 Robert Helpmann (1909-1986) asked Messel to design costumes and sets for his first ballet as a choreographer, Comus, presented by the Sadler's Wells Ballet at the New Theatre, London, in January 1942. Messel had designed Helpmann’s costume as Oberon in A Midsummer Night’s Dream in 1937. Messel’s feel for period style made him a suitable designer for a ballet based on a seventeenth century masque by John Milton (1645).

Critics highlighted the painterly quality of Messel’s costumes and sets; the Dancing Times reported ‘The colours are rich and subdued, like the patina of an old painting’ (Dancing Times, February 1942). This set model shows Scene 2, Comus’ palace, in which Comus, the Greek god of festivities and revelry, attempts to enchant a lady and transform her into one of his half-bestial creatures.

Set model by Oliver Messel for Comus's palace, scene ii, in a Sadler's Wells Ballet production of Comus, 1942. A wooden box containing the set, carved and painted in Baroque style. A false proscenium arch, backcloth and four cutcloths. Rows of trees in recession. In the middle distance, yellow curtain. Columns and arches seen in the distance. Trees painted on the backcloth. A miniature banqueting table garlanded in gold, with cake or food stands on it. A figure of Comus in wood, gesso, modelling clay painted in oils, white and gold paint. At the top of the false proscenium is painted drapery and a border of silver fringe; at the sides pink-mauve velvet strips.

'COMUS OLIVER MESSEL'
Paint inscription on the bottom of the wooden frame.

'CASE/NO.23/COMUS'
White chalk inscription on the back of the model.

'GERMANY 1951'
Ink inscription written on the label on the back of the wooden box.

Comus, a Masque in one act after a poem by John Milton (1645). Choreography by Robert Helpmann. Music by Purcell, arranged by Constant Lambert. Presented on 14th January, 1942, by the Sadler's Wells (now Royal) Ballet at the New (now Albery) Theatre, London. With Margot Fonteyn as The Lady, Robert Helpmann as Comus.
Lord Snowdon, Oliver Messel's nephew, inherited Messel's theatre designs and other designs and artefacts. The designs were briefly stored in a disused chapel in Kensington Palace before being housed at the V&A from 1981 on indefinite loan. The V&A Theatre Museum purchased the Oliver Messel collection from Lord Snowdon in 2005.

According to Ralph Dyer (TM Personal File) , Messel's assistant in the early part of his career, Messel made copies of his set models to be exhibited at the British Council. Dyer claims to have made the models himself to Messel's designs. 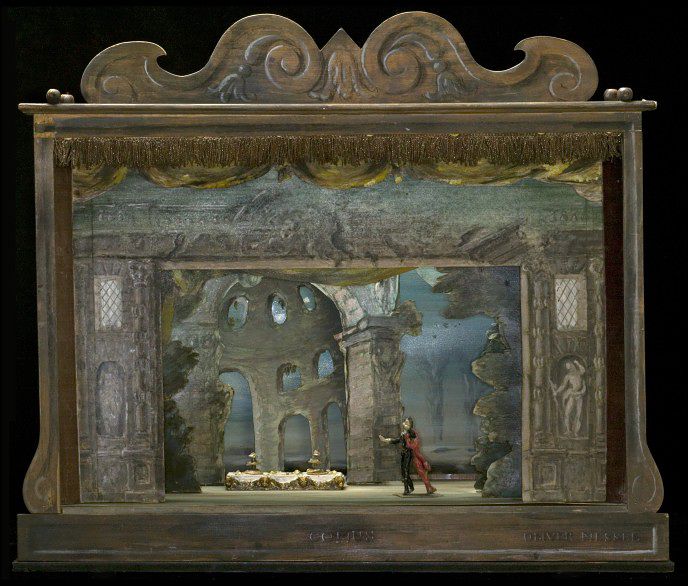