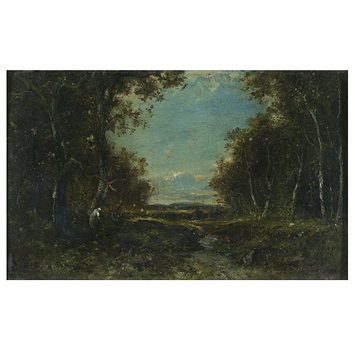 Narcisse-Virgile Diaz de la Peña (1807-1876) was a French painter of Spanish origin. He initially worked as a porcelain painter in 1825 but quickly began training with the artist François Souchon (1787-1857). He soon became acquainted with some of the most famous exponents of the Barbizon school, such as Honoré Daumier (1808-1879), Théodore Rousseau (1812-1867) and Paul Huet (1803-1869). He regularly exhibited landscapes and genre scenes at the Salon from 1831 to 1859. At the end of his life, he was admired by the new generation of artists who were about to form the Impressionist movement.

This painting is a fine example of Diaz de la Pena's mature style. It shows a landscape framed by trees on each side, while a path runs through in the centre. On the left stands a small female figure. This anecdotic subject in which human presence is almost banished is typical of Diaz' oeuvre while the free, broken brushwork is typical of the Barbizon school, whose exponents were seeking for an objective rendering of nature with a deep interest in light effects.

On either side a wood; in the centre a stretch of grass with a path running through it; hills in the distance; a female figure by trees to the left.

Historical significance: This painting is a fine example of Diaz' mature work. It depicts a landscape framed by trees on each side that conveys the spectator's eye towards the central glade. A path is running through while a small female figure stands on the left. The broken brushwork and free technique is typical of the school of Barbizon, of which Diaz is one of the most authoritative exponents. He tended to favour a palette of earth tones and greens pervaded with flecks of white and pale yellow such as in the present work. The compositional formula employed here, a landscape framed with trees with a central focus on a more empty area, is recurrent in Diaz' oeuvre from the 1850s.
Constantine Alexander Ionides bought the painting in 1883 from the merchant Hollander and Cremetti, along with two landscapes by Rousseau (CAI 55 and CAI 56) and L'Immensité by Courbet (CAI 59). It gives a good example of the collector taste for 19th-century French paintings, especially in the realist style. The four works were bequeathed to the museum in 1900.

19th-century French art is marked by a succession of movements based on a more or less close relationship with nature. At the beginning of the century, Romantic artists were fascinated by nature they interpreted as a mirror of the mind. They investigated human nature and personality, the folk culture, the national and ethnic origins, the medieval era, the exotic, the remote, the mysterious and the occult. This movement was heralded in France by such painter as Eugène Delacroix (1798-1863). In its opposition to academic art and its demand for a modern style Realism continued the aims of the Romantics. They assumed that reality could be perceived without distortion or idealization, and sought after a mean to combine the perception of the individual with objectivity. This reaction in French painting against the Grand Manner is well represented by Gustave Courbet (1819-1877) who wrote a ‘Manifesto of Realism’, entitled Le Réalisme published in Paris in 1855. These ideas were challenged by the group of the Barbizon painters, who formed a recognizable school from the early 1830s to the 1870s and developed a free, broad and rough technique. They were mainly concerned by landscape painting and the rendering of light. The works of Narcisse Virgile Diaz de la Peña (1807-1876), Jules Dupré (1811-1889), Théodore Rousseau (1812-1867), Constant Troyon (1810-1865) and Jean-François Millet (1814-1875) anticipate somehow the plein-air landscapes of the Impressionists. 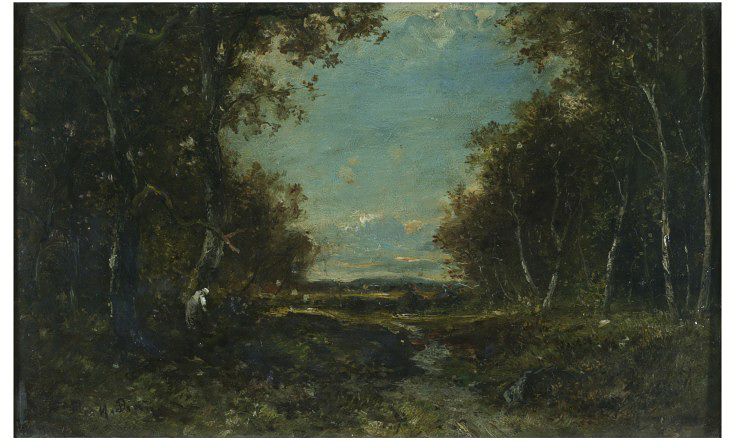