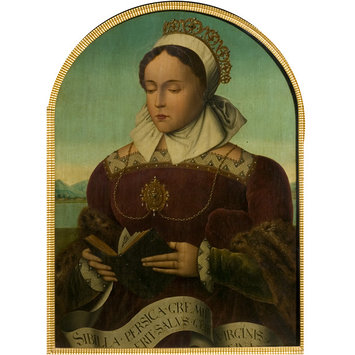 Ambrosius Benson (ca. 1495-1500-1550) was a Flemish painter of Italian origin, probably born in Lombardy in Italy. He was a member of the Guild of St Luke in Bruges by 1519 and initially worked in the studio of Gerard David (ca.1460-1523), the official painter of Bruges at the time. He rapidly became a successful painter in Bruges along with another David's pupil Adriaen Isenbrabdt, and had a prolific output: he painted a few portraits and specialised in religious scenes.

This painting is a 19th-century pastiche of a common theme that Benson developed in many versions: the half-length female figure reading. This subject matter was favoured by the artist who produced many of them including indifferently figures of saints and sibyls.

A richly dressed half-length female figure is holding a book in her hands. She wears a red velvet dress with fur at the elbows and green velvet on the forearms, a white cap with a jewelled coronet, and a scroll at the bottom identifies her as the 'Sibilla Persica'.

'SIBILLA. PERSICA. GREMIV. VIRGINIS.ERIT.SALVS.GETIV.ET.IN.VIS..'
Inscribed on the scroll at the bottom

Constantine's plans concerning his collection conformed to a more 'public-welfare' vein of thought than his father or brother. He decided to donate his collection to the Victoria & Albert Museum, instead of privately distributing it or disposing of it in a Sales room.

Historical significance: This painting is a nineteenth-century pastiche, ultimately derived from the figure of the Persian Sibyl in the right corner of Ambrosius Benson's Madonna with Prophets and Sybils in the Koninklijk Museum voor Schone Kunsten, Antwerp (no. 262). Essentially the same figure was utilised for various other representations of half-length females, such as the Woman at Prayers, Koninklijk Museum voor Schone Kunsten, Antwerp and the Mary Magdalene reading, National Gallery, London (NG655).

Ambrosius Benson (ca. 1495/1500-1550) was a Flemish painter of Italian origin, probably born in Lombardy. He was a member of the Guild of St Luke in Bruges by 1519 and initially worked in the studio of Gerard David (ca.1460-1523), the leading painter in the city. He became a successful painter, with a prolific output, principally of religious subjects.

The Persian Sibyl is one of ten prophetic priestesses mentioned in various classical sources. She was believed to have presided over the Apollonian Oracle, and to have prophecied the deeds of Alexander the Great. The Sibyls acquired a Christian significance comparable with the prophets of the Old Testament because they were believed to have prophecied the coming of Christ, and two half-length representations of Sibyls holding books appear on the exterior shutters of the Ghent Altarpiece by Jan van Eyck, dated 1432. 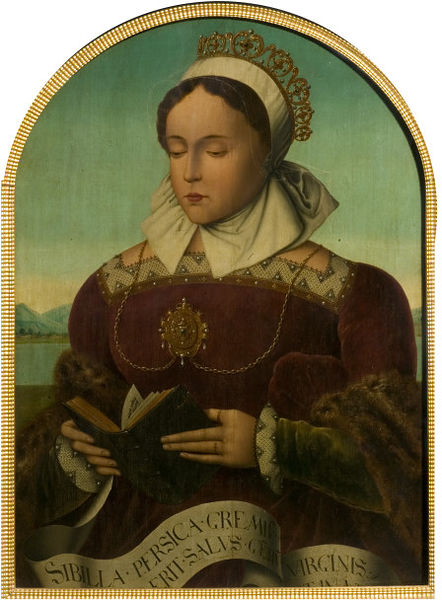