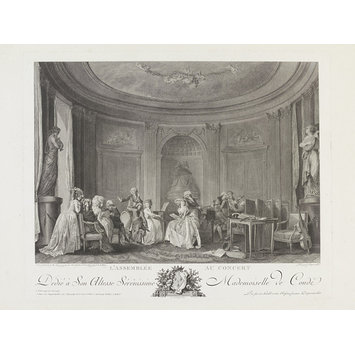 This engraving and etching is one of a pair (along with L’Assemblée - Au Salon, museum number E.365-2013) made by François Dequevauviller based on gouache paintings by Nicholas Lavreince. Nicolas Lavreince (real name Niclas Lafrensen) was a Swedish miniaturist, draughtsman and gouache painter active in Paris until 1791. Originally his father’s pupil, he visited Paris 1771-3 before returning to Sweden where he was made a member of the Stockholm Academy. Returning to Paris in 1774 he made numerous models for engravers including the gouaches on which these two prints are based.

According to Anne Leonard, L’Assembléee au Concert … “signaled a new importance of music in the private realm. Present in this intimate gathering is an unprecedented figure: a man standing and imposing silence on the listeners as the musicians appear to finish tuning their instruments. Lavreince’s choice of the moment just before the music begins is the device that allows him to show its privileged place. Music has won the honour of being an object of attention in itself rather than a mere accompaniment to a social gathering."
Art Bulletin, Vol. 89, no. 2, June 2007, 266-286.

Interior of an oval music room. There is a large niche decorated by a garland set into the back wall, in which stands a large vase with lid topped by an eagle. Two classical statues representing muses on circular pedestals decorated with garlands are on either side of the room, one holding a lute, and the other a lyre. Ten Ionic style pilasters with additional garland decorations line the oval-shaped walls. There are two windows left and right, one of which, on the left hand side of the picture, lets light into the room. A screen decorated with portrait medallions and garland decoration is to the right of the room. The ceiling is decorated with painted cherubs and garlands and on either side of the niche on the back wall are images of cherubs playing musical instruments. On the floor is a large circular rug patterned with diamond shapes, garlands of roses and acanthus scrolls.

There are three ladies and one man near the window having a conversation. A concert is in progress. Four men to the right of the image are playing flutes and violins and reading from sheet music. A woman in the centre is playing a harpsichord, and the man next to her is playing a bass viol or a cello. At the extreme right of the picture, in the foreground, a cello is resting on the arm of a chair, a violin is lying on the table and a French horn is visible on the floor partially behind the cello case.

In the middle of the lower margin below the image is a representation of the coat of arms of Louise Adélaïde de Bourbon, topped with a coronet and set amongst roses.

L’ASSEMBLÉE AU CONCERT
Title: Below image in lower margin, centre, on either side of coat of arms.

Dédie à Son Altesse Sérénissime Mademoiselle de Condé
Below image in lower margin, centered, on either side of a coat of arms

Purchase from Emanuel von Baeyer, with support from printseller. RF 2013/899. 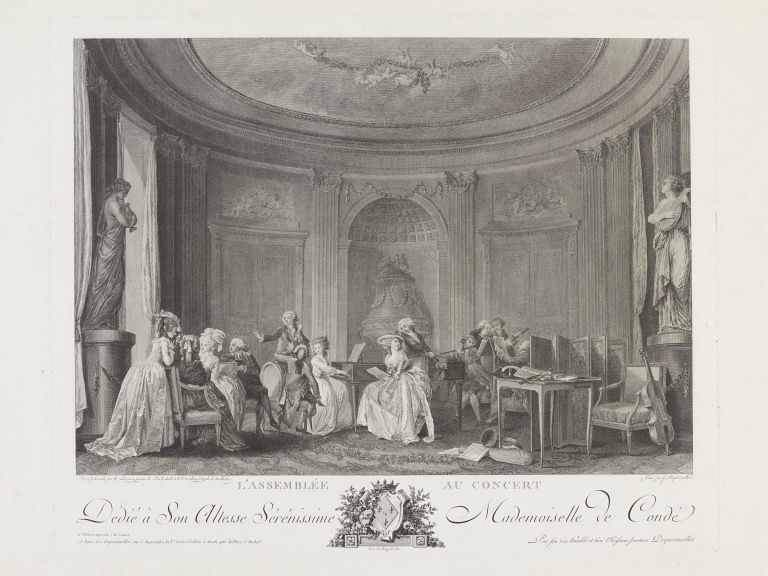