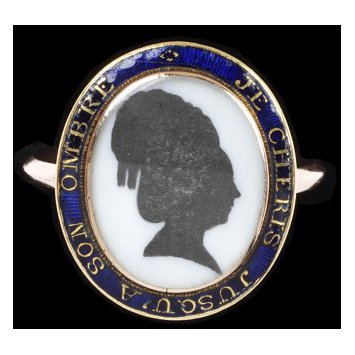 Miniature profiles or 'shades' became extremely popular in the second half of the eighteenth century. The image was creating by placing the sitter between a bright light and a plain white piece of paper. The outline of the shadow was traced onto paper or ivory, making a quick and accurate representation of the sitter with a sitting of a minute or less. The image was then worked up on paper, glass or ivory to create often very finely detailed portraits. 'Profiles' or ‘shades’ were an affordable and fashionable form of portraiture, used to create images for friends or family or profiles of celebrities and society figures. The resulting images could be made in sizes to fit miniature cases, lockets, brooches or rings.

Profiles became even more fashionable after about 1775, when Johann Kaspar Lavater published his hugely popular Essays on Physiognomy, illustrated with a series of profiles. He claimed that one could detect a person’s character by concentrating on his or her main features and that “Shades are the truest representation that can be given of man”.

This ring, which closely resembles contemporary mourning rings, is inscribed in French around the bezel, 'Je chéris jusqu'a son ombre' (I cherish even her shadow). Labels on profiles sometimes made a play on the idea of the shadow or shade as a substitute for the original sitter. A profile painted on glass by William Holland of Dublin claims that 'Dans l'absence du reél, l'ombre me contente' (in the absence of the real, I am contented with the shadow) and a pair of mourning silhouettes are inscribed 'Il ne me reste que l'ombre' (only the shadow remains with me).

Love and mourning rings could share the same language. A ring with a silhouette and a panel of plaited hair such as this could have been a romantic gift or a mourning ring. A ring in the Koch collection has a similar blue enamel border around a central funerary urn with a border of hair and is inscribed 'Je chéris jusqu'a ses cendres' (I cherish even her ashes).

Enamelled gold ring, the oval bezel set with a silhouette of a woman with a locket of hair under the bezel. The border inscribed JE CHERIS JUSQU'A SON OMBRE. A French import mark from 1864 on the hoop.

Enamelled gold ring set with a watercolour on ivory silhouette and on the back, a panel of woven hair under glass

This ring was formerly part of the collection of Dame Joan Evans (1893-1977), art historian and collector. Early on she collected gems and jewels which resulted in the 1921 book, English Jewellery from the 5th Century BC to 1800 . She published widely on jewellery, French medieval art and architecture. Evans was elected the first woman president of the Society of Antiquaries in 1959 (through 1964). She was a trustee of the British Museum (1963-67). In her personal life, she donated time and money to many charitable historic causes, nearly all of them anonymously. Her will left collections to the Ashmolean Museum, Oxford, and the Birmingham City Art Gallery.

She gave her gem and jewellery collection to the Victoria and Albert Museum through a series of gifts, beginning in 1960. Her association with the museum went back to her childhood and she developed personal friendships with the museum curators and Directors. In 1975, two years before her death aged 84, Joan Evans made over her remaining jewels to the museum, choosing to remain anonymous during her lifetime. As she wrote jokingly to curator Charles Oman, her village was ‘divided into those who think it must have been me and those who say it cannot have been because I am so shabby.’

Enamelled gold ring, the oval bezel set with a silhouette of a woman with a locket of hair under the bezel. The border inscribed JE CHERIS JUSQU'A SON OMBRE. A French import mark from 1864 on the hoop, France or England, ca. 1780. 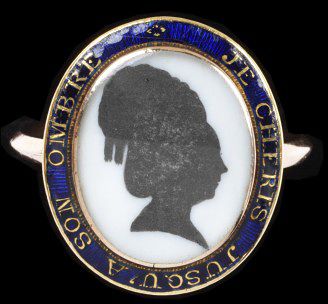