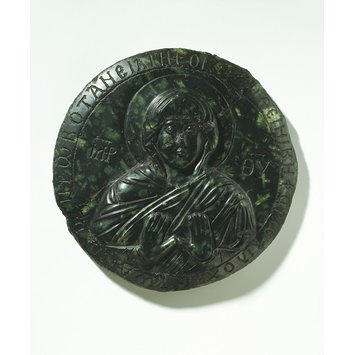 Datable Byzantine reliefs are extremely rare, so this circular carving is very important in the study of sculpture from Constantinople. It can be firmly dated and used as a comparison piece for dating other works. The inscription around the edge of the disk invokes the help of the Virgin for the aged Byzantine Emperor Nikephoros III Botaneiates (1078-1081) who was seventy-six when he reached the throne and it has been suggested that this roundel may have formed part of the decoration for his tomb.

A serpentine medallion carved with a bust of the haloed Virgin in prayer, wearing the maphorion, her hands raised with her palms facing outwards in the Orans position. An inscription runs around the edge of the roundel. The back has a roughly scratched outline of the bust of the Virgin and the letter M. The medallion was broken diagonally across the middle.

MP OY
An abreviated identifying inscription to either side of the Virgin's head.

The inscription around the edge of the disc invokes the help of the Virgin for the Emperor Nikephoros III Botaneiates (1078-1081).

In the Monconys Collection in Lyons by the 17th century; after 1661 in the Abbey of Heiligenkreuz near Vienna. acquired in 1927 by the Museum.

Historical significance: Orans or orant (latin literally meaning "praying") is the name give to an early Christian prayer posture: usually the body upright and frontal, and the open hands lifted to shoulder height on either side. It was a composition used to represent piety on many third century pagan and Christian sarcophagi and was adopted on many catacomb figures, both tomb owners and Old Testament figures. Though rare after the 8th century from when prayer was depicted by the inclined profile, the posture was retained throughout Byzantine art in the forms known as the Blachernitissa and Platytera.The present example is a less common form of the orans posture, both palms are shown, however the hands are only raised to the chest.

Datable Byzantine reliefs are of the greatest rarity, so this circular carving occupies a central positon in the study of the sculpture of Constantinople. Because it is so firmly associated with the Emperor Nikephoros III Botaneiates, it has been related to two further marble relies of the standing Virgin Orans and the Archangel Michael now in Berlin, which come originally from the monastery church of the Theotokos Peribleptos in Psamatia, Constantinople, but may be somewhat later in date (Belting 1972).This church was especially favoured by the emperor: he retired there after his abdication and was buried there and it has been suggested that the present relief may have formed part of the decoration of his tomb.

Certainly, in contrast to other hard-stone cameos of the same date, it is too large and heavy to have been worn, so an architectural setting - albeit of the highest luxury - is plausible. Known to ahve been in France by the seventeenth century, it was probably looted from Constantinople during the Fourth Crusade in 1204.
The iconographic type of the Virgin seen here - with her hands raised and palms facing outwards in front of her chest- is a slightly different version of the more common Virgin orans, usually shown with her arms raised to each side of her body . This variant also became widespread in the eleventh and twelfth centuries, being employed on leads seals, in wall paintings and in the closely related medium of cameo carving.

The above text is taken from Williamson's catalogue entry in Mother of God: Representations of the Virgin in Byzantine Art.

Nikephorous III Botaneiates born 1001/2 died ca. 1081. He was an active general in the Byzantine army from 1042 onwards and aided in the uprising of Isaac Komnenos. He led another revolt in1077 and with Turkish aid defeated the troops of the Emperor Michael VII near Nicea; following Michaels's abdication, Nikephoros entered Constantinople in 1078 and received the imperial insignia, marrying his predecessors wife Maria of Alania in 1179.
Already elderly, Nikephoros proved an ineffectual ruler, relying heavily on his advisors who benefited from his generosity at the expense of official salaries and the debasement of the nomisma. His short rule was plagued by rebellions and plundering Turks and he abdicated in 1081 entering the Peribleptos monastery, which he had restored. 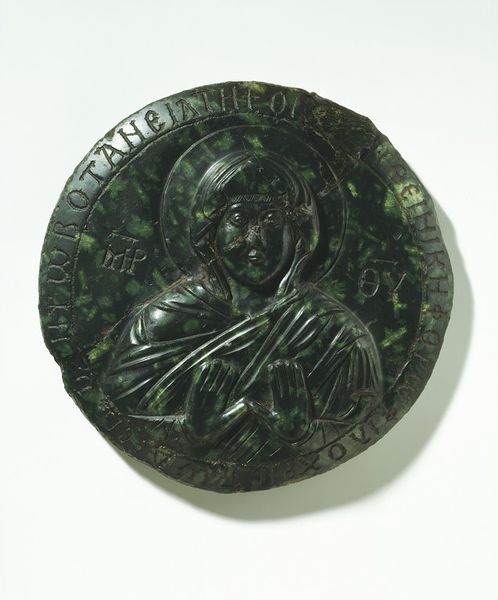