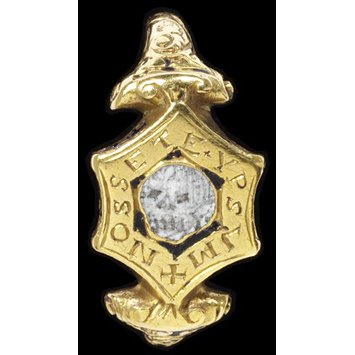 A devout Christian in sixteenth century Europe would be conscious of the fragility of life and the ever present threat of death, through disease, accident or if lucky, old age. Christians therefore felt the need to prepare their souls for everlasting judgment through prayer and reflection. 'Memento mori' (remember you must die) inscriptions and devices such as hourglasses, skulls, crossbones and skeletons became fashionable on many types of jewellery. A ring worn on the finger would be a daily reminder to prepare for life in the world to come. Rings decorated with this funereal imagery were also left in wills to family and friends.

The inscription on this ring reads: 'Nosse te psum', a variation on 'Nosce te ipsum' or 'know yourself', which was a popular motto on memento mori jewellery. In 1617, the will of Nicholas Fenay of Yorkshire describes a ring which was to be left to his son:
'having these letters NF for my name thereupon ingraved with this notable poesie about the same letters NOSCE TEIPSUM [sic know thyself] to the intent that my said son William Fenay in the often beholding and considering of that worthy poesye may be the better put in mynde of himselfe and of his estate knowing this that to know a man's selfe is the beginning of wisdom'. The inscription 'Dye to lyve' refers to the need to give up earthly life in favour of eternal life in Heaven.

Enamelled gold mourning ring, the hexagonal bezel with incurving sides, enamelled in white with a skull surrounded by the inscription + NOSSE TE. YPSUM and on the edge + DYE TO LYVE with volutes and foliated shoulders enamelled in black

inscribed + DYE TO LYVE
on the edge

Ex Waterton Collection. The custom of wearing a memento mori ring was obviously well known in sixteenth century England. Shakespeare alludes to it when Falstaff urges Mistress Tearsheet not to speak like a death's head in Henry Iv (act II, scene 4) and in Love's Labour's Lost, Lord Biron compares the schoolmaster Holofernes to 'a death's head in a ring' (Act 2, scene 2). A less known play by Marston, The Dutch Courtesan, 1605, alludes to the fate of the courtesans thus: "As for their death, how can it be bad, since their wickedness is always before their eyes, and a death's head most commonly seen on their middle finger'.

Enamelled gold ring, the hexagonal bezel enamelled with a skull and the inscription + NOSSE TE. YPSUM (Know yourself) and 'Dye to lyve' with volutes and foliated shoulders enamelled in black, England, about 1550-1600. 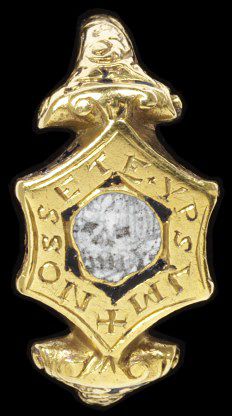