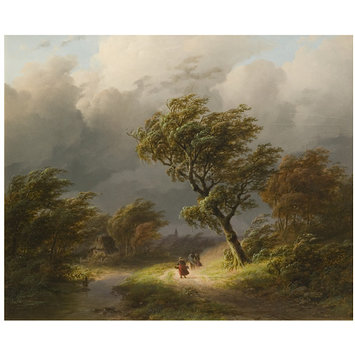 Trees in a storm

Johann Bernard Klombeck (1815-1893) was born in Kleve, Germany, not far from the Dutch boarder near Nijmegen. The portrait and genre scenes painter Matthais Tinthoff (1794-1881) was his uncle and gave him his first training. In 1834, the great Dutch landscape painter Barend Cornelis Koekkoek (1803-1862) founded an Academy in Kleve, of which Klombeck and his uncle were the first members. From 1843 to 1856, Klombeck often exhibited at the Salons in Amsterdam, Rotterdam, The Hague, Dresden and Berlin.

This painting is a typical example of Klombeck's Romantic landscape, a genre in which he specialised under the influence of his master B.C. Koekkoek. The ominous tempest in the countryside at the end of the summer and the vastness of Nature compare with the fragility of human conditions are essential characteristics of Klombeck who was particularly interested by the pictorial rendering of the seasons.

Landscape with trees being buffeted by strong winds under a stormy sky with figures fighting against the wind.

'Chauncy Hare Townshend (1798-1868) was born into a wealthy family, only son of Henry Hare Townsend of Busbridge Hall, Godalming, Surrey. Educated at Eton and Trinity Hall, Cambridge (BA 1821). Succeeded to the family estates 1827, when he added 'h' to the Townsend name. He had taken holy orders, but while he always referred to himself as 'Rev.' on the title pages of his books, he never practised his vocation... . Very much a dilettante in the eighteenth-century sense, he moved in the highest social and literary circles; a great friend of Charles Dickens (he was the dedicatee of Great Expectations) with whom he shared a fascination of mesmerism... Bulwer Lytton described his life's 'Beau-deal of happiness' as 'elegant rest, travel, lots of money - and he is always ill and melancholy'. Of the many watercolours and British and continental oil paintings he bequeathed to the V&A, the majority are landscapes. He is the first identifiable British collector of early photographs apart from the Prince Consort, particularly landscape photography, and also collected gems and geological specimens.

Historical significance: This characteristic work shows a windy countryside with backturned figures walking against the wind. The trees are buffeted by a strong wind, blowing from the left and the grey sky is pierced by a sunbeam, illuminating the path on which the figures walk. Klombeck was particularly interested in depicting the seasons and this picture may suggest summer's end. Romantic motifs, such as prominent trees and ruins, stormy weather and figures fighting against the elements, played a major role in Klombeck's oeuvre. Here the path and the stream beside it, winding to then disappear into the horizon, and diagonals elements, such as the bending trees, are reminiscent of the work of B.C. Koekkoek.

The word 'Romanticism', derived from the medieval term 'romance', coined by German poets and critics, August Wilhelm and Friedrich Schlegel, to label a wider cultural movement spanning the late 18th and mid 19th centuries. Inititially a literary and philosophical movement, by 1800 only it involved the other arts. Romantic artists showed a fascination for nature, which they interpreted as a mirror of the mind. They also investigated human nature and personality, folk culture, national and ethnic origins, the medieval, exotic, remote, mysterious and occult.

Klombeck was born in Cleve, and was a pupil of B. C. Koekkoek. He painted mainly landscapes, which he exhibited at the Academies in Dresden (1851) and Berlin (1856 and '66). He is generally considered as a leading member of the Romantic School and was the foremost representative of the Cleve Academy following the death of his master in 1862. 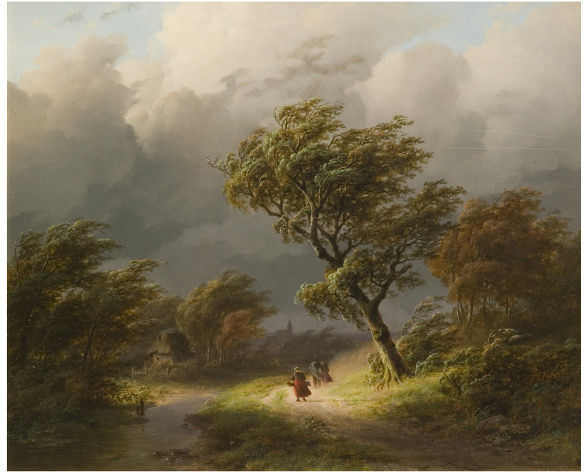