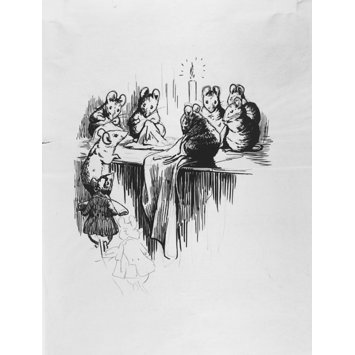 Beatrix Potter (1866-1943) is one of the world's best-loved children's authors and illustrators. She wrote the majority of the twenty-three Original Peter Rabbit Books between 1901 and 1913. The Tale of Peter Rabbit (Frederick Warne, 1902) is her most famous and best-loved tale.

A published author with an astute business sense, Potter began designing merchandise to accompany The Tale of Peter Rabbit within a year of its publication. In December 1903 she began making a Peter Rabbit doll for the niece of her publisher, Norman Warne: 'the expression is going to be lovely; especially the whiskers - (pulled out of a brush!)'. She patented the doll on 28 December 1903 and went on to design a Peter Rabbit board game, painting books, handkerchiefs, stationery, wallpaper, a nursery frieze, figurines, slippers, calendars, tea-sets, jigsaw puzzles, and so on. Never short of ideas, Potter pursued an interest in merchandise long after she had ceased to write and illustrate children's books. She maintained a careful control over all product designs, insisting in particular that any reproduction of her characters should be faithful to her original drawings and to the true nature and likeness of animals.

Beatrix based her first painting book, Peter Rabbit's Painting Book, on one that she had made some years earlier as a present for Louie Warne, the daughter of Harold Warne. In the published book, Peter Rabbit is joined by other characters, including Jemima Puddle-duck, Mrs. Tiggy-winkle, Squirrel Nutkin and Tom Kitten. Beatrix warns children, ‘Don’t put the Brush in your mouth. If you do, you will be ill, like Peter’.

This drawing of mice sewing was produced for a painting book but never published. A watercolour version of the illustration appears in The Tailor of Gloucester on page 42 of the 2002 edition.

Six mice sit on a table sewing by candlelight whilst three other mice climb up towards the table top (one unfinished).

Pen and ink and pencil on paper

Drawing of mice sewing by candlelight by Beatrix Potter, ca. 1911-1925; unpublished design from The Tailor of Gloucester (1903) for a painting book; Linder Bequest cat. no. LB.1908. 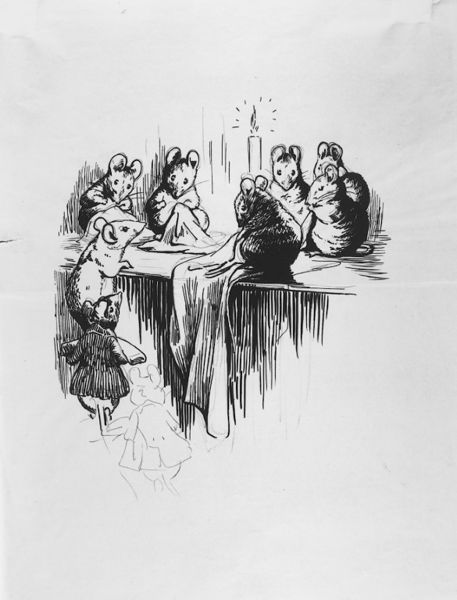