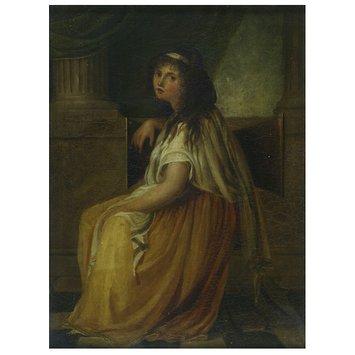 The original and early attribution of the present portrait to A. Kauffmann has been recently discussed by some scholars. The identification of the sitter as Lady Hamilton, based on an inscription in the back, is not either fully satisfying. This painting is however a fine example of neo-classical portraiture, based on the so-called "Vandyke manner" essential to British portrait painting in the age of Joshua Reynolds and Thomas Gainsborough.

Full length portrait of a woman in classical dress, seated sideways on a Neoclassical chair between two columns.

Historical significance: The attribution of this painting to Angelica Kauffmann has been recently discussed. Although Dr Williamson, a former curator of the V&A, was probably responsible for the original attribution of the picture to Angelica Kauffmann, the painting does not seem to closely correspond to her style. Dr Francoise Forster-Hahn, former curator of the Stanford University Museum of Art, disagreed in fact on this attribution (written communication, Sep. 1973). The Stanford University Museum of Art also owns a portrait said to be of Lady Hamilton as the Comic Muse, which may most likely be by another artist still unidentified. By comparison with another portrait by A. Kauffmann of Emma Hart, Lady Hamilton as Thalia, 1791, private collection and subsequently engraved by Raphael Morgen in the same year (British Museum, London - 1870,0514.1335 and The National Portrait Gallery, London -NPG D19120), the sitter appears here quite different. Although the painting is dated 1796, the sitter appears younger than in the portrait painted by Kauffmann five years earlier. 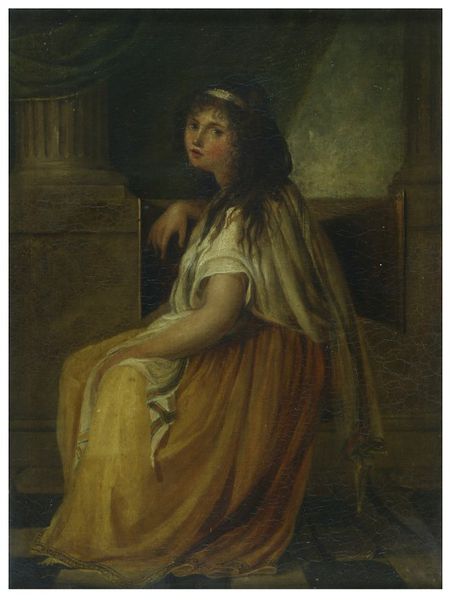