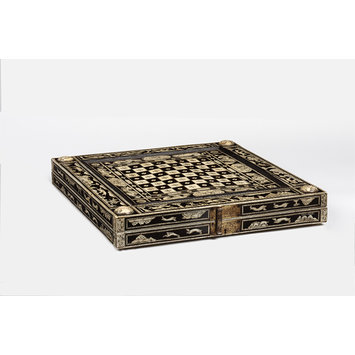 This gamesbox consists of two double-sided boards which provide playing surfaces for backgammon, chess, draughts, and merels, a game of alignment. When not in use, games-pieces could have been kept inside the box. During the Renaissance gamesboxes ornamented with luxury materials were common among the very rich. Though cheaper versions were probably more widespread, they have rarely survived. The lavishly engraved decoration copies various series of contemporary prints, and includes sea monsters, hunting scenes, dancing couples, birds, monkeys, lions and parrots.

During the 16th century the cabinet-makers of Augsburg in southern Germany, where this box was probably made, began to specialise in ebony veneers (obtained from Venice or Amsterdam) and engraved bone and ivory. They thrived because of the city's efficient production in luxury goods, its far-reaching trade links, and well-organised merchants, and its openness to both Protestant and Roman-Catholic clients.

Gamesbox, consisting of two double-sided hinged games-boards, the outside for chess or draughts (also known as dames, and in Germany damespiel) on one side, larger merels (also known as 11 or 12 men's morris; in Germany Mühle or mühle(n)spiel) on the other; the two interior boards for backgammon. The key is missing.

The boards of an unidentified carcase-wood, fully veneered with a tropical hardwood (probably ebony, c.1.4mm thick) and bone (between 1.6 and 2.2mm thick where visible), with black paste worked into the engraved surface; 2 gilt-metal butt hinges each on 4 hand-cut slotted screws (apparently original), with hasp (folding over a sprung pin) and hasp-plate with keyhole, all etched with foliate ornament and gilded.

The exterior of each board with edges decorated with a narrow panels of hunting subjects; the exterior face with long rectangular (47cm deep) panels of men and hounds hunting hares, boars and bears, with rounded corner bosses (33-34mm diameter) with medallion heads (and a central plug), all surrounded by running guilloche ornament; with a central field enclosed by an applied hardwood cyma recta moulding with mitred corners. Note that the raised corner bosses served to protect the flat ornamented surfaces of the boards - and are somewhat worn.

One board with merels on the outside and backgammon on the inside. The central field of the exterior face with a continuous outer border, 2 mid-sections each divided into four, and a central square. The outer border consisting of four corner discs with perching parrots, 8 sea monsters, and centring each side an elliptical panel with a man in antique breastplate supporting his bifurcating fish tail. The outer mid-section of 4 L-shaped sections with a narrow beaded-edge border, with 17 playful lions on rocks, and at the corners 4 wise monkeys, one with a stick, one playing a viol. The inner mid-section of 4 L-shaped sections with a narrow beaded-edge border, with 10 birds perched on branches which may be read as eagles disputing with smaller birds. The central square with narrow beaded-edge border contains an owl on a mound. The outermost border with romayne heads.

One board with a chess board on the outside and backgammon on the inside. The central field of the exterior face with a continuous outer wide border, a narrow inner border and a chess grid. The outer border consisting of four corner discs with perching birds, 8 sea monsters, and at the centre of each side an elliptical panel with a man in antique breastplate supporting his bifurcating fish tail. The inner border of a running cord with large, corner rosettes and 4 small rosettes (18mm diameter) alternating with 4 units of guilloche on each side. The central field with a chess grid of 64 squares (26mm square) with round engraved flowers on bone, and bone quatrefoils inset in dark hardwood.

The interior face of both hinged boards forming a backgammon board, with a flat section (56mm wide) containing on its 3 outside edges battle scenes between mounted soldiers with swords, pistols, spears, axes, bows and arrows, shields, horns and two flags, one with a chequer design, the other with arrows and crescent moons, some soldiers with distinctive hats and scimitars representing Turks; this flat section is enclosed by an inner border of running zigzag and outer borders of running guilloche on the inner edge and a leaf pattern on the outer. On the 4th hinged edge of each board are two cartouches, each containing a dancing couple in 16th century costume, and a central heart-shaped cartouche with a mask, and a vase of fruit and leaves above, and a bunch of fruit and leaves below. The outermost border with romayne heads.

The central well (14mm deep) of each interior face with plain hardwood walls, contains alternating backgammon spears, either with arabesques or plain with a cord edging, separated by rosettes of varying designs and pyramidal groups of grotesque figures; with a central rectangular panel, with double inner/outer borders of ribbon and dogtooth banding, (reversed on the other board), containing 2 sea monsters flanking 2 central sphinxes that face each other, and at each end of the panel a bearded, profile mask set on strapwork.

National History Museum (Mammals department) examined the board and identified the white material as large mammal bone (probably cow). The rounded bosses have been cut from femur tips (where it meets the hip joint socket) - an interesting instance of adapting material to function, in this instance for preservation of vulnerable surfaces.

The tropical hardwood veneer and mouldings are probably ebony. Patches of discolouration on the white bone areas may have appeared over time due to intrinsic differences in the bone, rather than be the result of deliberate cleaning treatments for example.

Veneered with ebony, and with inlay of engraved bone

Bought for £115-10-0 from F.E.Whelan Esq. 6 Bloomsbury Street, W.6 It was purchased at the sale of the Forman Collection held at the Rooms of Messrs Sotheby, Wilkinson and Hodge, nos. 9-13 Wellington Street, Strand on the 19th June, 1899 and the three following days, lot 514. [No further information found on the surviving RF MA/1/R/475 (Rollin and Feuardent).]

The sale catalogue introduction by Cecil H. Smith notes that William Henry Forman built up his collection "in the middle years of the" 19th century, "mainly from purchases at London sales", and that it was housed at his home at Pippbrook House, near Dorking. After his death in about 1889, it passed to his sister-in-law Mrs Burt, and thence to his nephew Major A.H.Browne of Callaly Castle, Northumberland. The collection was notable for Egyptian, Greek and Roman antiquities, but also contained (on the fourth day) silver, carvings, arms and metalwork, enamels, majolica, cuir bouilli, snuff boxes, mosaics and carvings (in which category came lot 514).

According to Furniture, Textile and Fashion Dept. findings lists, the box was displayed in Room 3 (c.?) and in gallery 48 (the woodwork study collection) from at least 1974 to1982.

Dieter Alfter, The History of the Augsburg Cabinet, Augsburg 1986 (English summary, FWK dept library FW11 C 16A):
Suggests that ebony veneered furniture inspired by goldsmith's work began to be produced from the mid 16th century, and that early examples derive from small chests, reliquaries and house altars, with orders from high ranking clients such as Emperor Maximilian II who ordered a little chest veneered with ebony from Augsburg cabinet-maker Hans Krieger in 1570. Bills prove that during the following years his workshop produced several ebony works for the Munich court as well. From about 1600 the techniques were used on cabinets, which became an Augsburg speciality because of the city's efficient production in luxury goods, its far-reaching trade links, the well-organised mercantile structures of traders such as Hans Fugger and Zacharias Geizkofler and its openness to both Protestant and Roman-Catholic clients. Ebony was obtained from Venice, and later Amsterdam.
Alfter claims (in referring to the production of cabinets) that ivory inlaid objects were executed entirely at one workshop and that Hainhofer suggests that many Augsburg cabinet-makers used ivory (n.331, referring to Oscar Doering, Des Augsburger Patriciers Philipp Hainhofer Beziehungen zum Herzog Philipp II. von Pommern-Stettin (Quellenschriften für Kunstgeschichte und Kunsttechnik des Mittelalters und der Neuzeit, N.F. VI), Vienna 1894), p.116). Some early gamesboards with engraved ivory have been attributed to Paul Göttich (Museo Poldi Pezzoli, inv.1128, 121 x 83cm). Such objects were produced in bulk.

In the late fifteenth and early sixteenth centuries Augsburg grew culturally and economically under the reign of the Holy Roman Emperor Maximilian I (r. 1493-1515), whose hereditary Hapsburg lands in the Tyrol were rich in silver and copper. Not only did these metals enrich Augsburg but mining them handsomely profited the Fugger and Welser families of Augsburg merchants. The city was home to the painters Hans Holbein the Elder, Hans Holbein the Younger, Hans Burgkmair the Elder, and Christoph Amberger. It was also a destination for Albrecht Durer and Lucas Cranach the Elder as visitors. Humanists such as Conrad Peutinger (1465-1547) as well as members of the Fugger family were eager and intelligent patrons of painters like these and of the city's renowned goldsmiths, medal makers, and, ultimately, cabinetmakers.

For the history of the board games for which these boards were suitable see, MURRAY, H.J.R.: A History of Board-Games other than Chess, (Reprint, New York, 1978), pp.72ff (draughts), pp.43ff the larger merels; and David Parlett, The Oxford History of Board Games (Oxford 1999).

Chess had a political dimension in Renaissance culture. The game was regarded as an allegory of civil life, with the chess pieces - kings, queens, knights, bishops and pawns - standing for the several orders of society. (P. Fortini-Brown, Private Lives in Renaissance Venice (2004) p.130). 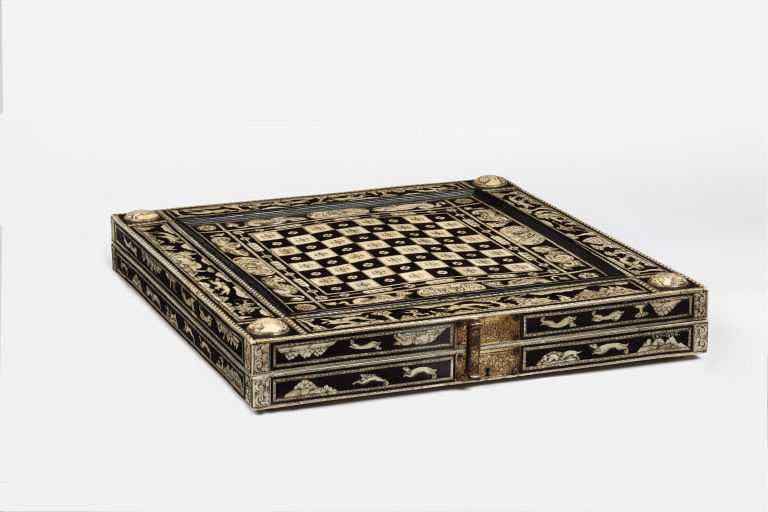