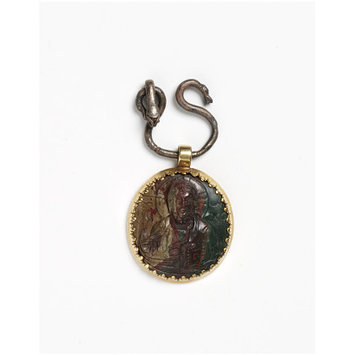 Cameos were produced throughout the course of Byzantine history and a significant number survive. Probably used as amulets or decorations for book covers they were used to appeal, usually to Christ or the Virgin for assistance and protection. Here Christ is depicted as an austere figure in the tradition pose of The Pantokrator which means "all sovereign".

Bloodstone cameo depicting Christ Pantocrator. Christ shown frontally, blessing with His right hand and holding a book in His left. The cover of the book has a roundel in the centre and a border with incised dots. He has a crossed nimbus; in the lateral arms are three circular incisions. To either side of his head is the inscription IC and XC.

Bloodstone set in a later gold frame with a silver hasp

'IC [and] XC'
The monogram of Christ

Purchased from Rosewood Investments Ltd, with the assistance of Mr Michael van Rijn, through the associates of the V&A, in 1978.

Cameos were produced throughout the course of Byzantine history and a significant number survive. They are carved from gem materials such as sardonyx but also jasper, of which this bloodstone example is a variety. These gem stones are all so hard that they can only be worked with rotating instruments and abrasive grit. Semi-precious materials were used as they were generally considered to reinforce the power of the images and inscriptions which they carried. Michael Psellus (1018-after 1081) records this attitude. The use of bloodstone in the case of A.4-1982 may be significant. The natural red colour of the veins in the stone would provide a visual reference to Christ's self sacrifice and thus act as an integral part of the function and the message of the object.
These objects are almost always displayed as jewels and may have been worn as pendants (Enkolpia) which hung on the chest and bore an image close to the heart, or as Williamson suggests, used to decorate book covers where they would help glorify the word of God. Early Byzantine gems continued the Roman tradition of apotropaism and were used as medical or protective amulets, a use which gradually developed towards the Christian concept of an appeal, usually to Christ or the Virgin for assistance and protection.

Cameos and related portable sculptures were instrumental in carrying Byzantine style to the West; in Venice, for example, Byzantine gems were copied in glass paste, as early as the twelfth century and many of the most popular Byzantine objects were transmitted on to objects and larger monuments made in Italy and elsewhere in the West. There were many different ways of showing Christ and the Virgin in the Byzantine East, but these different types usually adhered to conventions laid down in their original model: Thus the Virgin is most often shown as a Theotokos Hodegetria, Virgin Orans or the Virgin Blachernitissa so-called because the original image of this type was housed in the Blachernai monastery in Constantinople.

The concepts that separate the types of Christ are theological, having to do with the various manifestations of Christ in relation to God the father. The type depicted on the present cameo can be identified as the Pantokrator or "all sovereign" type. This is the most common type: Christ is represented frontally as severe full bearded figure, clad in a tunic and himation, blessing with his right hand and holding the gospels in his left. His hair is parted in the middle. His halo is inscribed with a cross. The features can undergo subtle variations to emphasise Christ's ascetic, merciful or judgemental aspects. In the present example he appears quite austere.

The mount is of a later date than the cameo.

Purchased with the assistance of Mr Michael van Rijn, through the associates of the V&A. [2005]

Istanbul then Constantinople capital of the Byzantine Empire. The mount is of a later date than the cameo. 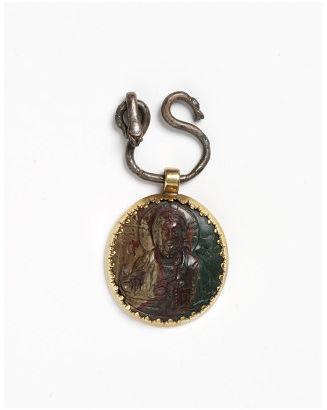