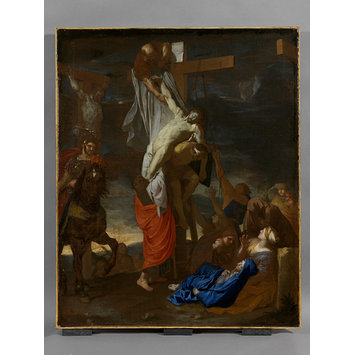 The Descent from the Cross

Charles Le Brun (1619-1690) was born in Paris and soon achieved a great success becoming the court painter of Louis XIV. He trained with François Perrier (1594-1649) and then collaborated with Simon Vouet (1590-1649) during the mid 1630s. He made a decisive trip for his artistic development to Italy with Nicolas Poussin (1594-1665) in 1642 and returned to Paris only three years later. He then became quickly very successful and produced many history and religious paintings as well as designs for the royal palaces.

This painting is a fine example of Charles Le Brun’s Baroque style who dominated 17th-century French painting. It shows the Descent from the Cross of Christ’s body by Nicodemus and St John the Evangelist while a group of mourning women gathered around the feinted Virgin Mary. This austere composition is pervaded with dramatic intensity enhanced by touches of vivid colours against the dark background. This work, of which several versions are known, was particularly popular and inspired the next generation of artists.

Lowering of Jesus from the cross by four men, a Roman soldier on the left hand-side and the Virgin Mary with Mary Magdalen on the right hand-side with other three mourning figures.

This painting was originally acquired as a work by the French painter Sébastien Bourdon (1616-1671) however comparison with an engraving by François de Poilly inscribed with 'Le Brun pinxit' restored Le Brun's authorship (Montagu, 1968).

Charles Le Brun was the most important and influential designer in Louis XIV's court and he was commissioned the decoration of various royal palaces including Fontainebleau, the Louvre and Versailles. He was in particular a prolific painter of religious scenes and as such, he illustrated at least four 'Depositions'.

This painting is a typical example of Le Brun's Baroque style in which a great emotional tension goes together with an intense austerity. 1091-1863 shows the influence of the Italian school on the 17th-century French art, especially Annibale Carracci (1560-1609) for the austerity and the colour scheme as well as Savoldo whose veiled Mary Magdalene in the National Gallery, London, may have inspired the veiled mourning figure above the Virgin Mary.

Moreover J. Thuillier (1963) pointed out the similarity of the group of the Virgin to that in Annibale Carracci's small Crucifixion, formerly in the Giustiniani collection, Rome, while the compositional idea of the shroud underlining the pale glow of Christ's body, continued in St John's drapery, is reminiscent of Rubens' Deposition in the Antwerp cathedral (1612-14). The subdued colours enlivened by bright areas of red and blue also recall the Flemish palette.

A version in The National Gallery, Prague (Inv. 056), was tentatively dated around 1647-48, just after his return from Italy, while a second version currently catalogued 'school of Le Brun' is in the Museum at St-Germain-en-Laye near Paris (Inv. 872-1-2).

A third version from the collection of the cardinal Fesch was sold in 1845 and has since disappeared.

The present version was dated by Montagu from around 1642-45 on the ground that it shows the important influence of Italian models and may therefore have been executed while Le Brun was still in Rome.

Acquired as by Sebastian Bourdon, this painting was recognised by Jennifer Montagu as a version of Le Brun's Deposition . 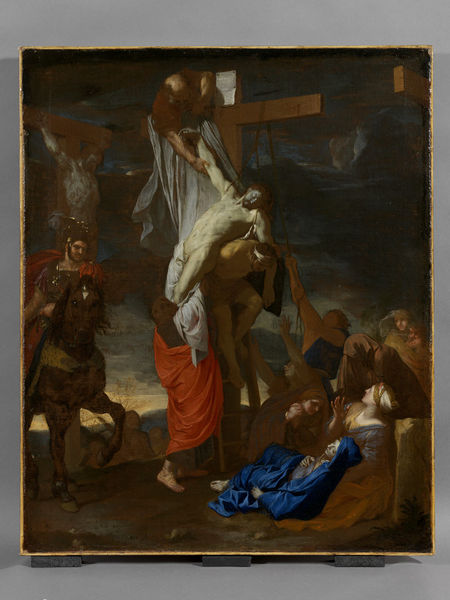