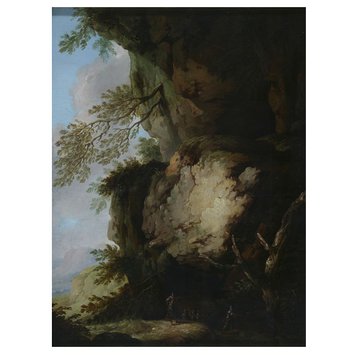 Salvator Rosa (1615-1673) was born near Naples where he studied with his brother-in-law Francesco Fracanzano (1612-1656) and then possibly with Jusepe de Ribera (1591-1652). He probably completed his training in the studio of the battle painter Aniello Falcone (1607-1656). In 1635 Rosa left for Rome where he became part of a group of poets and writers and founded a company of actors in which he participated. A scandal involving the sculptor Gianlorenzo Bernini (1598-1680) compelled Rosa to leave Rome for Florence in 1640. He returned to Rome nine years later and remained there for the rest of his life.

This painting is an imitation of the art of Salvator Rosa who specialised in expressive landscapes in which an imposing nature dominates small human figures. The present work shows a steep rock from which grow arid branches with at the bottom the entrance of a cave. Small figures of soldiers are standing in front of the cave and vanish into the darkness. On the left hand side, a serene blue sky provides the composition with peaceful brightness. This picture is a good example of late 17th-18th century landscape paintings, a genre that was highly praised and sought-after at that time.

At the bottom of a steep rock on the right, a dark cave with soldiers standing before it, on the left, a bright blue sky with mountains receding into the distance.

Historical significance: This painting was originally attributed to Salvator Rosa but appears to be an imitation of a recurrent compositional scheme in Rosa's oeuvre.
It shows a steep rock that occupies three quarters of the pictures and, at the bottom, very small figures of soldiers vanishing into the darkness of a cave. On the left, a bright blue sky counterbalances the massiveness of the rock. The disproportion between the figures, which look overwhelmed by an imposing nature, is a characteristic feature of Rosa's art (see among many others Landscape with an eremite, Musée Condé, Chantilly, Rocky landscape with soldiers, Violante, Rome and its pendant, whereabouts unknown).
Rosa developed this new style in which he increased the expressiveness of his landscapes in the 1660s. Here the artist took up the wild and mountainous beauty of Rosa's most popular compositions but omitted to introduce dramatic effects of light in the sky, which appears therefore bright and serene contrarily to Rosa's style (see The Finding of Moses, Detroit Institute of Art). The small figures of warriors which recur in Rosa's art are indebted to earlier examples by Jacques Callot (1592-1635) and Filippo Napoletano (ca.1587- ca.1629) and contrast with the contemporary pastoral scenes of Claude Lorrain (1604-1682), which most commonly display elegant classical figures.
Although the present painting imitates Rosa's manner, it does not reproduce well enough his rich and expressive brushwork, dark tones, uneasy colours and dramatic chiaroscuro, which gives his pictures this well-known sombre and disturbing power anticipating thus the Romantic period.

Although France and England became the new centres of landscape art in the 18th century, the Italian and Dutch traditions retained their authority. However the Arcadian vision of Italy increasingly tended towards a more precise observation of nature. Some of the most exciting developments took place in Venice, in the soft scenes of Francesco Zuccarelli (1702-1788), inspired by Claude Lorrain (1604-1682), and the fresh, spontaneous landscapes of Marco Ricci (1676-1730). Wealthy patrons, often accompanied by artists, on The Grand Tour, created a market for veduta and capriccio paintings, respectively topographical and fantasist landscape paintings. Landscape conventions were further enriched by foreign artists working in Italy, responding both to the beauty of Italian light and scenery celebrated by the Latin poets and vividly captured in the most popular landscapes of Claude Lorrain, Nicolas Poussin (1594-1665)and Gaspard Dughet (1615-1675). 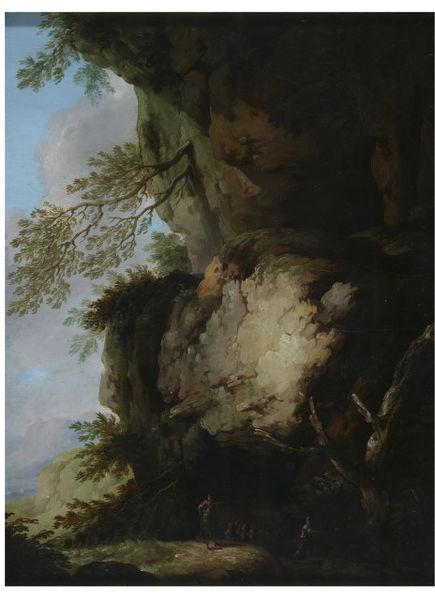