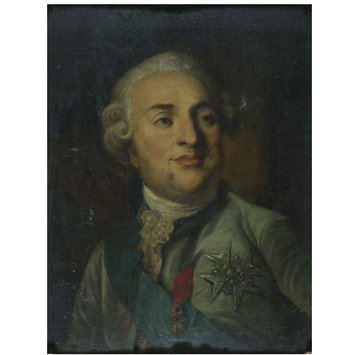 Joseph Siffred Duplessis (1725-1802) was born in Carpentras, Southern France, and trained at first with his father, an amateur painter, and then with Joseph-Gabriel Imbert (1666-1749), a pupil of Charles Le Brun. In 1744 he went to Rome and worked with Pierre Subleyras (1699-1749). He specialised in portrait paintings and also painted landscapes. He enjoyed a great success and succeeded Jean-Siméon Chardin (1699-1779) as councillor at the Académie in 1780.

This painting depicts King Louis XVI of France and is a copy after an original executed around 1775. This portrait is a good example of royal representation during the absolute monarchy in France. Louis XVI wears a fashionable silk doublet and the two most prestigious decorations: the blue ribbon and star of the Order of The Saint Esprit and the red ribbon and badge of the Order of the Toison d'Or. This copy may date from the late 18th to the early 19th century.

Three-quarter profile portrait of a middle aged man wearing a white wig, a pale-blue doublet with a white neck-tie, ribbons and medals.

Historical significance: This painting portrays Louis XVI, King of France, who was beheaded in 1793 after the French Revolution. This portrait is a reduced replica of a painting executed by Joseph Siffred Duplessis around 1775, originally oval in format and showing the entire bust length. Two versions of this portrait by Duplessis are housed in the Musée National des châteaux de Versailles et du Trianon (Inv. MV 8464 and MV 3966), another in the Musée de Condé, Chantilly (PE 388) and other two in the Rijksmuseum, Amsterdam (SK-A-3278) and the Musée de l'Hôtel Sandelin, Saint-Omer (0261 CM). One of these portraits may be the one exhibited at the Salon in 1775 (no. 128), considered as the original. Duplessis and his workshop realised after this original portrait many replicas (about fifty) to satisfy the demand for royal representation.
Louis XVI is here depicted with the blue ribbon and star of the Order of The Saint Esprit and the red ribbon and badge of the Order of the Toison d'Or, the two most prestigious decorations but the Regalia, crown and main de justice as well as the sceptre are missing. This is because as an absolute monarch from divine right, Louis XVI did not need to display tangible signs of his power.
The overall clumsiness of the present painting suggests it was made by another hand than Duplessis and his assistants, who were renowned for the good likeness and their masterly technique. The partial copy as well as the square format indicates that the painting may have been trimmed at the bottom and the right hand-side. 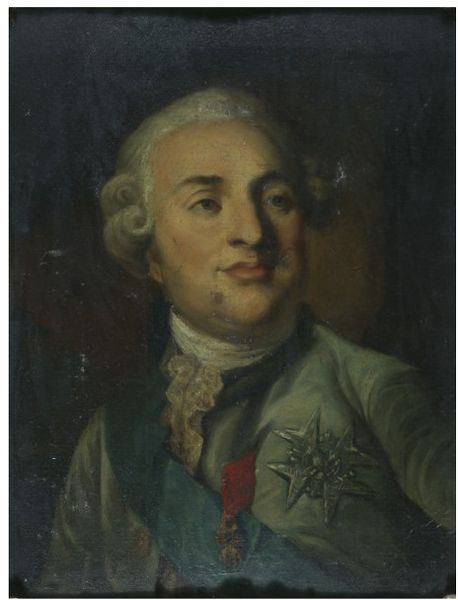