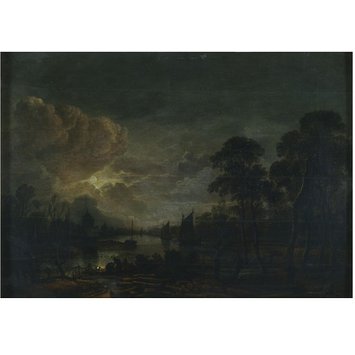 Aert van der Neer (1603/04-1677) spent his youth in Arkel near Gorinchem (Gorkum), a town on the river Waal, east of Dordrecht. He moved to Amsterdam in about 1632 and remained there for the rest of his life. He was best known for moonlight landscapes and winter scenes. The chronology of van der Neer's oeuvre is far from easy to determine however his earliest work seems to date from 1642 and the latest from 1665.

This painting which attribution is uncertain could well be an authentic work by Aert van der Neer who had a very large output and was much copied during and after his lifetime. It is however featured in the catalogue raisonné (Wolfgang Schulz, 2002) of the artist as a probable 17th-century imitation. Despite the 19th century retouchings, the overall picture looks like a 17th century work and the naturalistic elements are all very well executed and neat: the foliage in the trees, the vegetation at ground level but also the nets and the figures are very accurate and readable. The entire picture conveys a sense of lightness and freshness that is typical of van der Neer's production. The compositional idea is also recurrent in many other versions of the same subject. Despite its darkness most likely due to a dirty varnish and the actual poor condition of the painting, the play of light and the contrast between light and darkness are typical of van der Neer's mastery in natural effects through a subtle use of an earthy palette that plays with greyish blue and reddish brown tones.

An extensive river landscape with figures repairing a net in the foreground and sailing boats with a distant city in the background.

Historical significance: The attribution of this painting is uncertain. Originally acquired as 'attributed to van der Neer' (1893 Catalogue, p. 183), it was subsequently catalogued (1973 Catalogue, p.203) as 'a 17th century painting in the style of van der Neer, considerably repainted in the 19th century', and it is listed as probably a 17th-century imitation in the catalogue raisonné of the artist (Wolfgang Schulz, 2002).

Despite 19th century retouchings, its naturalistic elements including the foliage of the trees, the vegetation, nets and figures, are neat and well executed. The scene conveys a sense of lightness and freshness typical of van der Neer. The composition reappears in many other versions of this subject. Despite the overall darkness, probably due to degraded varnish and generally poor condition of the painting, its contrast between the play of light and areas of shade is typical of van der Neer, whose earthy palette typically plays with greyish blue and reddish brown tones. 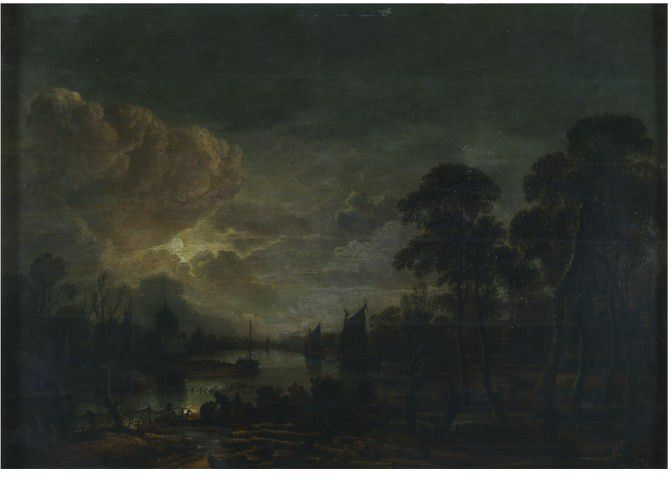