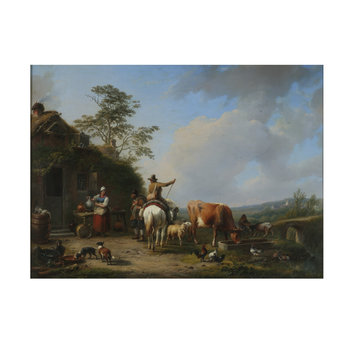 This painting is a good example of Verboeckhoven's classical landscapes, a category in which he specialised soon under the influence of his master Balthasar-Paul Ommeganck. The present painting, showing a cottage on the left hand-side with a woman holding a jug, a man astride and another standing beside him with cattle and other farm animals around, is strongly reminiscent of the 17th-century imagery, which is consider the golden age of landscape and genre painting in the Netherlands.

A cottage on the left hand-side with a woman holding a jug, a man astride and another standing beside him are conversing with her. A cow is drinking from a trough while many other farm animals are grazing nearby.

Historical significance: This painting is a good example of Eugène Joseph Verboeckhoven's landscape paintings, a category in which he specialised under the influence of his master, the classical landscape painter Balthasar-Paul Ommeganck. The present landscape showing a cottage and, in front it, a woman in typical Dutch outfit with a white headgear and apron, travelling peasants and cattle relates to the 17th-century genre painting, i.e. pictures that usually depict scenes of everyday life set in domestic interiors or in the countryside, including battle scenes and merry company.
As a matter of fact, this composition is quite close to a Nicolaes Berchem's painting engraved by Johannes Visscher: Times of Day: Aurora (Holstein, 1. II) in which one can see a cottage on the left, with peasants, cattle and a donkey. This trend may have been also encouraged by the little evolution of the life in the countryside since the 17th century with almost identical ways of dressing and living.
Verboeckhoven's palette also imitates the bright and vivid colouring of the great 17th century landscapists, especially Nicolaes Berchem and Paulus Potter who were able to convey a sense of wide open space bathed in the sunlight. He consequently took over the idea of a low horizon line that enables him to depict a wide sky in which the clouds reflect the effects of light in open air.
Art from the Golden Age was extremely appealing to landscape painters of the 19th century also because it represented a national glory and showed motifs such as cattle, modest life in the countryside, great perspective plans that were part of the national pride renewed in those years of political changes: the kingdom of the Netherlands unifying the northern and the southern Netherlands was proclaimed in 1815, and even after the independence of modern Belgium, the links remained strong.
Verboeckhoven's work shows little evolution, but his paintings were very popular and rather expensive: he received several prestigious commissions and obtained titles and decorations throughout Europe. 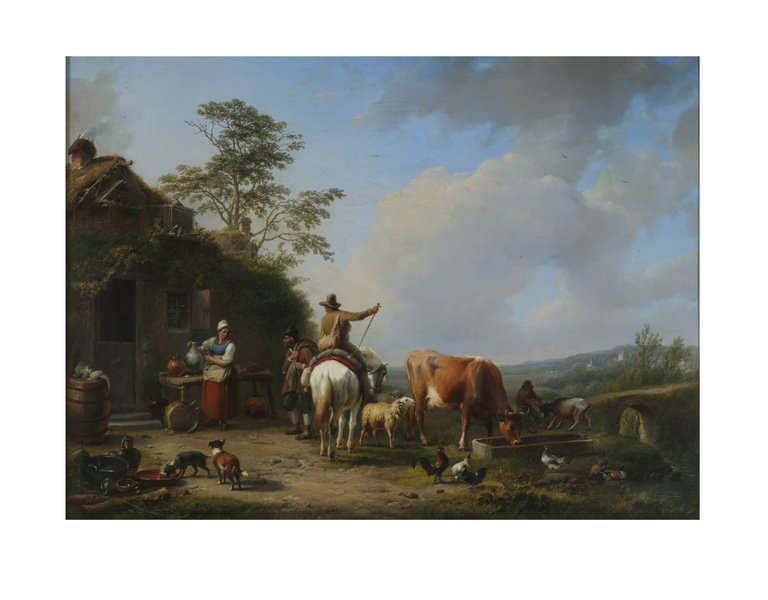