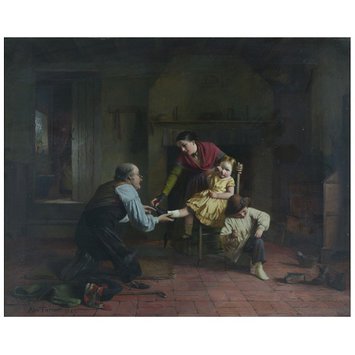 Historical significance: Two paintings by Alexander Farmer (1817-69), 'An Anxious Hour' and 'No-one knows where the shoe pinches but he who wears it', were bequeathed to the museum in 1905 by Miss Emily Farmer, the younger sister of the artist.

Farmer was a genre and still-life painter who exhibited at the Royal Academy between 1855 and 1867. 'No One Knows Where the Shoe Pinches but He Who Wears It' was shown there in 1867. Farmer lived at Portchester House, Portchester, Hampshire, with his mother and two sisters.

A mistake in Graves' published dictionaries of Royal Academy and British Institution exhibitors, where Alexander Farmer is referred to as 'Mrs A. Farmer', has led to ongoing confusion over the artist's sex. The problem was compounded when two paintings by Farmer, entitled 'Lost' and 'Found' (both 1861), included in an exhibition entitled The Victorian Scene at M. Newman's Gallery, Duke Street, London in 1962, were incorrectly catalogued as by Alexandra Farmer.

However, in each of the relevant RA exhibition catalogues between 1855 to 1867, during the artist's working lifetime, the reference is to 'A. Farmer', not 'Mrs. A. Farmer'. It is likely that Mrs Alexander Farmer never existed, and that confusion between Alexander and his sister Emily, a professional watercolourist and miniature painter, resulted in the creation of a fictional 'Mrs Farmer' when the two were conflated.

Oil Painting, 'No One Knows Where the Shoe Pinches but Him Who Wears It', Alexander Farmer, 1867 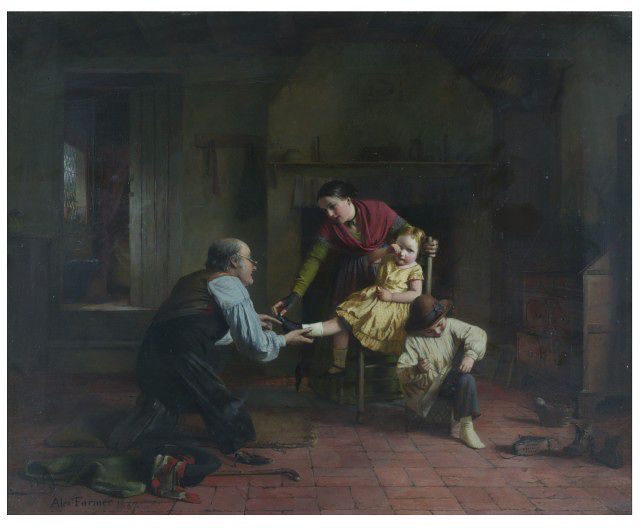