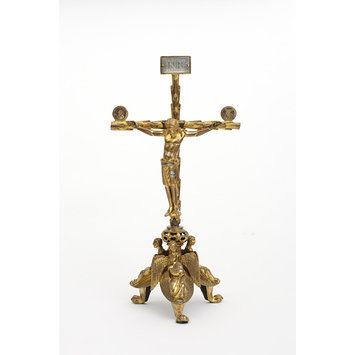 The body of Christ contains a sliding panel to cover a relic, which an inscription identifies as a fragment of the True Cross. Around the foot are figures, also identified by inscriptions, representing the archangels, Gabriel, Michael and Raphael. The reliquary may have served also as an altar cross.
The portrayal of the cross as "Ragged" -i.e. not cleanly finished, retaining knots along the shaft and arms provides a visual reference to the legendary previous existence of the wood of the cross as the tree of life in the Garden of Eden.

A copper-gilt ragged cross surmounted by an oblong plaque engraved on the back KARITAS and on the front a sliver plate (added in the 17th century) inscribed INRI. Above the right arm of the cross is a circular plaque engraved on the front with a bust of St John on a ground of blue champlevé enamel and on the back SPES. The corresponding position on the right arm is taken by a bust of the Virgin against green ground and on the back FIDES. The Christ whose unpierced feet rest on a sloping block, wears a skirted loin-cloth with applied decoration in nielloed silver. At the back is a cavity with a sliding door inscribed LIG NV DNI. The foot of the cross fits into the knop decorated with openwork palmettes supported on a pointed trefoil base on three lion feet. Around the base are seated figures of three archangels each holding a disc inscribed with their name.

Copper-gilt, with niello and champlevé enamel

FIDES
Faith
Inscribed on the reverse of the left arm roundel.

SPES
Hope
Inscribed on the reverse of the right arm roundel.

KARITAS
Charity
Inscribed on the reverse of the oblong plaque at the head of the cross.
A Mosan cross in the Walter's Art Musuem, Baltimore (Mus no.44.98) is similarly inscribed with virtues.

LIG NV DNI
The inscription identifies the relic as a piece of the True Cross.

MICHAEL QVIS VT DS
Held by a figure on the base

RAPHAEL MEDICINA DEI
Held by a figure on the base

GARBRIEL FORTITUDO DI
Held by a figure on the base

Acquired from the Soltikoff Collection in 1862

Originally described as German and attached to the Hildesheim School on the ground of its resemblance to a pair of candlesticks with allegorical figures in the treasury of Hildesheim Cathedral. Count Borchgrave d'Altena strongly maintained that all these pieces must be Mosan for stylistic reasons and that they belong to the period of the Stavelot portable altar (ca.1150). Von Falke ascribes both the cross and the candlesticks to the "master of the Stavelot portable altar", dating them all to the third quarter of the twelfth century and making the important point that the Hildesheim candlesticks only reached their present resting place in the nineteenth century and they have no known historical connection with the town.

The Crucifixion constitutes the single most important event in the legend of the True Cross, a legend popular in the Mosan region. References to the legend occur on several works from the locality, most impressively on the Stavelot Triptych now in the Morgan Library New York. The portrayal of the present cross as "Ragged" -i.e. not cleanly finished, retaining knots along the shaft and arms provides a visual reference to the legendary previous existence of the wood as the tree of life in the Garden of Eden.

The earliest documentary evidence for placing a cross on an altar is canon III of the council of Tours held in 567 : "Ut corpus Domini in Altari, non in armario, sed sub crucis titulo componatur". It was placed on the altar to recall to the mind of the celebrant, and the congregation, that the sacrement offered from the altar was the same as was offered by Christ on the Cross.

RELIQUARY CROSS
Copper gilt, with details inset in champlevé enamel and niello.
MOSAN (valley of the Meuse)
Around 1175

Mosan refers to works produced along the prosperous Belgian stretch of the Meuse River, particularly those regions under the diocese of Liège. This work can currently only be attributed to the general region. 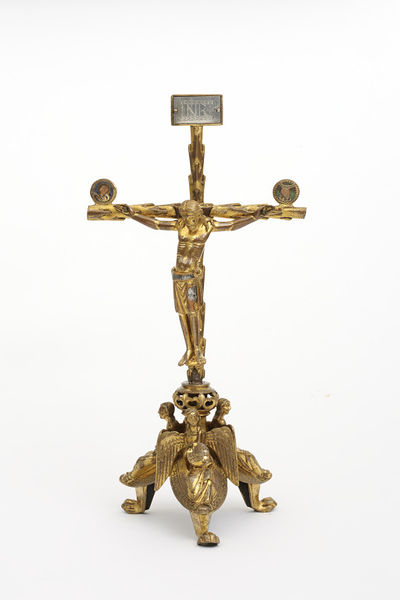