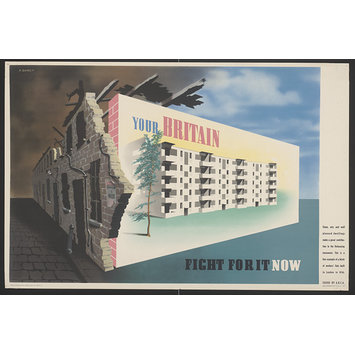 Your Britain : Fight for it Now

This poster, which is one of a series of three depicting progressive public buildings superimposed over bomb sites, could be said to have been motivated by the Beveridge Report. Sir William Beveridge, a well-respected economist and expert on unemployment concerns, was asked by Ernest Bevin, the wartime Minister of Labour, to produce a study into social security schemes, which had until that point developed unsystematically. He published his findings in December 1942, and the report on Social Insurance and Allied Services is widely credited with becoming the framework for the modern British welfare state. In the report, Beveridge identified five ‘giants’or obstacles on the path of reconstruction which society had to address; they were ‘Disease, Idleness, Ignorance, Want, and Squalor’. The welfare state would be the model for civic transformation and aimed to provide inclusive and universal welfare for all of the nation’s citizens.

The scene, which would have been familiar to people living with daily bombing raids, is one of squalor, and neglect. However, the hope of a new beginning is shown superimposed on this dereliction, as new and modern public buildings and homes, are literally built over the old. The poster is addressed to the ordinary man or woman who would have identified with the scene in the poster. The slogan ‘Your Britain – Fight for it Now’ is almost a command, but it is also optimistic as it makes clear the purpose of fighting for one's country, and promises a better future which everyone will help to build.

Poster, 'Your Britain Fight for it Now', colour lithograph depicting a bombed street, with with collapsed roofs, and crumbling brickwork. In the middle of the poster is superimposed an image of a modern block of flats. A tattered poster stuck to the wall of the bombed housing reads, ''CARB. . [illeg] DISINFECTANT KILLS FLEAS BUGS MICE RA[TS]', idicating that the buildings were in a poor neighbourhood, probably a slum.

'YOUR BRITAIN / FIGHT FOR IT NOW'
Slogan, above and below central image. 'Your' in blue, 'Britain' in pink letters, 'Fight for it', printed in black, 'Now' in white.

'Clean, airy and well / planned dwellings / make a great contribu- / tion to the Rehousing / movement. This is a / fine example of a block / of workers' flats built / in London in 1936. / ISSUED BY A.B.C.A. / DESIGNED BY P.R.2. 70'
Poster text and publisher's details, lower right corner, beside image in margin.

Poster, 'Your Britain Fight for it Now', colour lithograph depicting a bomb-damaged street over which is superimposed an new, modern flats, designed by Abram Games for ABCA, London, 1942 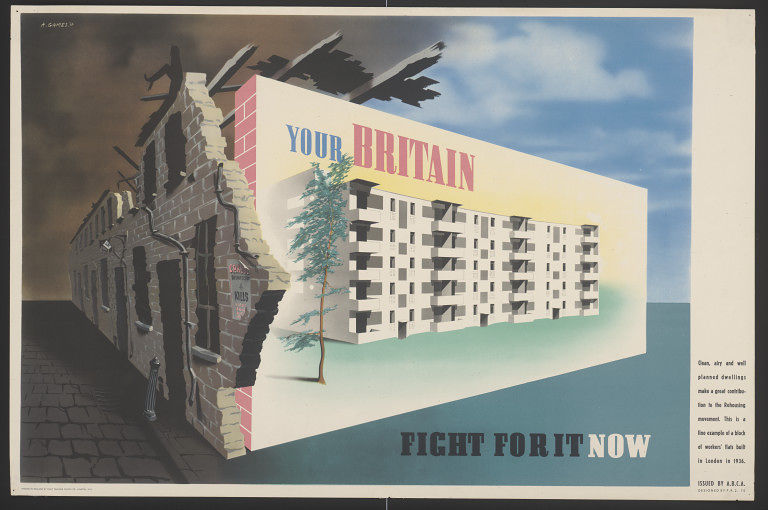