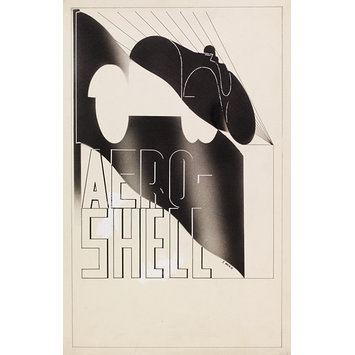 This design, showing the letters 'AERO-SHELL' in hand-drawn lettering, arranged in two lines, was one of the designs for the advertising campaign of Shell Mex and British Petroleum (B.P.) Ltd. for AeroShell by Edward McKnight Kauffer in 1932. Amongst these design versions, only a few were used, and this was one of them.

This design shows the letters 'AERO-SHELL' ,hand-drawn in lettering, arranged in two lines. Above it is an airbrushed illustration of a flag and a man driving a car, with the front reversed white on black.

Pencil, pen and ink, gouache, and airbrush on paper

'E.McKK.'
In pen at the right side of 'SHELL'. They are the initials for Edward McKnight Kauffer.

'B 90'
In pencil at the bottom right side on the front of paper. This is the job number assigned by Shell Mex and B.P. Ltd.

'ARTIST E. McKnight Kauffer / PRODUCT B.P. DATE / SEEN BY M.T. / JOB Nos. B.90 / RACK No. USED Yes / SHELL MEX and B.P. Ltd.'
In typewritten ink and pen on a blue form glued on the back of paper. Shell Mex and B.P. Ltd. probably used this form to keep a record of artists' designs.

Design drawing by Edward McKnight Kauffer for Shell Mex and B.P. Ltd. in 1932 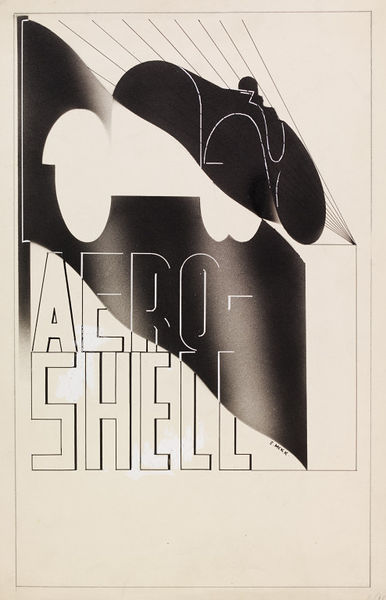