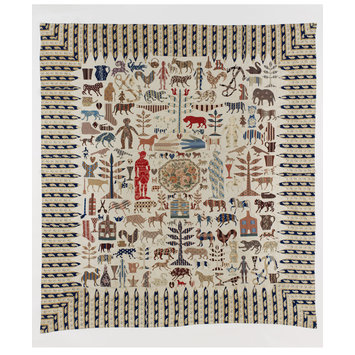 For this applique coverlet, the maker has cut out and stitched shaped pieces of fabric onto a plain ground material in order to create the design. The two silhouettes to the left and right of the central panel are based on Hiram Powers' 'The Greek Slave' (1846). Powers' sculpture portrays a girl capturing during the Greek War of Independence and put up for sale. Following its display at the Great Exhibition of 1851, the sculpture became one of the most recognizable and widely discussed figures of the second half of the 19th century. Sometimes interpreted obliquely as a critique of slavery in America, the figure appeared widely in ballads, satires, journalism, prints and engravings. Miniature copies were also popular for the rest of the century, and it is possible that one of these sources may have inspired the maker of the coverlet.

An appliqué coverlet of printed cotton silhouettes on a cotton ground, including both animate and inanimate objects: houses, socks, men on horseback, trees, scissors and a range of animals. At the centre is an octagonal ready-printed panel showing flowers on a pale-yellow ground. On either side are appliqued silhouettes of 'The Greek Slave' in printed cotton. Round the outer edge is a striped blue, white and yellow cotton border, cut into a zig-zag at its inner edge.

Given by Mrs E A Hunt of Wrotham, Kent, on behalf of the West Kent Federation of Women's Institutes. Little is known about the history when it came to the attention of the WI at an exhibition of needlework in East Kent (c.1920–22). It was subsequently purchased by a Miss Rowe and donated to the V&A in 1957. Prior to acquisition, it was assessed by the quilt historian Avril Colby, who suggested that the striped ‘fencing’ border and range of animals may indicate ‘rural family life on a farm’. With the identification of the central silhouettes, it is now thought that the coverlet is a more active engagement with the contemporaneous debates and a wider culture of exhibition and display.

On either side of the central panel are appliquéd silhouettes of The Greek Slave (1844). One of the most popular American statues of the second half of the nineteenth century, The Greek Slave portrays a Greek girl captured by the Turks and put up for sale in a Middle Eastern slave market. The sculptor said of his work:

'As there should be a moral in every work of art, I have given to the expression of the Greek Slave what trust there could still be in a Divine Providence for a future state of existence, with utter despair for the present, mingled somewhat with scorn for all around her . . . It is not her person but her spirit that stands exposed.'

The statue became one of the most recognizable and widely discussed figures of the second half of the nineteenth century, popularized through ballads, prints, satire, journalistic commentaries and engravings. It was exhibited in the American Section of the Great Exhibition in 1851, and miniature copies were available for the rest of the century; ‘so undressed, yet so refined, in sugar-white alabaster, exposed under little glass covers in such American homes as could bring themselves to think such things right,’ as the writer Henry James remarked.

Coverlet with The Greek Slave
Britain
About 1851

The two silhouettes to the left and right of the central panel are of Hiram Powers' The Greek Slave (1846) (see V&A: 19538.18). Following its display at the Great Exhibition of 1851, the sculpture became one of the most recognizable and widely discussed figures of the second half of the 19th century. Sometimes interpreted obliquely as a critique of slavery in America, the figure appeared widely in ballads, satires, journalism, prints and engravings. 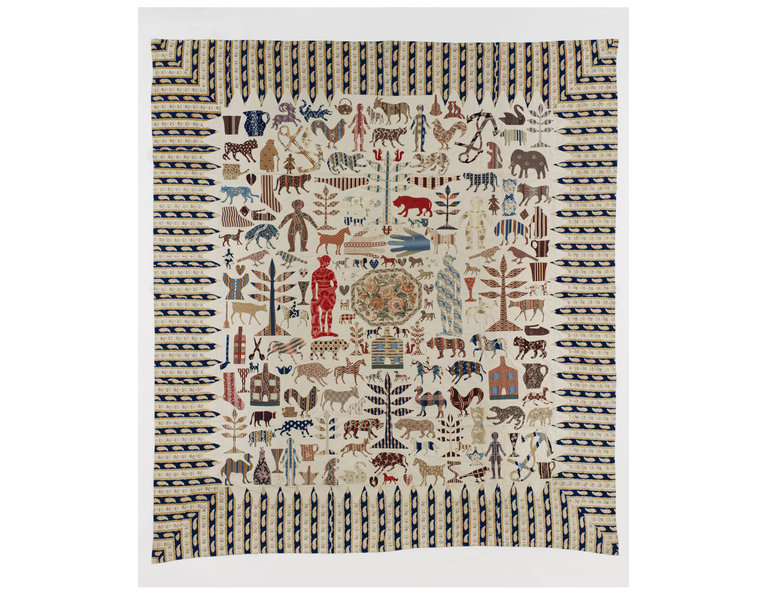