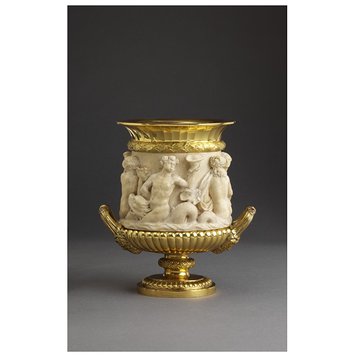 This vase is an electrotype, an exact copy in metal of another object. The Museum bought it in 1868 from Messrs Franchi and Son of Clerkenwell for £1.0.0.

Electrotypes were made using technology patented by Elkington and Company in Birmingham in the 1840s. Metal could be transferred from one object to another when immersed in a vat containing potassium cyanide and electrically charged. This vase was electroformed in copper in moulds taken from its original, and then electrogilded. The imitation ivory was cast in plaster.

Electrotypes are relics of 19th-century industrialisation. The process of electroplating and electrotyping favoured companies that could afford large factories and expensive technology. The power of the machinery at the disposal of the silver industry allowed modern mass production to develop. Hundreds of electrotypes could be created at once in the vats.

This electrotype was copied from an original made in 1815 of silver-gilt and ivory in the Royal Collection at Windsor Castle. The Museum bought electrotype reproductions so students could study ‘historic’ objects or works of art that were otherwise inaccessible.

Electrotype vase formed as a sleeve of plaster around an oval section body with flared lip, gadrooned base and foot. The plaster sleeve was cast from the original of carved ivory and depicts the Birth of Venus. This vase is of gilded copper made using the electrotyping process (patented in 1840 by Elkington and Company of Birmingham). It was copied from an original of silver-gilt and ivory in the Royal Collection.

Copied hallmarks: maker's mark, 'PS' for Paul Storr, town mark for London, duty mark, sterling mark and date letter 'U' for 'up to 13th June 1815'
Electrotypes rarely have the hallmarks of the original silver object copied as doing so infringed silver hallmarking law.

This vase was bought by the Museum in 1868 from Franchi and Son of 15 Myddleton Street, Clerkenwell for £1.0. It is an electrotype copy of a silver-gilt vase in the Royal Collection. The vase was a design tool for students in the government schools of design under the aegis of the Department of Science and Art.

Historical significance: As an electrotype this vase is an example of a 19th-century design model. Electrotypes play a key role in helping us to understand the V&A in its earliest days.

This vase is an electrotype, an exact copy in metal of another object. Electrotypes were a by-product of the invention of electroplating (silver plating by electrolysis).

ELECTROPLATING: Electricity revolutionised the trade of coating base metal objects with silver. Patented by Elkington and Company in the 1840s, this technique was the fulfilment of a century of research into the effects of electricity on metals. A negatively charged silver bar, suspended in a vat of potassium cyanide, deposited a coating of silver on a positively charged base metal (mostly copper, later nickel-silver) object immersed with it. Electroplated objects were fully formed in base metal before plating.

This vase was electroformed in copper from moulds of its original and then electrogilded. The imitation ivory was cast in plaster.

Henry Cole, the first director of the South Kensington Museum (V&A), quickly grasped the educational potential of this new technique. He employed Elkington’s and Franchi & Son of Clerkenwell to take moulds of historic objects in the Museum (at their own risk), create copies in a base metal and then electroplate them. These could be sold freely as reproductions, with a gold, silver or bronze finish, provided they bore the South Kensington Museum’s official stamp. To avoid breaking English hallmarking laws, all marks were to be deleted from copies of silver objects (not the case with this vase).

Original Label from Electrotypes Register:
CUP, "fictile ivory" or prepared plaster, with copper-gilt mounting, the body curved with a representation of the birth of Venus; on the cover are representations of shells etc. The original of ivory with silver-gilt mounting and gold cover is the property of Her majesty the Queen and forms part of the Royal Collection of plate at Windsor Castle. The ivory carving Flemish(?), 17t century. The mounting English, date 1785 [sic: should be 1815]. Messrs Franchi and Son.
Price £1.0.0 [c. 1868] 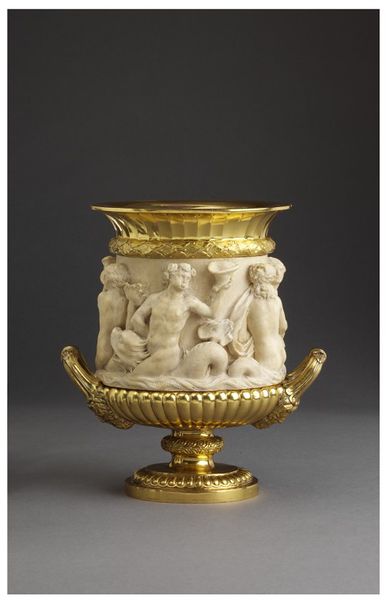