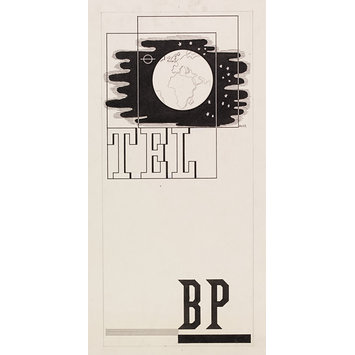 This design, showing the large capital letters 'TEL', which stand for 'tetra-ethyl lead' (an anti-knock additive in gasoline or petrol that can prevent premature detonation in the engine), and 'BP', which stands for 'British Petroleum', was one of the versions designed for the advertising campaign of Shell Mex and B.P. Ltd. for tetra-ethyl lead by Edward McKnight Kauffer in 1933. Amongst these design versions, only a few were used, and this was one of them.

This design shows the three large, outlined capital letters 'TEL' above which is the Earth with a backdrop of pitch black universe and a few stars. To the left of the Earth, a Saturn-like London Underground symbol can be seen indicating the concept of transportation. The letters 'BP', the name of the company, is at the lower right side in the same size as TEL but in a different font.

Pencil, pen and ink, and gouache on paper

'DESIGNED BY / 30 MAR. 1933 / E. MCK. KAUFFER'
In typewritten ink in the centre on the back of paper. The date indicates when this design was made.

'Cat No.1111'
In pencil marked with a box in the centre on the back of paper

'McKK.'
In pen to the bottom right side of the upper box. They are the initials for McKnight Kauffer.

Design drawing by Edward McKnight Kauffer for Shell Mex and B.P. Ltd. in 1933 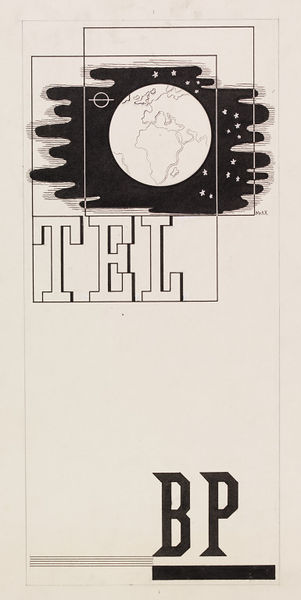