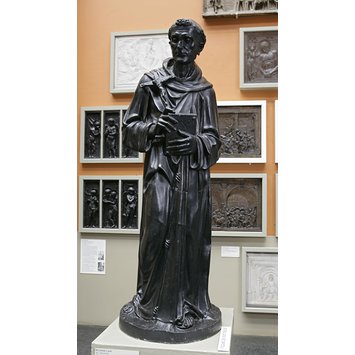 This is one of the saints from the elaborate high altar of the Santo in Padua, made by Donatello, which comprised numerous bronze figures and reliefs, copies of which are seen in the V&A Cast Courts. St Francis is shown holding a crucifix and the bible, his contemplative stance, suggesting his piety, is at the same time an elegant contrapposto pose, derived from classical figures.

Plaster casts were especially sought after during the 19th century, when reproductions of great works of sculpture and architecture were thought crucial for the training of artists. A separating substance was applied to the surface of the work to be reproduced, and a plaster mould made from that. The mould would then be used to make any number of additional plaster copies. These were often sold to artists, and later in the century to art colleges for study purposes.

Acquired in exchange from the Berlin Museum in 1899.
This cast (statue of St. Francis) was taken from one of seven figures which stand upon the high altar of the Basilica di Sant' Antonio, Padua.

This is one of seven figures in the round which stand upon the high altar. Their arrangement in the present reconstruction, dating from 1895, is incorrect. Modern critical opinion has not resolved the exact placement of these seven figures, but the proposed reconstructions all place the Madonna centrally, with St Francis and St Anthony flanking her.

The altar originally stood at the end of the choir, close to the ambulatory, but was dismembered in 1579, when officials of the Arca decided to replace it with a larger structure, designed by Girolamo Campagna and Cesare Fianco. Although most of Donatello's sculptures were incorporated into the new altar by 1582, it was not until 1895 that all the surviving components were united in the present fanciful reconstruction by Camillo Boito. The original form of the altar remains controversial, due to the loss of almost all the original architectural elements, except for a pair of volutes (item 8 below).

In the Museo Antoniano, Padua:
8.A pair of volutes, thought to have come from the canopy which once surmounted the altar.

In the Museo Salvatore, Romano, Florence:
9.Marble reliefs depicting the half-length figures of St Prosdocimus and another saint, possibly two of the four half-length saints seen by Marcantonio Michiel on the back of the altar, in the early 16th century.

St Francis holds a crucifix and a devotional book. His stance is contemplative, suggesting piety. It is also what is known as a contrapposto pose, a feature of classical sculpture that was revived during the Renaissance. The original bronze sculpture is in the basilica in Padua, one of a number of figures on an elaborate altar. [2014] 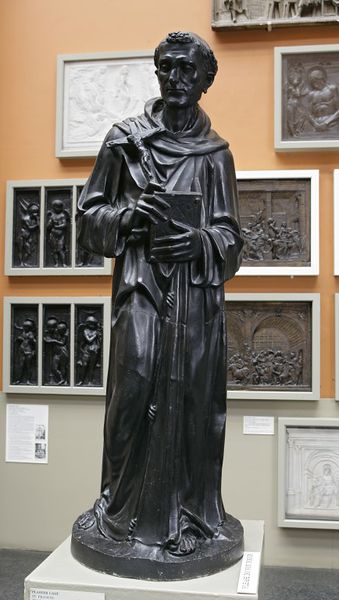