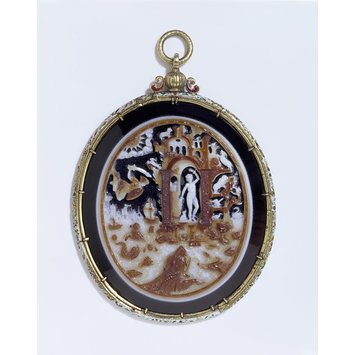 People
By family tradition the cameo was a present from Elizabeth I to Henry Carey, (1526-1596), 1st Baron Hunsdon, first cousin of The Queen. He was the son of Mary Boleyn, sister of Anne Boleyn, Elizabeth's mother. He had a prominent career as a courtier and soldier. He played an important role in the suppression of the rebellion of the northern earls in 1570, was appointed Lord Chamberlain in 1586, and was a commissioner at the trial of Mary, Queen of Scots in 1587. When the Armada threatened in 1588, he commanded Elizabeth's bodyguard at Tilbury in 1588.

Places
This is one of the four Hunsdon jewels which have long been associated with Berkeley Castle in Gloucestershire and have been lent as a group to the British Galleries. The Hunsdon Onyx, is mentioned specifically in the will of George Carey (1547-1603), 2nd Baron Hunsdon, dated 10 May 1599.

Onyx cameo set in an enamelled gold pendant worn from a chain. Represents Perseus rescuing Andromeda. Has a complex panorama of town and sea with ships and sea creatures.

The engraver has followed Ovid's version of the myth, although here Andromeda's rock by the seashore has become an elaborate domed and turreted island fortress, populated by a host of vividly-carved creatures. In the foreground, the sea is filled with marine animals, both fantastic and real. Andromeda stands beneath an arch, naked and shackled at the wrists and ankles, as the huge sea monster to whom she is offered as a sacrifice ploughs menacingly towards her through the waves. Perseus, in the act of flying past, has seen her and fallen instantly in love. He is caught at the moment he swoops down, armed with his sword and shield, to slay the monster and release the princess. In the finest of details, the anxious faces of Andromeda's parents can just be made out, peering through a window of her tower, and in the far distance we can discern the shore and a city, with a tiny trumpeter sounding the alarm from the battlements.

The earliest firm documentary reference to the cameo is found in the will of George Carey, 2nd Baron Hunsdon, who died in 1603, in which he bequeaths his 'greate Aggate wherein is embossed the Portraiture of Perseus and Andromache' to his wife and thence to his daughter Elizabeth, Lady Berkeley. George Carey's father, Henry Hunsdon, lst Baron Hunsdon was, however, first cousin to Queen Elizabeth I, and at one stage her nearest living relative. She maintained close contacts with him, creating him Baron Hunsdon on her accession and bestowing estates on him. Elizabeth stayed with him at Hunsdon House on several occasions, and the two are recorded as having exchanged numerous gifts. It is possible that the cameo was the subject of one of these royal gifts, although evidence to substantiate this has so far not been uncovered.

Precious and semi-precious stones carved with portraits or scenes from mythology, prized in antiquity, were again collected in Europe from the mid-15th century, interest only spreading to England from the Continent later. The acquisition of this cameo by a noble English family before the end of the 16th century is an early example of the enthusiasm for carved gems which was later to take such a hold on the English aristocracy during the 17th and 18th centuries.

Historical significance: This magnificent cameo is a tour de force of the engraver's art and ranks among the finest examples of the period. All the elements, from the elaborate scale of the design itself, the use of the four layers of light and dark strata in the stone to define the various elements of the composition, the extreme richness and delicacy of detail, the crisp carving and sumptuous ornamentation, indicate the hand of a master in the medium. Masnago originated from Milan, and was one of the foremost gem engravers at the Imperial Court of Rudolph II in Prague. Two cameos carry his monogram, and a large group of others are variously ascribed to him, to his workshop or style.

Of the four Hunsdon Jewels, this is the one supported by contemporary documentation. Dinah Winch has a copy of the will of George Carey (1547-1603), 2nd Baron Hunsdon, dated 10 May 1599, which she has transcribed: 'I give to my faithfulle vertuous and trewe lovinge wife the use and occupation of my greate Aggate wherein is embossed the Portraiture of Perseus and Andromache' [check] and other jewels to descend in the family 'soe longe as the conscience of my heires shall have grace and honestie to performe my will for I esteeme them righte Jewells and Monuments worthie to be kept for their beautie and rareness and that for money they are not to be matched nor the like yett knowne to be founde in this Realme...'

By family tradition the cameo was a present from Elizabeth I to George Carey's father, Henry (1526-96), 1st Baron Hunsdon, cousin of Queen Elizabeth. He was the son of Mary Boleyn, sister of Ann Boleyn. He had a prominent career as a courtier and soldier, played an important role in the suppression of the rebellion of the northern earls in 1570, was appointed Lord Chamberlain in 1586, was a commissioner at the trial of Mary, Queen of Scots in 1587 and commanded Elizabeth's bodyguard at Tilbury in 1588 when the Armada threatened. His son, George, was both diplomat and soldier in relations with the Scots, was appointed Captain-General of the Isle of Wight in 1582 and became Lord Chamberlain in 1596.


The Hunsdon Onyx
(Cameo with Perseus and Andromeda)
About 1575–95

George Carey, 2nd Baron Hunsdon listed this cameo in his will as ‘my greate Aggate’. It is the only surviving jewel of the three he considered ‘worthie to be kept for their beautie and rareness and that for money they are not to be matched nor the like yet knowne to be found in this Realme’. It is a masterpiece of Italian Renaissance carving. 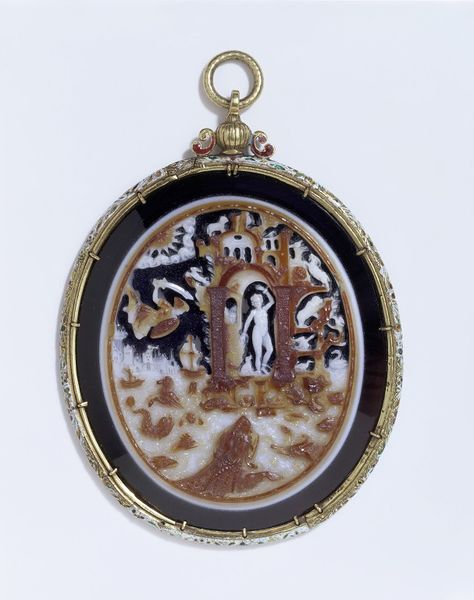