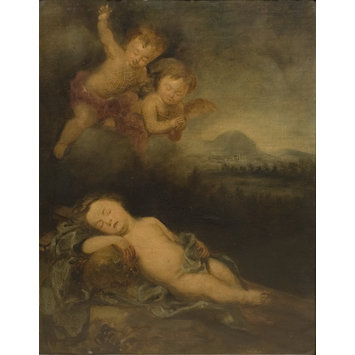 The Infant Christ Asleep on the Cross

Bartolomé Estebán Murillo (1617/18-1682) was born in Seville where he probably trained in the studio of Juan del Castillo (ca.1590-ca.1657). He received many commissions and worked especially for the religious orders but was also a renowned portrait painter. He may have undertaken a journey to Madrid where he could have met Diego Velazquez (1599-1660) however this cannot be confirmed. He died a few months after he fell from the scaffoldings in the church of the Capuchines in Cádiz, whilst still painting the main altarpiece.

This painting is a reduced copy after Murillo's The Infant Christ Asleep on the Cross, currently housed in the City Art Galleries, Sheffield. It shows the child Christ asleep on the cross, his arm resting on a skull lying beside him, both attributes alluding to his forthcoming sacrifice, while the two angels hovering over him echo his divine origins. Paintings representing the Child asleep were a popular subject in mid-17th century Spain as it combines the religious devotion with the depiction of childhood.

A naked child wrapped into a cloak is lying on a cross, his arm resting on a skull beside him; two angels hovering over him and in the background a mountain and a city.

'Miss M. Baker'
Inscribed on the back

Bequeathed by Rev. Alexander Dyce, 1869
South Kensington Museum Art Handbooks. The Dyce and Forster Collections. With Engravings and Facsimiles. Published for the Committee of Council on Education by Chapman and Hall, Limited, 193, Piccadilly, London. 1880. Chapter I. Biographical Sketch of Mr. Dyce. pp.1-12, including 'Portrait of Mr. Dyce' illustrated opposite p.1.

Historical significance: This painting is a reduced copy after Murillo's The Infant Christ Asleep on the Cross (141 x 108 cm), dated in the 1670s and currently housed in the City Art Galleries, Sheffield, and for which two connected drawings are known: one in the Kunsthalle, Hamburg and another one in the Louvre, Paris.
The painting depicts the child Christ asleep on the cross, his arm resting on a skull lying beside him and his naked body half hidden by a blue mantle while two angels dissimulated by clouds are watching over him from aloft. In the right background is a mountain with a city at the bottom, which probably represents the city of Jerusalem under the Olive mountain. The landscape, the skull and the cross allude therefore to the forthcoming sacrifice of Christ.
This work is inscribed on the back with Miss M Baker, which probably refers to the painter Mary Baker who is recorded as exhibiting at the Royal Academy and Society of British Artists from 1842 to 1860. The loose brushwork and the earthly palette differ significantly from the original which is dominated by a bluish tonality and a cool palette, and is executed with vibrant brushstrokes. Murillo made in this picture an interesting use of light and bathed his composition in an intense chiaroscuro, which enhanced by contrast the body of the Child and secondarily the bodies of the angels above him. However the artist failed or chose not to reproduce Murillo's dramatic effect of light and used on the contrary earthly and smooth pigments typical of the 19th-century development of naturalistic painting.
Representations of the Child Christ were very popular in Spanish paintings during the second half of the 17th century. It combined the fervent religious sentiment with the depiction of scenes of childhood, of which Murillo became the most authoritative exponent. Murillo produced in fact several versions of the sleeping child among which one is in the Prado, Madrid (No. 1003) and another in the Duke of Westminster collection, London. Murillo's work was probably produced for private devotion. 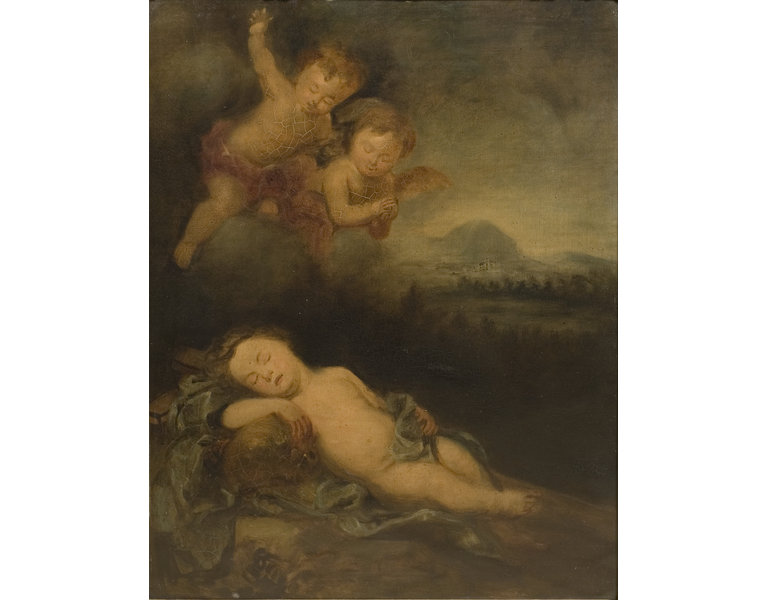