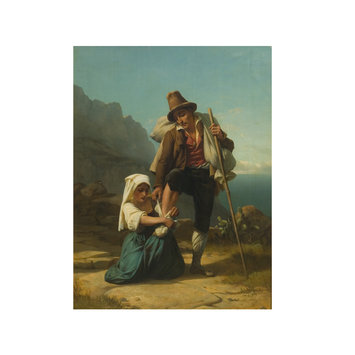 Jean-Léonard Lugardon (1801-1884) was born in Geneva to French parents. He first studied at the Geneva Art Society and later became a pupil of the Baron Gros and of Ingres in Paris. He continued his studies in Florence and stayed in Italy between 1825 and 1834. He became director of the school of illustration in Geneva until 1845, spent a year in Algeria and returned to Paris for several years. Illness forced him to rest almost entirely for the last 27 years of his life. He had a son, Albert (1827-1909), who was also a painter.

This painting is a fine example of Lugardon’s genre painting, one of the leading Romantic artists in Geneva. It shows two young beautiful people wearing Italian traditional costumes and set in an idyllic landscape overlooking a bay. The landscape is traditionally said to have been painted by the landscape painter A. Calame who was a close friend of Luagardon. Lugardon would therefore be only responsible for the figures. This type of paintings was extremely popular in the second half of the 19th century.

A wounded traveller, in rustic Italian costume, leaning on his walking staff as a young woman in local costume bandages his injured foot.

Historical significance: Lugardon was one of the leading Romantic artists in Geneva together with his friends Alexandre Calame, François Diday et Joseph Hornung. This painting is a fine example of such genre scene characterised by a high degree of finish and idealised figures, which can be considered as the equivalent of stock portraits in literature. The Romantic movement traditionally favoured subjects drawing from the folk culture, the national and ethnic origins. The painting presents here a combination of the two: beautiful but humble young people, wearing traditional costumes from the surroundings of Rome, set in an idyllic landscape.
The costumes depicted here are close to the ones represented by the Roman artist Bartolomeo Pinelli (1781 - 1835) and are therefore Italian, not Swiss as previously believed.
This type of pictures was quite popular in the second half of the 19th century and quite similar in style to the Biedermeier imagery.
This painting was bequeathed by the Rev. Townshend who owned a large collection of 19th-century landscape and genre paintings. It is not unlikely that Townshend, who resided part of the year in Lausanne, acquired this painting directly from the artist. 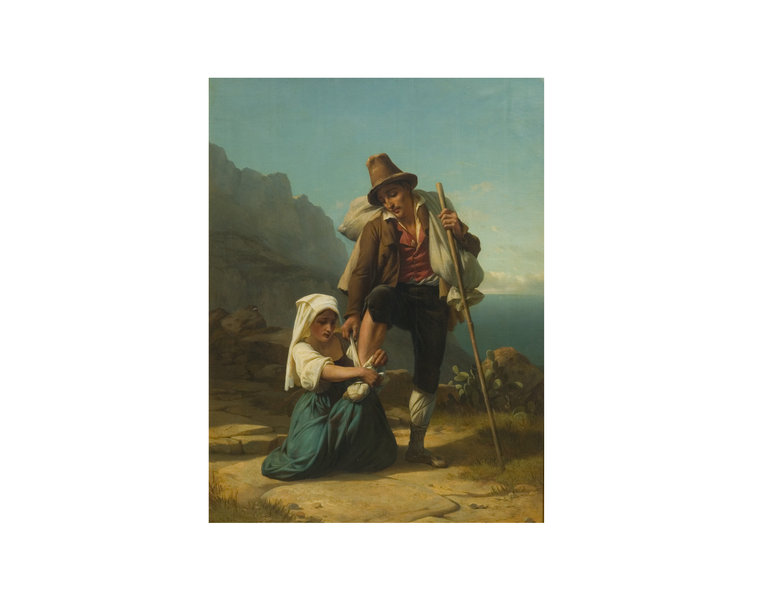