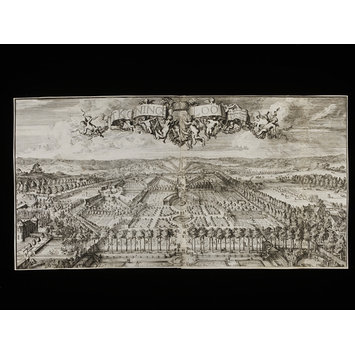 This etching by Romeyn de Hooghe (1645-1708) is one of a series of fifteen prints of the palace of Het Loo and its gardens. The set includes a panorama of the palace and thirteen prints showing views of different parts of the gardens. They were published together with a description of the gardens, in Amsterdam, by Pieter Persoy. The gardens were famous and inspired many prints and international commentators.

Het Loo was built by Prince William III of Orange (1650-1702) after he became Stadholder of Gelderland in 1672 and with that acquired the hunting rights to the Veluwe. He purchased the castle of Oude Loo in 1684 and the new lodge was built in the grounds and completed in 1686. The gardens were extended, which incorporating designs made by other artists, such as French designer resident in the Netherlands, Daniel Marot (1661-1752) and the author of these prints Romeyn de Hooghe.

In common with seventeenth century European practice the gardens were arranged along a central axis with an almost symmetrical arrangement of parterres on either side. Comments by Romein de Hooghe on his own designs for sculptures of river gods for the garden suggest that water was a dominant feature of the scheme. In the garden there are numerous fountains, canals and cascades, but also sculptures and fountains representing river gods, fish, dolphins, tritons and swans. Use of water and symmetry and unifying approach to design owes something to the ideas being developed in France André Le Nôtre (1613-1700, who designed the gardens at Versailles for the French king Louis XIV between 1661 and 1668. Inspired by earlier French gardeners but also classical and renaissance texts, Le Nôtre followed principles such as geometric proportion in nature and used water to create optical illusions and to unify the iconography of the scheme. He added a greater emphasis on order and unity of design by linking exterior and interior decorative schemes. This idea was followed at Het Loo, whereby Daniel Marot was involved in designing both the palace and gardens and elements of design overlap between exterior and interior. The parterres en broderie (garden compartments creating patterns from box-hedge and earth, in this period also incorporating clipped and ordered flowers, have the same pattern as found in a stucco ceiling inside the castle; ceiling paintings and silk hangings also incorporate vases found in the garden.

However, the unified plan seems not to have been followed for long in the garden. There are also incidental vases and sculptures, references to Hercules and elements reflecting William III's later status (from 1689) as King of England, including canals in the shape of a monogram of William and Mary II. Het Loo also differed from French gardens in that, while Le Nôtre's designs were characterised by the arrangement of gardens along axes with long and wedge-shaped parterres accentuating length through an illusion of perspective, Het Loo had rectangular parterres that exphasized width. This was a more traditional Dutch practice found at other gardens such as the Huis ter Nieuwburgh. Also, Le Nôtre preferred simplified schemes and used parterres en broderie and flowers sparingly only to accentuate unity of design. The Dutch were renowned for their cultivation of flowers, so in their gardens different flower species were separated within the parterres to showcase them.

Two sheets pasted together forming the top part of a bird's-eye view of Het Loo and the gardens. The whole image consists of four sheets printed separately. Titled within a banderole across the top, with coat of arms, topped by a crown and corucopia, the banderole surrounded by putti holding garlands. 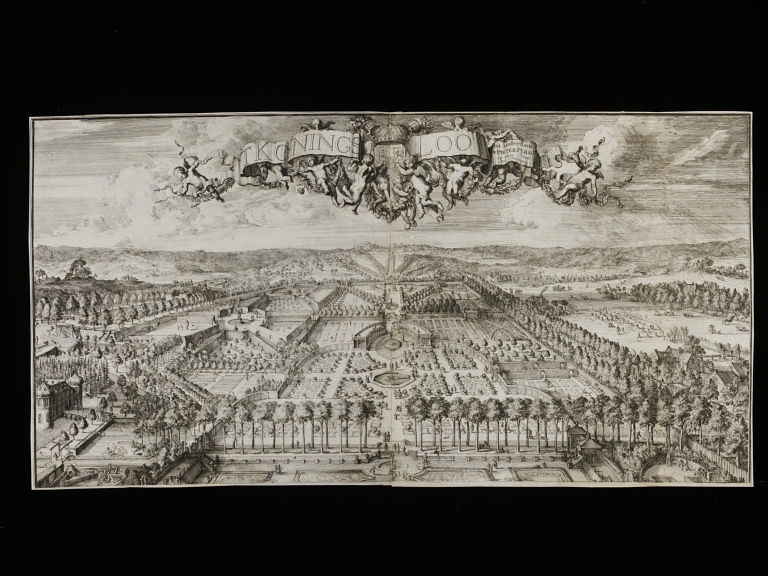