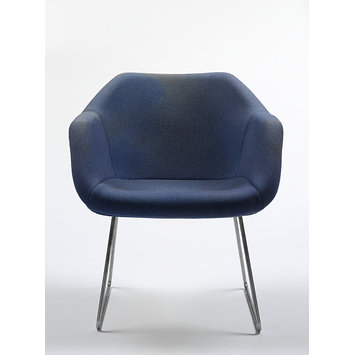 The Polypropylene chair is Day's most successful chair. It became standard institutional and school seating in the UK and millions were sold internationally. The name refers to the material used to make its shell - polypropylene, the revolutionary new plastic invented by the Italian chemist Giulio Natta in 1954 (he won the Nobel Prize for Chemistry in 1963). The chief virtues of the material were its lightness, flexibility, inertness and above all the ease with which it could be injection moulded. By the end of the 1950s Shell was manufacturing the material and promoting its use through design competitions. Robin Day was invited to judge one such competition and realised he had discovered a perfect material for mass-produced furniture.

The chair represents Day's commitment to mass-produced, low-cost furniture but also his curiosity and determination to engage with new materials and technology. Robin Day was one of the first designers to acknowledge the potential of polypropylene.

Construction:
The seat is made from a single piece of injection-moulded polypropylene which forms an ergonomic U, rising on either side to form arms. The seat is upholstered with a woven synthetic fabric in four pieces; the seat, the back and both arms. The legs are made from one piece of bent tubular steel, are fasten to the shell with bent steel plates which are screwed its underside.

Condition:
The white plastic is slightly discoloured through age. Rust spots are present on the legs and the fastening plates. There are some light acretions on the upholstery.

London (designed and made)

Chair was part of the furniture in Robin Day's House in Cheyne Walk in London and later in Chichester.

Robin Day was undoubtedly one the most important British furniture designer of the 20th century. Together with his wife, Lucienne Day, he actively introduced and promoted modernist design in Britain in the second half of the 20th century. Typically for this optimistic period, they intended a broad reach rather than a luxury market and worked with manufacturer's like Hille International and department store Heals.

The Polypropylene chair is Day's most successful chair. It became standard institutional and school seating in the UK and millions were sold internationally. It represents Day's commitment to mass-produced, low-cost furniture but also his curiosity and determination to engage with new materials and technology. Robin Day was one of the first designers to acknowledge the potential of polypropylene, a light, strong, heat-resistant and hard-wearing, suitable for a mass market.

Since the 1950s, Robin Day had worked with British manufacturer Hille International which intended to overcome their period furniture reputation by collaborating with a young designer. Day designed a number of simple but elegant chairs, tables, desks and storage units, often using new wood- or metal working techniques. Working with polypropylene posed a challenge for the manufacturer. After the success of the Polypropylene Chair in 1963, went on to create a whole ‘polypropylene’ family - the 1967 Polypropylene Armchair, the 1971 Series E school chairs and the 1975 jaunty indoor/outdoor Polo chair. The dark blue version of the Polypropylene Armchair was introduced in 1968. 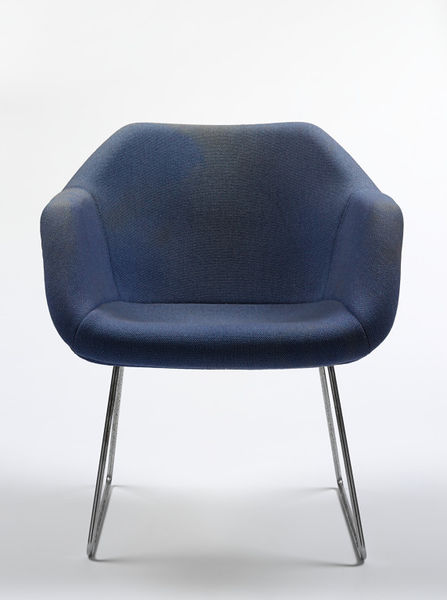