This table is one of a group of at least six that are thought to relate to the wars between Venice and the Ottoman Empire in the Peloponnese in the 1680s-90s. They seem to celebrate the Venetian conquest of the Morea (as the Peleponnese was then known) in 1685-88. This is suggested by the subjects depicted in their marquetry tops: this table shows a galley of warriors leaving a sea port, with smaller scenes depicting warfare between European and Ottoman troops. Two other table tops from the same group depict views of Vienna and Nafplio (then called Napoli di Romania) respectively: two cities that were subject to sieges during the wars. It is possible that the tables were commissioned by Francesco Morosini, the commander of the Venetian troops, who was responsible for the capture of Nafplio in 1686 and later became Doge of Venice.

This table and its pair, now in the National Museums of Scotland, are the only ones that seem to retain their original bases. Vigorously carved in boxwood, these echo, in sculptural form, the scrolling acanthus motifs of the marquetry top, as well as the martial subject matter, reflected in carved military trophies.

The tops of the tables are all signed by either Antonio or Lucio De Lucci. As yet, liittle is known about the De Lucci, but their workshop must have been significant.

The top is veneered with an ebony ground, divided into nine primary compartments by broad lines of strapwork in brazilwood (pernambuco), outlined in fine ivory stringing. The central pictorial panels have secondary scenes below and to the left and right, while an armorial cartouche fills the area above. Large areas of scrolling acanthus marquetry fill the space between the pictorial areas and the composition is finished in the corners with further small figure scenes. The marquetry, of European and exotic hardwoods, is supplemented with stained horn, ivory and pewter details. The acanthus areas are embellished with weapons, birds, animals, putti and dwarfs.

The central subject of a galley containing men firing guns, sailing away from a port city, is based on a print published in Florence in 1608. It is one of a series of etchings by Remigio Cantagallina after Giulio Parigi, published as a record of a mock-battle held on the River Arno as part of the celebrations for the wedding of Cosimo II de' Medici and Maria Magdalena of Austria. The specific print on which this table top is based depicts the ship of the army of Chalcis (the print is titled 'Capitana dell'armata di Colco'). The figures are slightly adapted in the table top to give them a more martial and more exotic appearance. Other elements of the marquetry design are also based on prints: the dwarf figures are based on the Varie Figure Gobbi by Jacques Callot, published in 1616.

The lower scenes on each table depict a mounted stag hunt while the remaining four scenes depict mounted warfare, one, on the second table, including a fortress defended by cannon. Some of the figures are turbaned and fight with scimitars while one carries a flag bearing three crescents. The figures in the top right corner of the first table and the top left of the second carry scrolls inscribed ‘LVCIO D’LVCCI FECE’. The figures in the other two top corners smoke long pipes.

The boxwood bases comprise four massive scrolling legs joined with scrolled x-form stretchers. The legs and stretchers are profusely carved with acanthus foliage, fruit and flowers while the deep friezes bear trophies of helmets, arms and trumpets. The bases have undergone restoration on a number of occasions with some sections of carving replaced and the structure re-enforced with hidden metal straps. The tops have also been restored more than once and on both tables the arms of the Duke of Buccleuch, on ivory, have been inserted in place of the arms of the original owner.

The top of marquetry of European and exotic hardwoods, supplemented with stained horn, ivory and pewter details. The base of carved boxwood.

Acquired with support from The Friends of the V&A, The Art Fund (with a contribution from the Wolfson Foundation), and The Horn Bequest (RF 2011/999)

The tables were previously in the collection of Walter John Mantagu-Douglas-Scott, 8th Duke of Buccleuch and 10th Duke of Queensberry, KT, PC, GCVO, until they were sold as a pair at Christie's, London, on 11th March, 1971 (lot 53). They were again sold at Christie's in London on 7th December 2006.

They were acquired through Edward Holmes Baldock by Walter Francis Montagu-Douglas-Scott, 5th Duke of Buccleuch and 7th Duke of Queensberry (1806-84) in 1833 and a bill for them survives in the Buccleuch archives. It is likely that the ivory cartouche bearing the arms of the Duke of Buccleuch was added or altered at this time. In the 1936 inventory of Dalkeith Palace, they were listed in the Centre Hall and it is likely that they were always intended for that place. Dalkeith was considerably enriched by new furnishings in the 1830s and it was at that time that the suffix 'Palace' began to be used for the house. The interiors are on a very grand scale and would easily absorb these tall, large tables.

It is possible that Baldock's supplier was an Italian dealer, Signor Gasparoni. Gasparoni,then active in Milan, is documented as having bought up the entire contents of the Doge's Palace in 1833 or 1834, subsequently chartering a vessel to ship them to England. He offered the furniture to several dealers, namely Colnaghi, Baldock and Town & Emanuel (who offered him the best price). He also sold piece to the Duke of Buckingham for Stowe House, Buckinghamshire (sold at Christie's house sale at Stowe, 6 August 1842, lots 221-2). Lot 274, sold 4 July, was a pair of frames, also said to have come from Gasparoni. Pieces possibly related to this deal survive in houses throughout Britain. Two chairs and twelve stools said to have been sold by Gasparoni from the Doge's Palace, and sold via Town & Emmanuel, are at Burghley House, Lincolnshire. At Belvoir Castle there are six armchairs in the manner of Brustolon, all said to have come from the Borghese Palace at Rome, but possibly also from this Gasparonii cargo, given that it is much more likely that they came from Venice and that there were many acquisitions for Belvoir in the first half of the 19th century. Longleat House, Wiltshire, also shows a set of Venetian armchairs in the manner of Brustolon and it is equally possible that these have an origin with Gasparoni. Further similar chairs were at Mentmore Towers, Buckinghamshire, gilded in the 19th century (see Catalogue of French and Continental Furniture, Tapestries and Clocks, sold on behalf fo the Executors of the 6th Earl of Rosebery and his family. Sotheby Parke Bernet & Co., sold on the premises 18-20 May 1988, lot 876). This pair of chairs were said to have been bought from the London dealer Nathan and to have come from the collection of Horace Walpole at Strawberry Hill, having previously come from the Doge's Palace, Venice, but Sotheby's were unable to identify them with any particular lot in the 1842 sale of Strawberry Hill (reference to 'Black, p. 127'. which is not referenced in the bibliography). It is possible that these were the ones from Stowe, two famous sales having been confused. The ~Stowe sale makes reference also to 'specimens of the same furniture' at Wilton House and at Narford Hall, Norfolk. The chairs from Narford were acquired for Manchester City Art Gallery in 1983 (see Helena Hayward 'Four Italian Baroque Parade Chairs' in The National Art Collections Fund Annual Review 1984, pp. 141-2) and have the inventory numbers 1983.910/4.

It is however, possible, that these pieces came into Baldock's hand other than via this famous consignment. Baldock had an interest in Italian as well as French furniture and had connections with the Italian dealer Abbé Cellotti, with whom he worked on the importation of a pietre dure table top sold to William Beckford for Fonthill. On 5 December 2014, lot 65, Bonham's sold a table in Louis XV style, set with marquetry panels by Francesco Abbiati and stamped EHB for Edward Holmes Baldock. This must have been made at about the time that Baldock offered these tables to the Duke of Buccleuch. A year earlier he had offered an Italian cradle to the Duke, sending a sketch of the piece. It is also possible that Baldock was directly in contact with Gasparoni.

Table
About 1686
This table was probably made to celebrate
the Venetian recapture of the seaport Nafplio
during the war with the Ottoman Turks over the
Peloponnese Islands. The marquetry top depicts
battles between Turks and Europeans. The
scenes are surrounded by abundant acanthus
leaves and military trophies that are echoed in
the vigorously carved base.
Italy (Venice)
Top by Lucio de Lucci
Base possibly by Andrea Brustolon
Marquetry top in European and tropical
hardwoods, with stained horn, ivory and
pewter details; boxwood base
Acquired with support from the Friends of
the V&A, the Art Fund (with a contribution
from the Wolfson Foundation), and the
Horn Bequest
Museum no. W.6-2012 [november 2015] 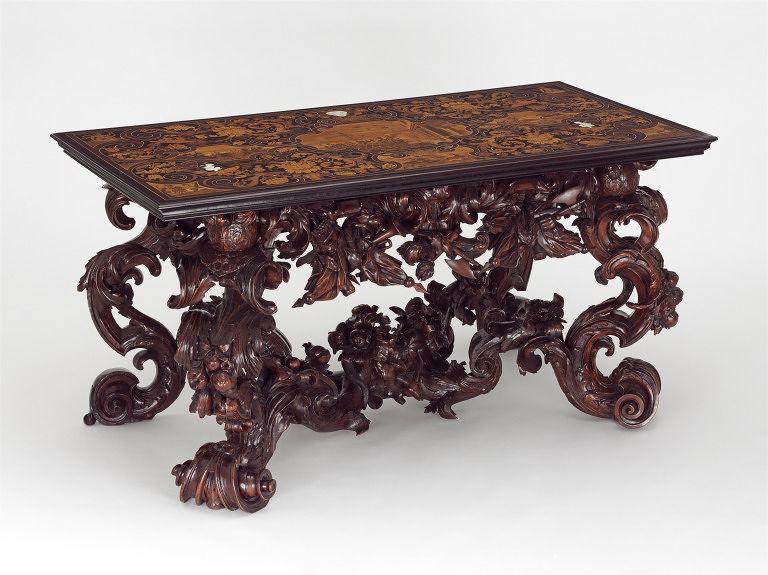