With Fractured Values, ‘New Medallist’ Heidi Hinder reflects upon an event that deeply marked her life and the fear of losing a loved-one. Using the skull as a central motif, she created a contemporary memento mori of steel, acrylic and silver. Thought-provoking, Fractured Values embraces inspiration from various media and traditions to engage with the viewer’s perception and evoke universal ideas about the value of human life.

A circular steel medal, encased on both sides by a slightly convex layer of clear, scratch-resistant acrylic, bezel-set into a thin, flat silver ring. Obverse and reverse: an x-ray image of a woman's skull in front view etched onto both sides of the steel. The image appears illuminated and holographic under light. The silver ring is hallmarked with the maker's initials 'HH', the '923' standard, the 'anchor' marking for the Birmingham Assay Office and an 'm' for the year of production, 2011.

This medal was bought from the artist in 2012, when it was shown at the V&A as part of "The New Medallists", a display celebrating the first six years of the New Medallist scheme. An initiative run by the British Art Medal Society (BAMS), this scheme is designed to breathe new life into the tradition of the art medal by nurturing a new generation of medallists.

Heidi Hinder (born 1976) graduated from Birmingham City University's School of Jewellery where she was artist-in-residence when she became the 2010/11 New Medallist. Attracted to medals as objects invested with meaning, Hinder places perception at the heart of her practice. Her medals show her interest in optical devices, sciences and literature.

Inspired by the eerie quality of the early photography of Warren de la Rue (stereograph glass positive of the moon, Museum no. E.131-1993), this medal was created with materials and techniques taken from jewellery. The field, of etched steel, is protected by an acrylic cover like a medallion in a glass locket, while the rim, made of silver, is hallmarked. Beyond evoking the tradition of the memento mori, the medal has an autobiographic resonance: on either side, the central motif of a skull is based on x-rays of the artist's mother. Holographic, the skulls' features become more or less visible as the object is shifted in the hand, thus lending a spectral character to the object. 'Beyond their medical function, the x-rays are here seen in their pictorial rather than clinical quality, to invoke an emotional response. Thus appropriated, they eloquently express the fear of losing a loved one' (Leavitt Bourne and Vandenbrouck-Przybylski, 2012, p. 50).

‘As human fortunes fluctuate at an increasingly rapid rate, ideas about value remain elusive. The transience of life is evoked in the holographic image of the skull which is fully illuminated only in certain angles of light. The original x-ray was taken of my mother after a near-fatal car accident. Fortunately there were no fractures to her skull: invaluable good fortune.’ 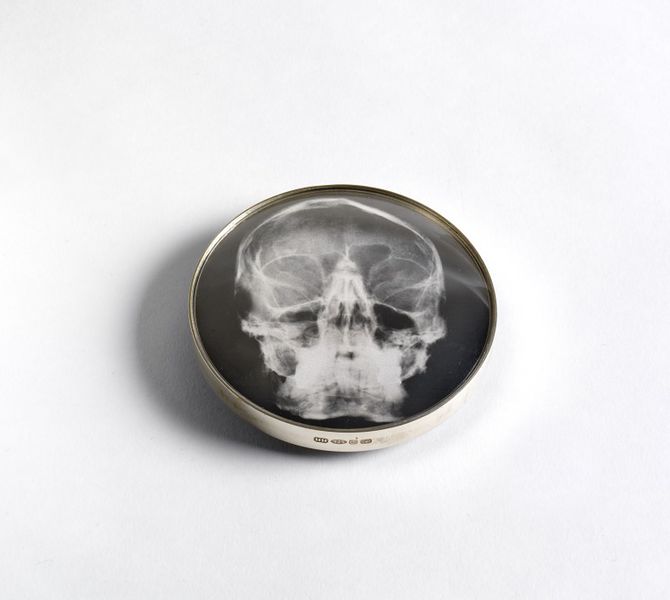