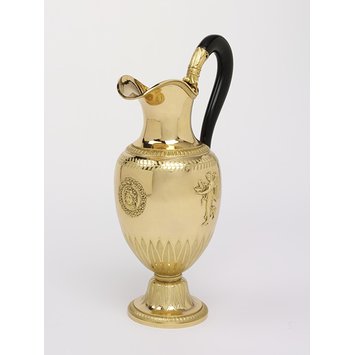 This ewer is part of a composite tea service consisting of a hot water urn, sugar bowl, tea caddy, teapot and ewer. The firm of Jean-Baptiste-Claude Odiot was one of the most important and influential Parisian silversmiths at the beginning of the 19th century. Skilful practitioners of the neo-classical style, Odiot were patronised by the aristocracy of Europe. J.B. C. Odiot's son, Charles Nicolas studied English technique and style at Garrards and took over the family business in 1827. Tea drinking after dinner became fashionable in the early 19th century, even in France. In 1827, Domestic Economy and Cookery for Rich and Poor reported that " In France, now, the tea-table is partially introduced to accommodate the English, which serves to show off their nice cakes and bon bons…"

Maker's mark of Charles-Nicholas Odiot used by him since 1826.

Excise mark: Large excise mark for silver in use in Paris between 16 August 1819 and 9 May, 1838. Anvil mark,
The above marks are struck only once.

Restricted warranty mark: The Boar's head in use in Paris from 10 may 1838 (struck three times).

Historical significance: The Odiot workshop was one of the largest, most prestigious in Paris, supplying the court and aristocracy. It was quite usual to make up sets of tea, coffee or other services from stock. Designs and casting patterns were kept and re-used as necessary.

The bowl is characteristic of Odiot's production and the so-called "Empire" style, popular in France in the early 19th century. The use of classical motifs and figures applied to plain surfaces, and for pouring vessels, spouts ending in animal's heads are typical. It was considered the epitome of French stylishness in England. The French craft, on the other hand, looked to England for technical developments; Charles-Nicolas spent some time working as a modeller for Garrards in London. 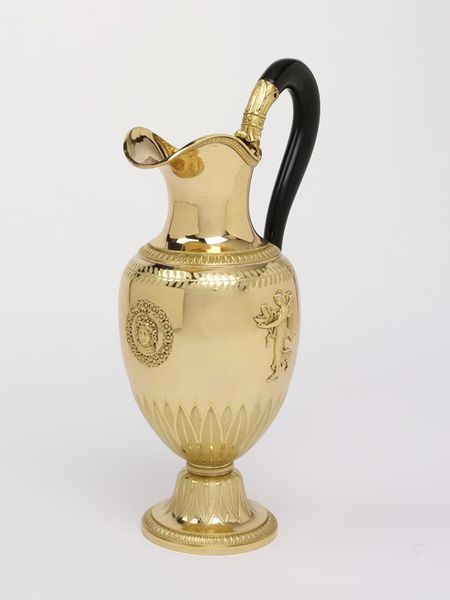