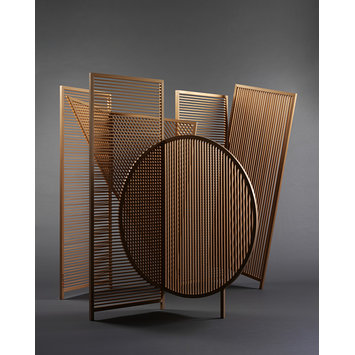 These screens are the first of a series of projects in which Eindhoven-based designers BCXSY (Boaz Cohen and Sayaka Yamamoto) worked with specialist craftspeople and techniques. The screens were made in Tokyo by Seihachi Tanaka, who is a master of Japanese joinery. Cohen and Yamamoto are interested in the potential which traditional crafts offer contemporary design practice. The overlapping shapes that make up these screens re-work the conventional forms of Tategu,a term indicating wooden sliding screens and doors.

The series is composed of three two-fold screens of untreated Hinoki (Japanese cypress) wood. Each screen is made up of two interlocking shapes, which meet at a central folding join. The shape combinations are as follows: rectangle and rectangle; rectangle and triangle; rectangle and circle. On each screen, the shapes are formed from an external frame. These frames are then punctuated by long wooden struts that run across the shape, either horizontally or vertically, at evenly shaped intervals. On each of the screens the two component shapes have their wooden struts running in opposite directions - this creates a cross-hatching effect at the point at which the two shapes meet. The screens were made applying skiils of traditional Japanese joinery, often described as Tategu, a term indicating movable doors and screens as indoor furniture in wood.

The panels are joined together using concealed cylinder hinges. This type of 'invisible' hinge is used in cabinet-making, but is not typical of Japanese screens. The screens each stand on three wooden feet.

All three screens are numbered. They all feature both the craftsman Seihachi Takan's signature and BCXSY's mark (showing the designers' two silhouettes in profile).

The 'Join' screens were designed by BCXSY, a design collective formed in Eindhoven in 2007 by Boaz Cohen and Sayaka Yamamoto. Born in Israel in 1978, Cohen moved to the Netherlands in 2000, where he attended the Design Academy Eindhoven from 2001 to 2006. There he met Sayaka Yamamoto, a graduate of Hiko Mizuno Jewellery College, born in Japan in 1985. Yamamoto graduated from the Design Academy Eindhoven in 2008. To create the 'Join' screens, BCXSY collaborated with Seihachi Tanaka, who is a master of the Japanese joinery. Each set of three screens was handmade in Mr. Tanaka's Tokyo workshop. The process of making the screens is lengthy, with each screen taking on average a month to make.

The screens were presented at Milan Design Week in 2010, at the Italian gallery Spazio Rossana Orlandi. The screens won the Wallpaper* design award in 2010.

'Origin part 1: Join' is the first part in Eindhoven-based studio BCXSY's exploration into the potential of traditional craft techniques for contemporary design. To create the 'Join' screens, BCXSY collaborated with Seihachi Tanaka, who is a master of the Japanese joinery which is often associated with the term Tategu. The term describes wooden movable screens or doors as indorr furniture. The common technique to create screens for Japanese houses uses long indented wooden struts which are interlocked within a frame, . The 'Join' screens use this technique to create forms not found in conventional Tategu work. With their interlocking planes and shapes, each of the series' three screens create delicate shifting patterns at the point at which the two planes meet.

This screen was created by the Amsterdam-based design studio BCXSY in collaboration with the Japanese master-joiner Seihachi Tanaka. He makes screens in which geometric arrangements of wooden struts are interlocked within a frame. BCXSY’s innovative design incorporates shapes and planes not usually found in traditional Japanese screens. This draws attention to Seihachi Tanaka’s exceptional craftsmanship. [55]

Number 1 from an edition of 8 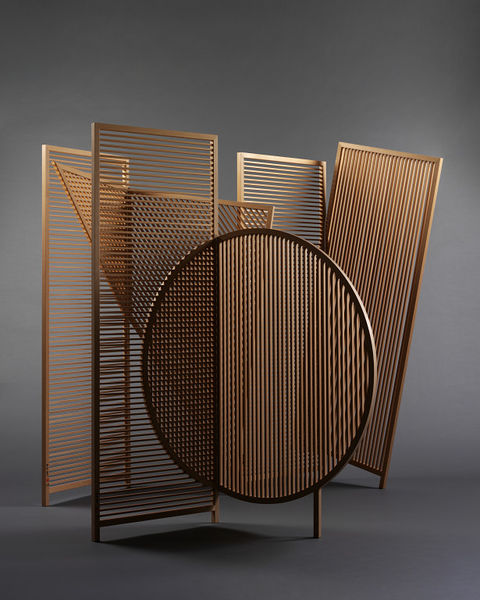