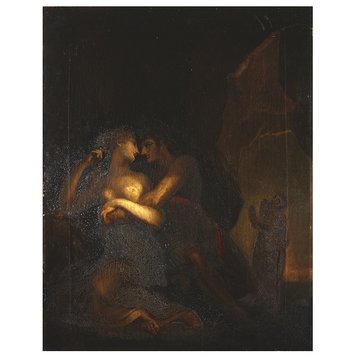 The Poet Observing Nerea with Her New Lover in Her Grotto

This painting illustrates the Latin author Horace's Epode 15 which relates the dying love between the poet and his lover Nerea. Although extremely abraded, the picture shows the poet Horace in the background creeping towards the new couple that Nerea formed with her new lover, a young man she had chosen randomly out of pique. This mysterious scene is a fine example of Fuseli's wide-ranging imagination and favourite subject matters based on intense passion, fairy mythology and demonic superstition.

A man and a woman embraced in a cave, in the entrance at right a man creeps towards them.

Historical significance: Fuseli was particularly interested in literary subjects and produced a number of illustrations for classical texts, Dante’s Divine Comedy, and Romantic poetry such as Lord Byron’s. He also provided a series of illustrations for Thomas Thomas Macklin (c. 1760-1800) for his Poets’ Gallery (1779-1788). The present composition was engraved by A. Smith and published by Suttaby, Evance & Fox in London as an illustration for Horace’s Epode 15 in 1813 (British Museum, 1864,1210.114), facing p. 172. Although little is known on the genesis of the painting, the date of the engraving provides a limit post quem the painting cannot have been done.
The painting was bequeathed to the museum by the Rev. Alexander Dyce but in its post mortem inventory it was given to an unknown painter and entitled ‘Courtship’. The Rev. Dyce who was a literary man who owned the complete works of Horace’s poetic oeuvre in several editions. He probably therefore knew perfectly what the painting represented but did not make a note of it.

Oil Painting, 'The Poet Observing Nerea with Her New Lover in Her Grotto', Henry Fuseli, 1810-1813 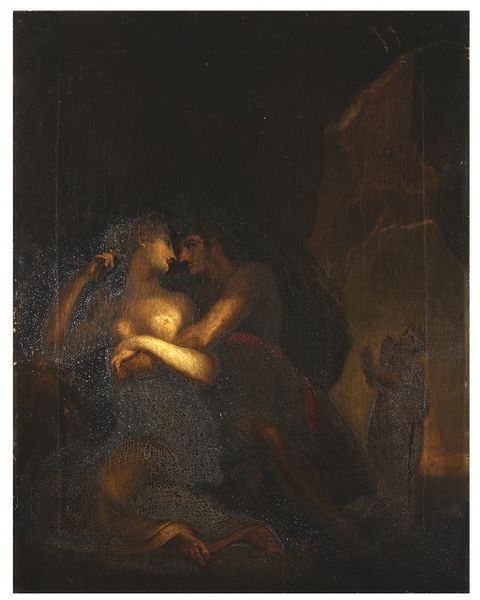