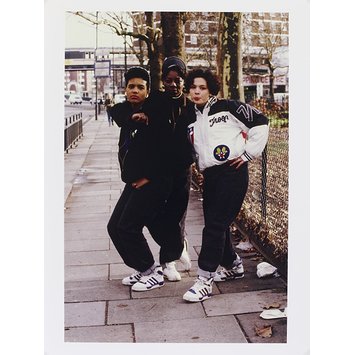 Norman ‘Normski’ Anderson was born in Northwest London in 1966 and became a documenter of British youth culture in the 1980s and 1990s. Normski was part of the UK hip hop scene during this period and his photographs record the styles adopted by hip hop artists like the London-based She Rockers.

Donna ‘She-Roc’ McConnell, Dupe Fagbesa and Alison ‘Betty Boo’ Clarkson made up the rap trio She Rockers, which gained attention in the late 1980s alongside other British female hip hop groups like Cookie Crew. She Rockers worked with the American hip hop group Public Enemy, after performing an impromptu rap with them at a McDonalds in Shepherd’s Bush. British hip hop fashion was influenced by the style of clothing worn by Public Enemy and other popular American hip hop artists, such as Run DMC and the female group Salt-n-Pepa. The baseball jackets, snapback caps, Adidas high-top trainers and large earrings worn by the She Rockers show the way in which these trends were adopted in Britain.

A colour photograph of three young women posing together on the pavement of a busy street. Behind them are a block of flats, a shopping centre and an elevated walkway over the road. Two of the women wear baseball caps and they are all wearing large earrings and other adornments. They wear baggy trousers with thick roll-ups, Adidas trainers and baseball jackets.

Norman ‘Normski’ Anderson was part of the hip-hop
music scene of the 1980s. He photographed British youth
culture for magazines including The Face, i-D and Vogue.
The hip-hop style was seen as a modern expression of black
consciousness. It often combined branded sports clothing
with items that reflected black heritage, such as the West
African fabric, or Kente cloth, modelled here by the ‘African
Homeboy’. 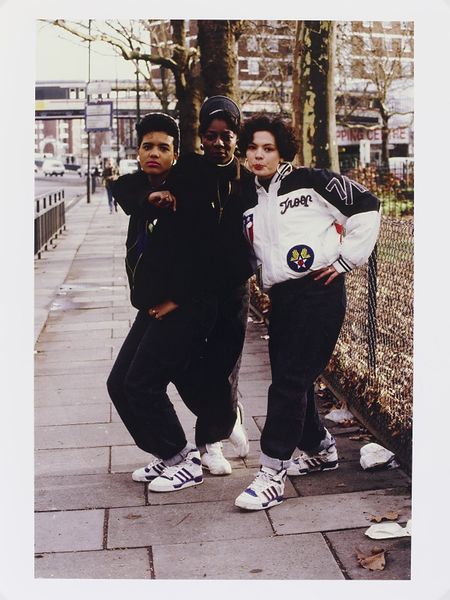