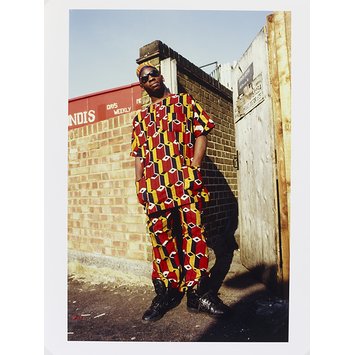 Norman ‘Normski’ Anderson was born in Northwest London in 1966 and became a documenter of British youth culture in the 1980s and 1990s. As part of the UK hip hop scene during this period he photographed fashion associated with the music style.

1980s hip hop style and attitude was often seen as a modern expression of black consciousness. The music culture had a large black following from its beginnings in the Harlem and South Bronx areas of New York, where there were large African American communities. Black followers of hip hop often combined branded sports clothing with items that reflected their cultural heritage. Kente-cloth crowns became a popular statement piece after the American group Salt-n-Pepa wore them alongside contemporary clothing. The bold patterns of Kente-cloth, a traditional West African fabric, articulated the pride many people from the black Diaspora retained for their African heritage.

Normski replicated the modern use of Kente-cloth in an outfit he put together with hip hop clothing retailer Four Star General for the fashion exhibition ‘Streetstyle, From Sidewalk to Catwalk, 1940 to Tomorrow’ held at the V&A in 1994-5. He created two other looks for this exhibition and all three remain in the V&A collection.

The V&A acquired seven photographs by Normski as part of the Staying Power project. Staying Power is a five year partnership between the V&A and Black Cultural Archives. The project aims to explore black British experience from the 1950s to the 1990s through photographs acquired by the V&A and oral histories conducted by Black Cultural Archives. A photograph by Jennie Baptiste titled ‘Brixton Boyz’, which explores the use of branded designer clothes to make fashion statements, was also acquired as part of Staying Power.

Colour photograph of a young black man standing outside in front of an open wooden gate and a brick wall. The man is wearing a colourful top and trousers, which have a matching black, red and yellow pattern of cascading steps. He is also wearing black high-top trainers, black sunglasses and a black skull-cap with a corresponding red and yellow hat on top of it. He has his hands in his pockets and is leaning against the wall, behind which part of a red Londis delivery lorry can be seen. There are signs on the gate, one of which reads 'FLATS 1234 - 410 Brixton Road'. There is blue sky in the background at the top of the image.

Norman ‘Normski’ Anderson was part of the hip-hop
music scene of the 1980s. He photographed British youth
culture for magazines including The Face, i-D and Vogue.
The hip-hop style was seen as a modern expression of black
consciousness. It often combined branded sports clothing
with items that reflected black heritage, such as the West
African fabric, or Kente cloth, modelled here by the ‘African
Homeboy’. 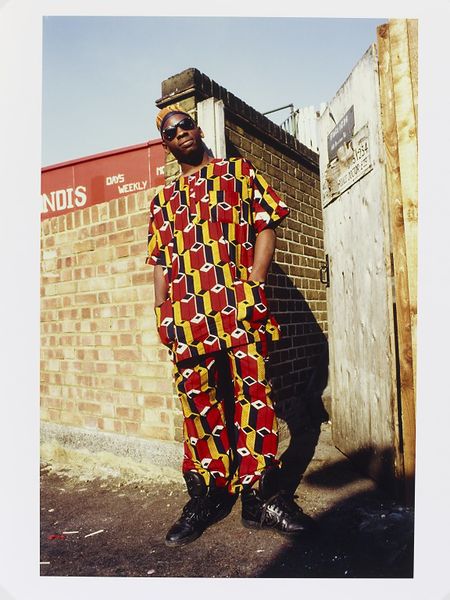