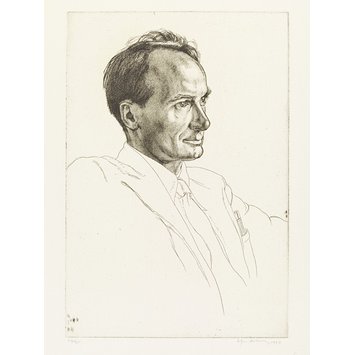 Portrait of A. W. Wheen

This print by Edgar Holloway portrays the writer and translator A. W. Wheen. It is made in the same direction as the preparatory study (See E.280-2011). Holloway's preparatory drawing and print are of special interest for the study of portraiture and print making but also reflect the cultural milieu of British society in the 1930s-40s. Holloway and Wheen belonged to the same circle of intellectuals including artists and writers such as T.S Eliot and Herbert Read.

The artist; his widow Mrs Jennifer Holloway from whom bought by Mark Evans and given to the Museum in 2010.

This etching by Edgar Holloway portrays A. W. Wheen and is made in the same direction as the preparatory sketch (See E.280-2011). Edgar Holloway was a key figure in the British etching revival of the 1930s, whose career was blighted by the collapse of the print market before World War II.

Self-taught as an etcher, in 1931 he visited Campbell Dodgson, Keeper of Prints and Drawings at the British Museum and editor of Print Collectors' Quarterly, who acquired his work for himself and the Contemporary Art Society. Holloway had one-man shows at the Twenty-One Gallery in 1931 and 1934. His work was also well thought of by Martin Hardie at the V&A, the critic Malcolm Salaman and the etchers Muirhead Bone, Francis Dodd, Ernest Lumsden, James McBey and Joseph Webb. During 1934 he attended life-drawing classes at the Slade School of Art., supporting himself by selling work and portrait commissions.

The illustrator Alec Buckels introduced him to T.S. Eliot, Herbert Read, Stephen Spender and A.W. Wheen, who all sat to him. In 1935 the V&A purchased an impression of his etching of Read (E.1642-1935) and a coloured lino-cut of Chrysanthemums (E.1643-1935). Hardie's own impression of his etching of Wheen was given to the Ashmolean Museum in 1967.

His style reflects the pre-eminence of Rembrandt and Augustus John for portrait engravers of this date. This is the only example of Holloway's drawings in the V&A's collection (other examples can be found in the British Museum and The Ashmolean Museum in Cambridge).

Holloway's portrait of A.W. Wheen and its preparatory drawing are of special interest for the study of portraiture and print making while A.W. Wheen was a significant figure in the history of the V&A where he worked from 1924 to 1962 in the department of the National Art Library. Wheen expanded the National Art Library's holdings on avant-garde artists, publications in Eastern European and Oriental languages, and began its subject index in 1936. He was a friend of T.S. Eliot and Herbert Read, who also worked at the V&A from 1922-31.

Wheen is best known as the translator of Erich Maria Remarque's anti-war classic All Quiet on the Western Front, first published in March 1929. His semi-autobiographical novella Two Masters first appeared in The London Mercury in November 1924, and was re-issued by Faber & Faber in 1929. Following his death, his papers were deposited at the National Library of Australia. 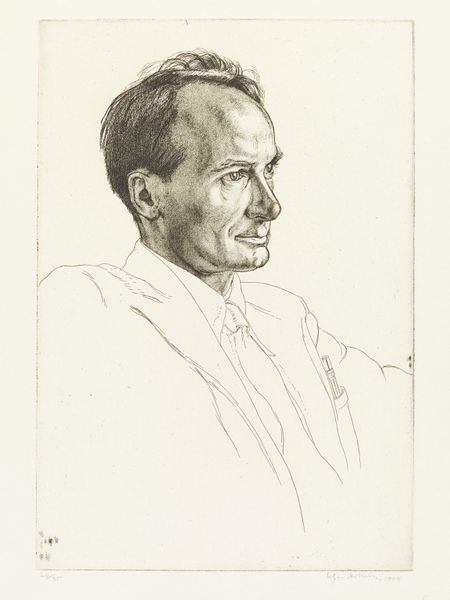