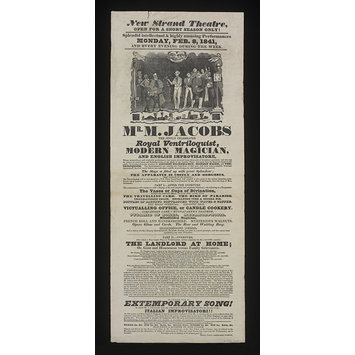 This playbill advertises Mr. Jacobs' appearance at London's New Strand Theatre in February 1841 for the week commencing 8th February. The woodcut illustration depicts Mr. Jacobs on stage, performing a magic trick in his one-man show. His show appears to have filled the entire evening's programme and included magic, ventriloquism, improvisation, and what is described on the playbill as 'a comic piece in ventriloquism' The Landlord at Home; or, Gout and Hoarseness versus Family Grievances. This featured eleven characters all played by Mr. Jacobs - presumably the characters shown surrounding him on stage in the woodcut.

We know from playbills in other collections, and from newspaper advertisements, that Mr. Jacobs performed in various venues in London, in the United Kingdom and abroad, - as far afield as Boston, USA in 1841; Australia, New Zealand and Tasmania. A playbill of 1849 was illustrated with an image of him performing at the Old Ship Assembly Rooms in Brighton in 1849 where he was described as 'The Wizard of Wizards, Great Modern Magician, Professor of Experimental Philosophist, Ventriloquist and Improvisatori', while a newspaper advertisement in the Hobart newspaper The Courier,15 April 1855, noted his success in Sydney during a four week season, and his forthcoming appearance in Hobart at the Royal Victoria Theatre. Another Tasmanian newspaper The Hobarton Mercury, 23 April 1855, advertising his appearance in Hobart that week at the Royal Victoria Theatre, listed some of his private appearances for nobility and the gentry, including three for the Royal Family - two at Buckingham Palace and one at Windsor Castle, one for Her Royal Highness the late Princess Augusta at the Brighton Pavilion, one for the Emperor of France at St. Cloud, one for the late Lord Lieutenant of Ireland, Earl de Grey at Dublin Castle, two at soirees given by the Duchess of Northumberland, two for the Duke of Norfolk, three for the Duchess of St. Alban at Brighton, one for the late Duke of Wellington at Walmer Castle, two for Lord and Lady Raglan at Dover, one for the Marchioness of Cornwallis at Portland Place, one for the Lord Bishop of Rochester in Cavendish Square, one for the Earl and Countess of Mulgrave at Whitby Castle, two for Lady Jane Peel at Sussex Square, Brighton, two for the Duchess of Bedford at Bedford, one for the Earl and Countess of Morley at Saltram House, one for Baron Rothschild at Brighton, one for Lord Cottenham, Bruton Street, one for Sir John Cain Hobhouse, one for Sir Charles and Lady Bagon's, Eaton Square, London, and two for Lady Jane Peel in Sussex Square, Brighton.

In 1866 Mr. Jacobs was in New Zealand, where, according to The Wellington Independent, he was presented with a silver cup on 13th January 1866, to mark the end of his run of successful appearances at the Theatre Royal, Dunedin.

Pictorial and typographic. Depicting Mr. Jacobs performing what appears to be the bird of paradise magic trick on stage, surrounded by presumably the characters impersonated by Mr. Jacobs in his 'comic piece in ventriloquism entitled The Landlord at Home; or, Gout and Hoarseness versus Family Grievance.