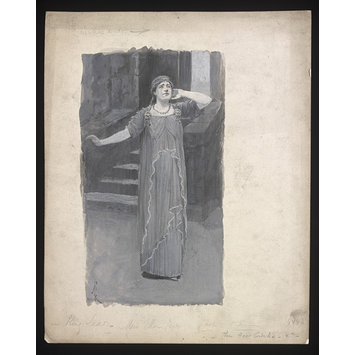 This painted illustration shows the actress Dame Ellen Terry (1847-1928) in the role of Cordelia in the 1892 production of King Lear by William Shakespeare at the Lyceum Theatre. It was painted by Sir Amédée Forestier (1854 – 1930) for reproduction in an illustrated magazine or newspaper and is signed with his initials.

This production starred the actor and manager Sir Henry Irving (1838-1905) in the role of King Lear and ran for 76 performances, an unprecedented achievement at the time for a play which was not popular with audiences on account of its gloomy and depressing themes.

Terry and Irving were among the leading stage of the Victorian Era, Irving becoming the first actor to receive a knighthood in 1895. Their on-stage partnership began in 1878 when Irving first engaged Terry as his leading lady. Their first production together was Hamlet and featured Irving in the title role with Terry as Ophelia. They worked together for over twenty years, their final performance at the Lycuem taking place in 1902 when the pair appeared together in a production of the Merchant of Venice. Irving played the role of Shylock and Terry that of Portia.

Sir Amédée Forestier (1854 – 1930) was an Anglo-French artist and illustrator. He began working for the Illustrated London News in 1882 and became known for his attention to detail and historical illustrations.

This item is one of several theatrical drawings from a collection of sketches commissioned from contemporary artists to be printed in illustrated magazines. The collection was donated to the museum by Sir William James Ingram in 1914.

Painted illustration in tones of grey, black and white, created for publication in an illustrated magazine or newspaper.
It shows a full length image of the actress Dame Ellen Terry (1847-1928) in the role of Cordelia in the 1892 production of King Lear at the Lyceum Theatre. She is dressed in a long, flowing, dress, the cut and detailing loosely inspired by classical dress. She is shown standing in front of a flight of stone steps, her right hand is outstretching, her left raised to her ear.
The image was painted by Sir Amédée Forestier (1854 – 1930) and is signed with his initials.

King Lear, Miss Ellen Terry, 1 act, [illegible]
Handwritten annotation in pencil at the base of the painting

A.F.R.
Artist's signature at the bottom left of the image

Vol.CI.p.637. 1892
Handwritten annotation in pencil on the rear of the image

Sir William Ingram (27 October 1847 – 18 December 1924) was a Liberal politician who was elected to, and sat, in the House of Commons on three occassions between 1878 and 1895. He was also the Managing Director of The Illustrated London News from the late 1870s until 1900 and became the proprietor of a number of additional publications including The Sketch and The English Illustrated Magazine.

The Illustrated London News was the world's first illustrated weekly newspaper. Founded by Sir William Ingram’s father, Herbert Ingram, in 1842 the first edition was sold on 14th May 1842 at a cost of sixpence per copy. Building from an original circulation of 26,000 to in excess of 300,000 at its peak, The Illustrated London News remained in print until 2003 and commissioned illustrations from many of the leading artists of the late nineteenth century. Photographs were used alongside illustrations from the late 19th century onwards but illustrations were a major feature of paper until after the end of the First World War.

This sketch was one of a group of prints and pencil and pen and ink sketches donated to the museum in 1914 by Sir William Ingram (1847–1924). Part of this collection was originally donated to the Prints and Drawings Department with the majority later passing to the Theatre and Performance Department. The full collection includes work by a variety of artists amongst whom are: A. J Finberg; Ralph Cleaver; F.V.Poole and Rossi Ashton. Though not all the publications for which they were created are identified the majority of the sketches were commissioned for, and appeared in, The Illustrated London News, The English Illustrated Magazine or The Sketch.

Sir William Ingram became the proprietor of The Illustrated London News in the mid to late 1870s and remained in post until circa 1900 when he was succeeded by his he was succeeded by his son, Bruce Stirling Ingram (1877–1963). He also became the proprietor of The Sketch amongst other papers in which capacity he gave commissions to many leading artists of the late nineteenth and early twentieth century.

Painted illustration created for publication. It shows the actress Dame Ellen Terry (1847-1928) in the role of Cordelia in the 1892 production of King Lear by William Shakespeare at the Lyceum Theatre. It was painted by Sir Amédée Forestier (1854 – 1930) and is signed with his initials. Given by Sir William Ingram in 1914. 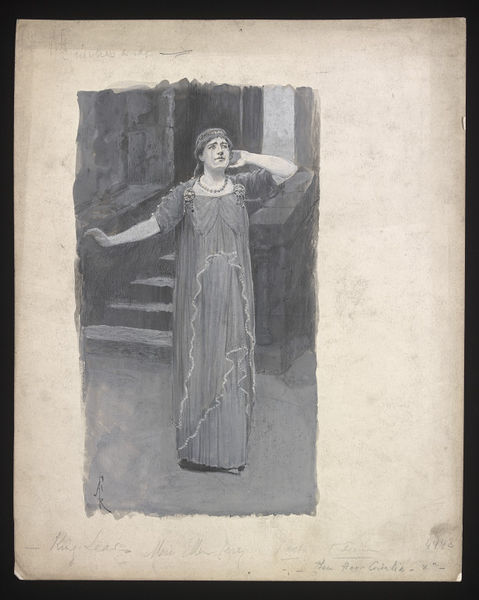