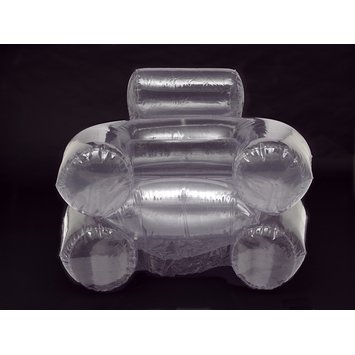 Part of a wider group of contemporary inflatable and disposable furniture, the Blow chair was the first inflatable chair to be mass produced. It was first manufactured in 1968 using new materials and production techniques: the pieces of its pvc skin are joined by high frequency welded seams. Produced as a moveable and ephemeral piece of furniture, the Blow chair is an iconic late 1960s design. It is imbued with the fun, fashion and freedom that the Pop generation imagined for the society of the future.

Inflatable armchair of clear PVC (polyvinyl chloride) with a removable seat cushion and an air pump.

The chair is made from sheets of PVC that have been joined together using high-frequency welding. The PVC sheets are first produced to a specific thickness by calendering the plastic on reels. The thin sheets of PVC obtained from this process are unrolled and mechanically cut into specifically-shaped pieces. Each of these pieces forms one part of the chair - back, arm rest, head rest. The individual pieces are then joined together using high frequency welding, a process in which high frequency waves are passed through the plastic. The high frequency field causes the molecules of the PVC to move and get hot, and the combination of this heat under pressure seals the cells of the material together permanently.

This process has been used to manufacture the Blow chair since 1968. The chair was originally produced in yellow, blue and red, as well as clear, PVC.

Italy (designed and made)

From the mid-1960s, the Zanotta furniture company began to manufacture furniture from avant-garde designers, often experimenting with new materials. The Blow chair was the first inflatable chair to be mass-produced. Its design used the newly fashionable material of pvc, while its construction depended on the recent development of high frequency welding, a technology that made its structure and transparency possible.

The Blow chair was designed as a fun, moveable and ephemeral piece of furniture that could be used both inside and outside. Intended to have a short life span, the materials and form of the chair, as well as its flexibility of use, made it an iconic design of the Pop generation.

The Blow chair plays with a notion of furniture as fashion, rather than function. Through its unconventional materials, it is linked to the 1960s fashion for pvc clothing. Brightly-coloured and semi-disposable, it also fits itself into the cycles and wants of the fashion seasons.

The chair formed part of a wider group of disposable and inflatable furniture produced in the late 1960s. Inflatable furniture was fashionable at the same time that architects were developing plans for inflatable structures and inflatable cities - a model for a large-scale inflatable structure was produced by De Pas, D'Urbino and Lomazzi for the Osaka World's Fair in 1967. In their daring do-it-yourself construction and seeming transience, these inflatable environments and their furniture counterparts offered an exciting challenge to the solidity of established modes of living and building.

The story of upholstery is full of experiments with different materials. This chair uses a modern plastic with a radical filler material, air, so that it weighs almost nothing. The PVC sheet is machine-cut into parts, a valve inserted where necessary, and the seams welded.

The 'Blow chair' was intended to be cheaper than conventional, more cumbersome chairs.
[01/12/2012] 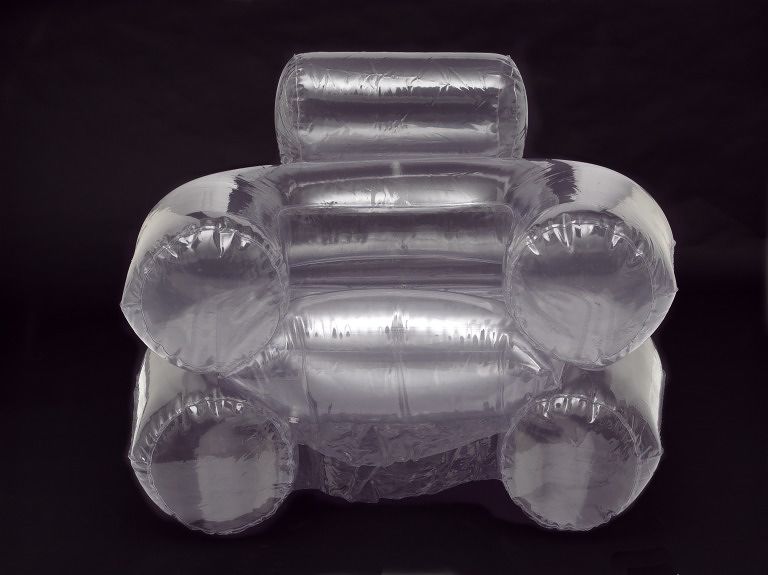