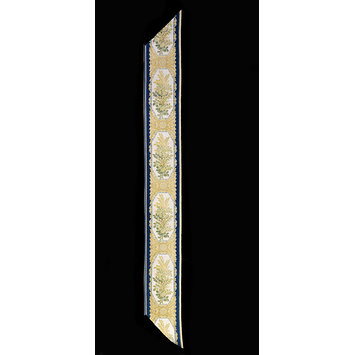 The silk weaving industry of Lyon enjoyed a unique position until the French Revolution. The innovative designs and technical skill of the weavers ensured that their silks were popular with aristocratic clients throughout Europe, and official commissions from the Garde-Meuble de la Couronne, the office which organised the furnishing of royal palaces, effectively subsidised the silk manufacturers during times of war and economic instability. But during the years between the fall of the monarchy in 1792 and Napoleon's Coronation in 1804 the silk industry was almost destroyed by political conflict. A few manufacturers continued, sustained by clients in Russia, Sweden, Prussia and Switzerland, and in 1795 King Carlos IV of Spain ordered newly fashionable Neoclassical fabrics from the famous firm of Camille Pernon.

Napoleon's first orders for silk from Lyon came during the Consulat in 1802, and from then he made it a priority to promote the city and revive its weaving industry. It was hoped that this would be achieved largely through the re-furnishing of the palaces emptied during the Revolution, firstly of the Tuileries, and then many other official residences once enjoyed by Louis XVI, and others beyond the borders of France including the palaces at Strasbourg and the Pitti Palace in Florence. The Garde-Meuble de la Couronne was renamed the Mobilier Imperial. Despite orders for many thousands of metres of silk for the residences of Napoleon and his family, The Lyons manufacturers were still struggling. In 1811 Napoleon ordered 80,000 metres of plain and figured fabrics for Versailles, for furnishing the grand apartments of the imperial couple and rooms for ministers and officers. Grand Frères, the company that was the successor to Pernon, were commissioned to weave many of the spectacular silks required.

The Emperor's interest in the silk industry extended to encouraging innovation in the improvement of looms, and in the development of new dyes resistant to fading. This section of a woven silk border was designed with a co-ordinating silk hanging for a room in Versailles, although it was never used. The designs were part of a dye experiment, and woven using silk dyed with indigo at the Gobelins tapestry workshop at the same time as another hanging and border were created using silk dyed with woad, the border showing a woad flower instead. Both versions were found to be satisfactory, although were not used as planned. Most of this border was eventually used in 1821, after the Restoration of the Bourbons, in the apartment of the Duchesse de Berry.

Woven silk satin border. Wide border with a selvedge on the right side only. Woven with a satin ground, white within the cartouches and dark blue without. The cartouches are woven in shades of yellow and brown, separated by a classical motif containing a rosette, and edged with bright blue to form an octagonal shape. On these white satin octagons are brocaded leafy stems of flowers in indigo, yellow and greens, with touches of pink and red. Ground warp of white silk. Ground weft of white silk. Pattern warps of dark blue and white silk. Pattern weft of yellow silk plus brocaded silks in pale blue, dark blue, brown, yellow, pink, red and green. The brocaded wefts are bound in 1/3 twill.

The silk was woven originally for a room in Napoleon's apartments in Versailles. The hangings were delivered in 1813, approved but never used. The borders eventually formed part of the decoration of the apartment of the Duchesse de Berry in 1821.

The silk was woven originally for a room in Napoleon's apartments at Versailles. The central panels varied but the borders were all similar apart from the cartouches which contained a plant of woad or indigo - in this case indigo. Samples of both dyestuffs were tried out for their fastness to light. The hangings were delivered in 1813, approved but never used. The borders eventually formed part of the decoration of the apartment of the Duchesse de Berry in 1821. There is another piece in the Mobilier National in Paris. [1987-2006]