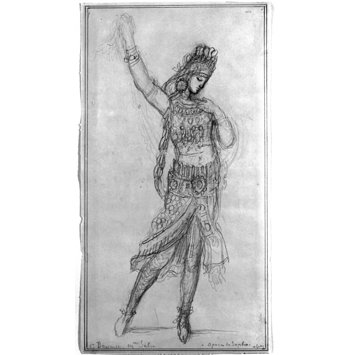 Costume design for a dancer in the opera Sapho

This drawing in pencil is part of a series of costume designs for the première danseuse in Gounod's 1884 revival of the opera Sapho. The dancer is poised en pointe; her elaborately bejewelled costume and headdress are clearly influenced by Orientalist painting. Moreau was a highly original artist who focused on energetic eveluations of mythical and religious scenes. His works are often seen as a bridge to the Symbolist movement.

A costume design, drawn in pencil, for the première danseuse in Gounod's opera Sapho. The dancer is poised en pointe; her elaborately bejewelled costume and headdress are clearly influenced by Orientalist painting.

'GM'
Signed by the artist in pencil

This drawing depicts in pencil the Greek poetess, Sapho, dancing. Signed, ‘GM’ and inscribed, ‘lere Danseuse. Melle Subra. Opéra de Sapho’, it was to serve in part as a costume design portraying Mademoiselle Subra, the dancing star of the Paris Opera Company. Mademoiselle Subra may have performed Sapho at the 1884 revival of Charles Gounod’s opera, Sapho, at the Paris Opera (Palais Garnier). François Pierre Régnier, the Opera manager, asked Moreau to design the costumes for the production. However, the designs were eventually sold at a benefit for the widow of a former director, having not been utilized for unknown reasons.

The dancer’s elaborate dress was undoubedtly influenced by orientalist tastes. Moreau often used outside visual sources containing what was seen as new and exotic material; for further evidence of this see Sappho, also in the V&A’s collection ( P.11-1934), which shows her in a Japanese kimono inspired by popular prints being sold in Paris at the time.

The figure of Sappho reccurs many times in Moreau’s oeuvre and in particlular the artist re-worked her pose in several works. For instance, the dancer’s mood and stance are related to that of Salomé, in the oil paintings Salomé Dancing before Herod (Musée Gustave Moreau, Paris), and to the body of Apollo in Apollo victorious over the serpent Python, 1885, (National Gallery of Canada, Ottawa). Also reminiscent is the watercolour L'Apparition (Musée du Louvre, Paris), which Moreau exhibited at the Paris Salon in 1876, and a drawing of Salomé (Jean Ehrmann collection). In addition, two oil sketches representing Salomé, L'Apparition (Fogg Art Museum, Harvard) and Salomé Tatouée (Musée Gustave Moreau, Paris), are akin to the costume design.

Gustave Moreau, Costume design for a dancer in the opera Sapho
French School 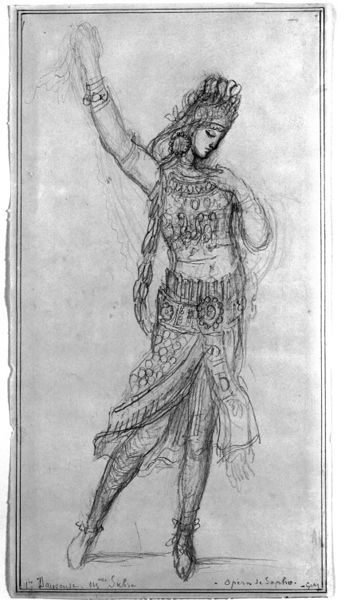