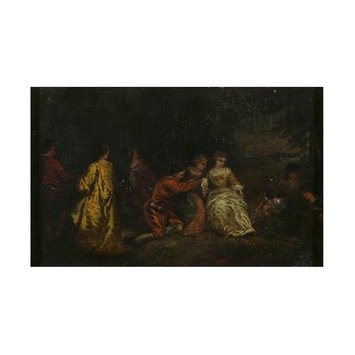 Antoine Watteau (1684-1721) was born in Valenciennes and trained there by Jacques-Albert Gérin (c. 1640-1702) or the sculptor Antoine-Joseph Pater (1670-1747), the father of Watteau's only pupil, Jean-Baptiste Pater (1695-1736). Watteau then reached Paris, probably around 1702 and may have met Claude Gillot (1673-1722) two or three years later and collaborated with him some years. Watteau was best known for his invention of the 'fête galante', which was exploited by many followers after his early death in 1721.

This painting was probably made by a follower of the French painter Antoine Watteau in the 18th century. It reproduces Watteau's most famous formula of the 'fête galantes', a genre that he created in the 1710s. It depicts elegant figures in a wooded landscape, which conveys a sense of mystery. Watteau had many followers in France and in England in the first half of the 18th century.

A garden scene with buildings in the background and ten figures in the foreground. Centre shows a a man returning a hankerchief to a woman in a white and yellow dress, next to her is another woman in blue and pink. On the right is a group consisting of a young woman playing with a child, a woman standing behind them and a man, seated, holding a wine glass. To the left a man in red leads two women, one in red, one in yellow from the scene, all of them looking back - the woman in red appears to be carrying a dog.

Historical significance: This painting is very close to the type of 'fête galante' Watteau developed between 1714 and 1718.
It depicts elegant figures in a landscape with a village in the right background. In the central foreground, a young man is holding a white handkerchief to a lady dressed in white. The poor conditions of the work, whose surface has darkened under the effect of the varnish, make its attribution difficult to assert.
However it seems to imitate some of Watteau's scenes, which look quite dark and convey a sense of mystery. The painting was doubtless made by a close follower who probably drew on such paintings as The Perspective in the Museum of Fine Arts, Boston, which display a similar arrangement of figures bathed in shade with shimmering dresses and, characteristically, a standing lady seen from the back, which is a recurrent Watteau's formula.
Watteau enjoyed a great success during his life and his works continued to be sought-after by collectors after his death, especially in England. Philippe Mercier, a Huguenot painter working in London from ca. 1716 to 1736, borrowed elements of his style while his art also influenced some artists such as William Hogarth (1697-1764).

Fête Champêtre. Oil painting by a 19th-century follower of Watteau.

This painting is a 19th-century imitation of the work of Watteau. 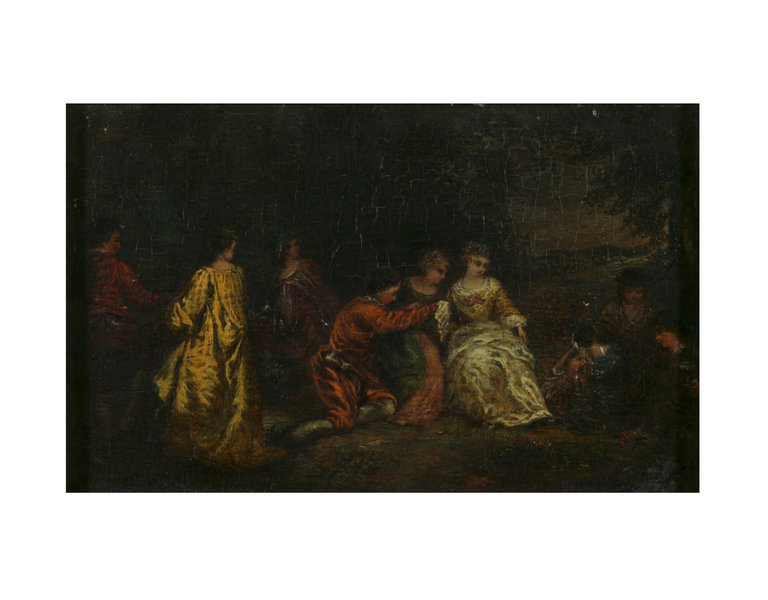