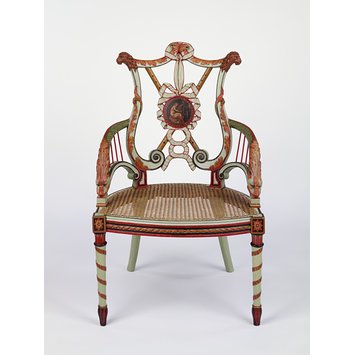 This chair (with its pair, W.18-1931) is part of a larger suite that may originally have furnished the Music Room at Woodhall Park, Hertfordshire. It is appropriately decorated with emblems of music - the back carved in the form of a lyre with two pipes crossed in the centre, the round medallions painted with female musicians. The arms, carved as dolphins, represent the dolphin that saved the life of the Greek poet and musician Arion. This chair is a rare example of 18th-century furniture retaining its original paint. Painted decoration was highly fashionable in the 1770s-80s, and the mixture of colours used here was intended to evoke the colouring of ancient Greek, or 'Etruscan' vases. The painted musicians in the backs of the chairs may be copied from engravings.

Armchair of carved beechwood, painted in naturalistic colours, the back of lyre-shaped outline, the splat in the form of two crossed flutes or pipes, with a ribbon-hung medallion, the arms carved as dolpins, the front legs carved with spirals of ribbon. The brass rods under the arms may be intended to suggest the strings of a lyre or harp. The seat is caned and set with a removeable squab cushion.

This armchair, and its pair (W.18-1931), were sold by Sotheby's, 13 March 1931, lot 101, by order of the executors of the late Col. Abel Henry Smith, as part of the furnishings of Woodhall Park, Hertfordshire. They were described as 'A RARE PAIR OF 18TH CENTURY PAINTED ARMCHAIRS with unusual backs carved with acanthus leaves and lion terminals; the splats decorated in the Pergolesi style with ribbon ties and the arms formed as dolphins, on turned, decorated legs'. The pair were purchased by the Museum from Moss Harris & Sons, Oxford Street, for £140 in the same year (See Registered File 31/3021, on Nominal File MA/1/H857 Harris Moss Sons). At the same time the Museum was offered the matching table by the London dealer Mr Botibol, but declined to buy it. At the time of the purchase it was noted 'Cane seats have been removed' so the current caning must have been done to make them ready for sale.

Woodhall Park was built in 1778 by the architect Thomas Leverton (1743-1824) for Thomas Rumbold (1736-1791). In 1777 the drawings for the house had been exhibited at the Royal Academy. In the same year, Rumbold was appointed as Governor of Madras, so left the building of the house to Leverton, returning only in 1779, at which time he was created a baronet. In 1782 the Engravings Room (for which these chairs may have been designed) was created, to the design of someone called R. Parker, who signed and dated an elevation of the room in that year. The house was sold (with its contents) after Rumbold's death to Paul Benfield (1742-1810), who had also made a fortune in India, and further enlarged the house considerably, either using Leverton or another architect. Leverton's original Eating Room was replaced with another Dining Room and at one point it was used as a Music Room (another possible site for the chairs originally). Benfield was declared bankrupt in 1799 and the house was once more sold in 1801. The sale particulars of that time reflect the alterations he had made to the original house. The house was purchased by a London banker, Samuel Smith, whose descendants still own it, although it has been leased to Heath Mount School since 1931.

The chairs were originally thought to have been made for the Engravings Room at Woodhall, where one was shown in the Country Life photos of 7 February 1925, pp. 202-3, but with a large set of oval-backed chairs. Subsequently a related mirror and table have come to the market (Christie's 17 November 1994, lots 75 and 76, withdrawn and re-offered 6 April 1995, lots 213 and 214). These pieces were similarly painted to the chairs but also ornamented with panels of rolled paper work. They were of a scale too small for the Engravings Room, so it is possible that all this furniture may have been made for Lady Rumbold's Dressing Room on the first floor, which, in sale particulars drawn up after 1779, were described as 'ornamented with prints'. It should be kept in mind, however, that, given the lyre iconography of the backs of the chairs (interestingly not mentioned in the 1931 Sotheby's sale), the chairs may have been designed for a Music Room. Margaret Jourdain (see below, writing in 1930), suggested that they should be dated later than the 1780s and proposed 1805 as their date. It is known that Leverton's original Eating Room was re-modelled as a Music Room (perhaps during Mr Benfield's tenure of the house, 1793-1801) but subsequently reverted to use as a dining room. It is possible that the chairs may relate to that project, although at present there is no firm evidence for this.

In a letter from the owner of Woodhall, Ralph Abel-Smith, to Country Life, 10 November 1977, p. 1374, one of the oval chairs illustrated in the Engravings Room in 1925 was illustrated, with a request to know of its current whereabouts. In that letter Mr Abel-Smith mentioned that Leverton may have been assisted in his designing by the architect Joseph Bonomi (1739-1808). Sir Hugh Roberts has discovered that one of the major suppliers of furniture to the house in the 1780s was the London partnership of Ince and Mayhew.

Sales of pieces from Woodhall Park
1779, sale of house with contents

The chairs were purchased from Messrs Moss Harris & Sons, 44 New Oxford Street, London WC1 in March 1931. There was some opposition to their idiosyncratic design at the time, when more standard versions of neo-classicism were more widely admired.

Armchair of carved beechwood, painted in naturalistic colours, the back of lyre-shaped outline, the splat in the form of two crossed flutes or pipes, with a ribbon-hung medallion, the arms carved as dolpins, the front legs carved with spirals of ribbon. The brass rods under the arms may be intended to suggest the strings of a lyre or harp. The seat is caned and set with a removeable squab cushion. 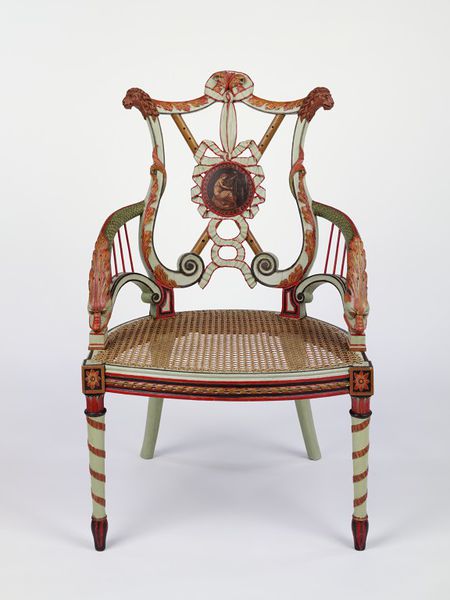