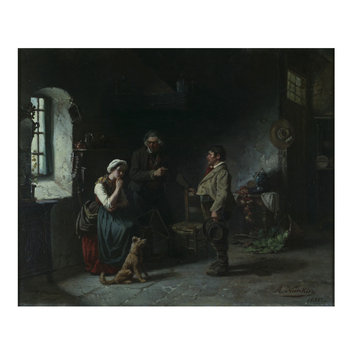 An Offer of Marriage

This painting is a fine example of Kunkler’s small oeuvre, mainly constituted of landscape and genre scene such as the repent one, and mostly owned by private collectors. This work shows an offer in marriage: are present the father, the daughter and the potential husband. The interest in rustic subject combine with a free realistic approach is typical of the Realist movement emerged in France in the 1840s. This painting is also a good example of the type of subject produced by the artists of the Düsseldorf school, influenced by the Biedermeier imagery.

A cottage interior with a woman seated on the far left with a dog at her feet, and older man, presumably her father in the centre and a deshevelled man to the right, with hat in hand.

Historical significance: This painting is a fine example of the output of the Düsseldorf school, an artistic movement developed in Düsseldorf, germany under the influence of the French Realist painters, the Biedermeier imagery and the proximity of the Netherlands which facilitates the influence of the work of such 17th-century Dutch masters as Gerrit Dou and Gabriel Metsu and such contemporary Dutch and Belgian genre painters as Ferdinand De Braekeleer. By the 1850s much of the work produced by the Düsseldorf school consisted of sentimental and anecdotal genre scenes, for example Knaus’s The Cardsharp (1851- Kunstmuseum, Düsseldorf). This type of painting was practised well into the 1880s by some of the original members and their followers.
This scene is set in the western European region of Savoy where Kunkler stayed in 1854. The Swiss-born artist travelled extensively in Savoy and Spain and was a keen observer of local customs. Here he shows the cottage interior in great detail, with its furniture, pots and pans and fresh vegetables for cooking. The scene is also one of awkward tension, with an unsuitable man presenting himself for marriage to a sceptical young woman. The elder man, presumably the woman's father, adds an element of ambiguity to the narrative as it is difficult to tell whether or not he supports the proposal.
This painting was bequeathed by the Rev. Townshend who owned a large collection of 19th-century landscape and genre paintings. It is not unlikely that Townshend, who resided part of the year in Lausanne, acquired this painting directly from the artist. 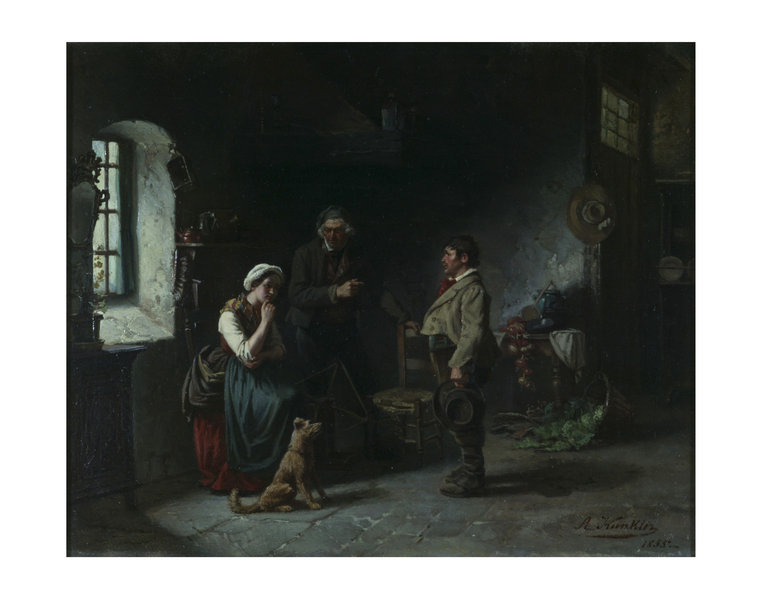